The title of this article is ambiguous. Further meanings are listed under Partido Socialista (disambiguation) .

The Partido Socialista [ pɐɾ'tidu susjɐ'liʃtɐ ] listen ? / i , abbreviated PS , in German Socialist Party , is a social democratic party and, alongside the conservative-liberal PSD , one of the two people 's parties in Portugal . The PS was on 19 April 1973 and supported by the German Social Democrats in Bad Münstereifel at the former capital of the Federal Republic of Germany , Bonn , by militant members of the Portuguese Socialist Movement ( Portuguese : Acção Socialista Portuguesa ) established that are in opposition to the right-wing dictatorship of the Estado Novo (1932–1974).

The PS is a member of the Socialist International and the Party of European Socialists and currently has seven members in the European Parliament . The socialist youth JS ( Juventude Socialista ) acts as the party's youth organization . Portugal Socialista and Acção Socialista appear as press organs of the PS . The Fundação Mário Soares Foundation is also part of the PS.

On September 28, 2014, Lisbon's Mayor António Costa was chosen as the top candidate for the 2015 general election . Costa prevailed in the internal party vote with 67.88% of the vote against General Secretary António José Seguro with 31.65%. Costa has been Prime Minister of Portugal since November 26, 2015. He defended his position in the 2019 general election .

The Portuguese Socialist Action ASP ( Acção Socialista Portuguesa ) , founded in Geneva in November 1964 by the opponents of Salazar, Mário Soares , Manuel Tito de Morais, Tierno Galvan and Francisco Ramos da Costa, among others, was to prove to be an important group for the later founding of the PS . The ASP built up a network of contacts in Portugal that were considered illegal during the dictatorship, developed connections to international socialist parties and organizations, published its own magazine, Portugal Socialista , since May 1967 , and became a member of the Socialist International (SI) in 1972 .

The ASP then became the Socialist Party of Portugal on April 19, 1973 with the support of the Socialist International and especially the Social Democratic Party of Germany (SPD) as well as the SPD-affiliated Friedrich Ebert Foundation in the wine house “An der Rauschen” in Bad Münstereifel, Germany founded. Mário Soares became their undisputed leader . Even after it was founded, the party was supported by the SPD with financial means amounting to millions, in particular for building up the party, training functionaries and for election campaigns. In addition, Willy Brandt helped Mário Soares to gain reputation through joint international appearances.

After the Carnation Revolution of 1974, the PS managed to develop from a cadre party to a people 's party . The party played a decisive role in the implementation and consolidation of democratic structures in Portugal and was or is involved in many governments (see Third Republic ).

From 2005 to 2011, the PS was the sole ruling party under Prime Minister José Sócrates . After the new elections to the Portuguese Parliament on February 20, 2005, he became Prime Minister. For the first time in its history, the party won an absolute majority (120 of 230 seats). Long-time Portuguese President Jorge Sampaio was also a member of the party, while his successor Aníbal Cavaco Silva belongs to the conservative Partido Social Democrata . The party's leader was Eduardo Ferro Rodrigues until October 2004 , although he resigned on July 9, 2004 in protest against the decision of the president who, despite the move of José Manuel Barroso to the chair of the European Commission, did not call for new elections. In October he was succeeded by José Sócrates. 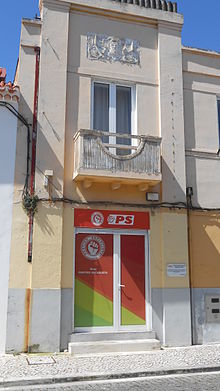 Office of the Partido Socialista in Montemor-o-Velho

On their VI. At the 1986 congress in Lisbon, the party adopted programmatic orientations whose basic orientation is still valid today. In the first section of the “Basic Principles” it is defined: “The PS is a political organization of the Portuguese who seek the solution of national problems and the answer to the socio-political requirements of our time in democratic socialism.” Party congress in November 2002 confirmed and supplemented by the "clear defense of democracy".

1 In the Republican and Socialist Front , with the Left Union of Socialist Democracy and Independent Social Democratic Action .

Parties represented by Portugal in the Assembleia da República