Map of the Kingdom of Portugal from the 16th century, showing the delimitation to the Algarve (in the far south) at that time 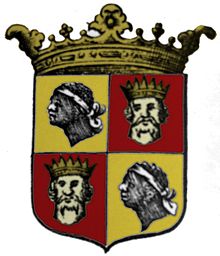 The Kingdom of Algarve ( Portuguese : Reino do Algarve ; Arabic : al-Gharb al-Ândaluz or al-Gharb ) was a historic area in the Região do Algarve , Portugal .

For centuries, until the proclamation of the Republic of Portugal on October 5, 1910, the Algarve was the second kingdom of the Portuguese crown - a mere titular kingdom that itself had no institutions, charter or privileges, or any kind of independence . In practice it was just an honorary title for a region / comarca that was in no way differentiated from the rest of Portugal.

The title Rei do Algarve was never awarded independently in Portugal or used as a title, but always mentioned together with Portugal. The king was crowned as Rei de Portugal e do Algarve until 1471 , afterwards as Rei de Portugal e dos Algarves. The purpose of emphasizing the Algarve in the royal title was to clearly emphasize in this way that the Algarve is part of Portugal, and thus above all to reject Castilian / Spanish and Moorish claims, because Alfonso X of Castile and the Moorish Emir of Niebla also led the title of King of the Algarve.

The title Rei do Algarve was first used by Sancho I of Portugal , during the first conquest of Silves in 1189. Silves was a city of the Almohad Empire , which at that time wanted to bring Al-Andalus under his rule.

This new royal title is explained by the tradition of the Iberian Peninsula , in which the title of monarch is also derived from his achievements; for example, the kings of Castile and León were also Rei de Toledo, de Sevilha, etc.

After the Muslim reconquest of Silves in 1191, the king stopped using this title.

Arco do Repouso (English arch of relaxation) at the Muralhas de Faro , where (according to legend) King Alfonso III. rested at the end of the Reconquista

From 1228 the Almohad Empire split into several smaller emirates , the Taifa kingdoms . South of Portugal was the Muslim, fortified Taifa empire of Niebla , whose emir Musa ibn Mohammad ibn Nassir ibn Mahfuz , appointed himself Rei do Algarve (amir al-Gharb) a short time later . At the time, the region was the westernmost of the Muslim sphere of influence in Andalusia. At the same time, the Castilian and Portuguese conquests towards the south began.

During the reign of King Sancho II , the last settlements in the Alentejo were conquered and also most of the Algarve, west of the right bank of the Guadiana river ; as a result, only small Muslim enclaves remained in Aljezur , Faro , Loulé and Albufeira , which, due to their spatial separation from the Taifa de Niebla, became independent of their ruler's seat.

Sancho II of Portugal did not yet hold the title of King of the Algarve, probably due to the clashes and the civil war against his brother, the Count of Boulogne and Prince Alfons .

In fact, it was his brother who was named Alfonso III in 1248. ascended the throne, and achieved the final conquest of the Moorish enclaves in the Algarve. In 1249, as the second Portuguese king after his grandfather, he assumed the title of Rei de Portugal e do Algarve , which was used by his successors until the end of the monarchy in Portugal.

The title of Alfons III is very likely. by Portugal as a reaction to the position of the Castilian neighbors, and designed to consolidate the rights of the Portuguese monarch over the affected region, even without charter, privileges or autonomy.

The problem was finally resolved between the rulers of Castile and Portugal with the Treaty of Badajoz of 1267 ; King Alfonso X gave up his claim to the former territories of Gharb al-Ândalus in Portugal, on the condition that his grandson Dionysius , son of Alfonso III. and Beatrix of Castile , heir to the throne of the Algarve, thereby recognizing their incorporation into the Portuguese Empire. In return, Alfonso X was allowed to continue to use the title for himself and his descendants, since in 1262 he had acquired the remains of the Kingdom of Niebla / Algarve east of the Odiana ( Guadiana ). The kings of Castile and later Spain used this title as one of the numerous titles of the king until Isabel II ascended the throne (1833).

→ Main article : Algarve across the sea

In Portugal, the name of the Algarvian kingdom and with it the title of king underwent some changes as a result of the North African conquests, whose territory was considered an extension of the kingdom. So John I of Portugal added the title of Rei de Portugal e do Algarve the title Senhor de Ceuta , his grandson Alfons V , reversed this, which after 1458 led to Senhor de Ceuta e de Alcácer-Ceguer em África .

In 1471, with the conquest of Asilah , Tangier and Larache, the North African places were combined to form the Algarve d'além-mar em África (roughly: "Overseas Algarve"), with the European areas becoming the Algarve d'aquém-mar .

So, from the Kingdom Reino do Algarve , the Reino dos Algarve, which included the North African possessions of the Portuguese crown and the areas of the European Kingdom of the Algarve.

The kings of Portugal used the title until the fall of the monarchy: Reis de Portugal e dos Algarves d'aquém e d'além-mar em África - even after leaving the last Moroccan possession Mazagão ( El Jadida ) in 1769.