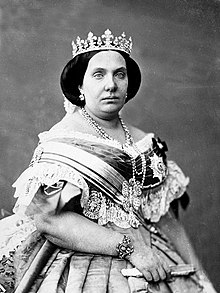 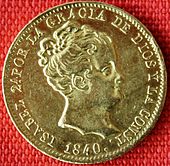 Isabella was the daughter of King Ferdinand VII of Spain (1784–1833) and his fourth wife, Maria Christina of Sicily . She became queen after the death of her father at the age of two (September 29, 1833). Her father had the so-called Sali law repealed on March 29, 1830 , which restored the old cognatic Castilian line of succession . Her mother was her guardian.

Against the indignation of the supporters of the deceased Ferdinand VII's brother, Carlos María Isidro de Borbón (1788–1855), the Carlist , who were excluded from the throne , the Queen Mother Maria Christina secured the throne through her connection with the liberal parties of her daughter. In 1840 Maria Christina was ousted from the reign and left Spain. Ten year old Isabella remained queen under the reign of General Baldomero Espartero .

Isabella was declared majorenn ("of age") on November 8, 1843 at the age of 13 by decision of the Cortes . The question of their marriage had a European dimension. The French King Louis Philip I claimed the Spanish throne for his dynasty. England objected to this.

Queen Isabella II married on October 10, 1846, on her 16th birthday, her cousin Franz d'Assisi (1822-1902), the son of the Infante Franz de Paula (1794-1865), who in turn was a son of King Charles IV of Spain was. With that, Isabella and her husband were both grandsons of this king; the married couple's fathers were brothers. In addition, the mothers of the spouses were siblings from the House of Bourbon-Sicily . Franz was a sickly man. At the same time, Isabella's sister Luisa Fernanda (1832-1897) was married to her son Ludwig Philipps, Duke of Montpensier (1824-1890). No children were expected from the marriage of the queen because of the apparently obvious incapacity of the prince consort; the French seemed to have achieved their intentions.

In the government of her country, the queen was dependent on her surroundings, in which the nun Patrocinio and the general manager Marfori had the most influence. Repeated uprisings changed the ministries, but brought no improvement to the government.

On February 2, 1852, the priest Martín Merino y Gómez wanted to kill Isabella II while leaving a church with a dagger, but only wounded her. He was executed .

In September 1868, an uprising to which various party leaders had allied put an end to their rule, just as they were with Emperor Napoleon III. had agreed to intervene in the Roman question in favor of the Pope ; she fled to France. In their place, Francisco Serrano Domínguez was installed as regent until, after a lengthy search, Amadeus of Savoy ascended the Spanish throne in early 1871 . One day after his abdication on February 10, 1873, the (First) Republic was proclaimed in Spain .

Isabella renounced the crown on June 25, 1870 in favor of her son. Alfonso XII was proclaimed king on December 29, 1874. His father was officially Franz d'Assisi; however, there are doubts about paternity. Isabella returned to Spain and lived partly there and partly in Paris, where she died on April 9, 1904. Shortly before her death she received Eugénie de Montijo ; after that her cold worsened. She was buried in the Pantheon of the Kings of the El Escorial Monastery.