Ludwig Ferdinand and his wife 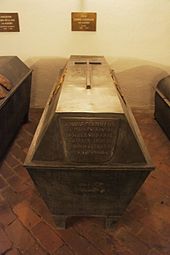 Ludwig Ferdinand's sarcophagus in the Wittelsbach crypt of St. Michael in Munich

Prince Ludwig Ferdinand Maria Karl Heinrich Adalbert Franz Philipp Andreas Konstantin of Bavaria and Infante of Spain (born October 22, 1859 in Madrid , † November 23, 1949 in Munich ) was a doctor , artist and philanthropist as well as general of the cavalry , general of the medical corps Royal Spanish Army and Honorary Surgeon of the Royal Spanish Academy.

Ludwig Ferdinand, Prince of Bavaria, medal in 1906 for the 25th anniversary celebration of his infantry regiment in Landau in the Palatinate .

He was the eldest son of Adalbert von Bayern (1828–1875), the Hereditary Prince of Greece from the House of Wittelsbach , and his wife Amalia del Pilar de Borbón , Infanta of Spain (1834–1905), daughter of Francisco de Paula de Borbón , Duke of Cádiz and his wife Luisa Carlota of Naples-Sicily . Prince Ludwig Ferdinand was the paternal nephew of King Maximilian II. Joseph , King Otto of Greece and the Prince Regent Luitpold , as well as the son-in-law of the Spanish Queen Isabella II.

Ludwig Ferdinand studied medicine in Heidelberg and Munich and worked after the state examination as a specialist in surgery and gynecology . From 1878 he lived in the Munich Palais Ludwig Ferdinand, which was later named after him . From 1883 to 1918 he was the owner of the 18th Infantry Regiment "Prince Ludwig Ferdinand" and chief of the 3rd Silesian Dragoon Regiment No. 15 . During the First World War he was station chief of the surgical department of the Munich garrison hospital . In 1886 he was elected a member of the Leopoldina . In 1894 he became an honorary member of the German Society for Internal Medicine (DGIM). He was an honorary member of the German Society for Gynecology and Obstetrics eV (DGGG).

In addition to the motor-loving brother of Kaiser Wilhelm II , Prince Heinrich of Prussia , Ludwig Ferdinand joined the "DMV" (German Motorist Association, founded in 1903) as the second member of the nobility in 1906, which joined ADAC (General German Automobile Club) in 1911 renamed. Even before that, from 1896, he was honorary president of the Academic Cyclist Association in Munich. Ludwig Ferdinand von Bayern was also known as a musician, among other things he put a poem "The clouds hang down gray" by Hildegard Stradal into music.

Ludwig Ferdinand was a first cousin of King Ludwig II of Bavaria , to whom he was the only one from the royal line of the Wittelsbach family. He and his wife were the only relatives of the shy king who were allowed to visit Herrenchiemsee Palace and dine in the winter garden of the Munich residence . The last letter that Ludwig II wrote three days before his death was addressed to Prince Ludwig Ferdinand. When he was captured at Neuschwanstein Castle in 1886, the incapacitated king telegraphed his cousin to help, who wanted to leave Nymphenburg immediately, but when he was forbidden to leave by Prince Regent Luitpold.

On April 2, 1883, he married his cousin María de la Paz , Infanta of Spain (1862-1946), daughter of Queen Isabella II of Spain and her husband, Duke Francisco de Asís, in Madrid . The marriage had three children:

The German Medical History Museum in Ingolstadt has in its collection instruments from Ludwig Ferdinand's Munich practice as well as an oil portrait of Ludwig Ferdinand in the uniform of a medical officer of the First World War.