The title of this article is ambiguous. Further meanings are listed under cocoa (disambiguation) . 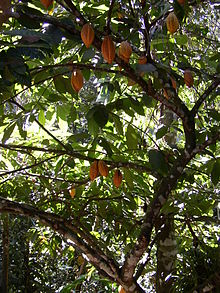 Cocoa ( Spanish cacao , after Nahuatl cacauatl : Kakauwasser) is a term that, depending on the context, describes a plant, its fruit juice, its seeds or products made from them.

The plant in question is usually the cocoa tree with the scientific name “Theobroma cacao”. Cocoa and chocolate are also made from other species of the cocoa tree genus . The juice from its pulp is called "suco de cacao" (cocoa juice) in Brazil . In Central America , such a juice was processed into alcoholic beverages as early as 1493 .

The seed of the cocoa tree is known as the cocoa bean . The cocoa bean is (today as in the past) an important vegetable raw material. In futures trading on the stock exchange, cocoa means the cocoa bean. In the past, cocoa beans were also used as a means of payment . For example, among the Aztecs, a turkey cost 200 cocoa beans. Today, the largest amount of cocoa per country is produced in the Ivory Coast , but because of the lack of investment security, only processed until the cocoa beans are dried.

Cocoa mass is extracted from the cocoa bean , and cocoa butter and cocoa powder are made from this . These products are used as ingredients for food and in the cosmetics industry. The Aztecs called the drink made from cocoa beans " xocóatl ", after " xócoc " (bitter) and " atl " (water), so bitter water. The word chocolate , derived from this, describes a solid, but easily meltable food made from components of cocoa beans and sugar (and possibly butter and vanilla), which was invented in the 19th century and further developed in the 20th century. Drinks containing cocoa are made from powdered drinks and are classified as sugar confectionery , while drinking chocolate (also known as cocoa) is classified as cocoa (drink) .

Traces of clay pots found in Santa Ana in the upper part of the Amazon basin in the southeast of the state of Ecuador show that the plant species "Theobroma cacao" has been there since at least about 3,300 BC. Was cultivated. Presumably this plant species originated there and was later spread across Central America to Tenochtitlan , today's Mexico City . The people who lived before about 3,300 BC BC who grew the cocoa tree did not yet use metal, but ceramics.