As cocoa (also hot chocolate, hot chocolate, chocolate milk or cocoa drink ) refers drinks consisting of a mixture of cocoa products with water or milk can be prepared. To prepare it, pure cocoa powder , instant powder containing cocoa , (bar) chocolate or a syrup containing cocoa is mixed with hot or cold water or hot or cold milk. In addition to pure cocoa powder, the primary products usually already contain sugar or other sweeteners ; otherwise these are often added during preparation. The end product is drunk both hot and cold.

See also : History of Cocoa Cultivation and the Cocoa Plant

In pre-Columbian , tropical America, cold, often unsweetened drinks were made from cocoa, which had little in common with what we were familiar with and probably even contained alcohol. The Spaniards brought cocoa to Europe in 1519 after the conquest of the Aztec Empire. In the 17th century it came to Germany as a medicine. First in German pharmacies, as a contemporary description describes: “The cocoa strengthens the stomach, stimulates the spirit of life, thins the juices and flowers, helps the lust for Venus, strengthens the head, relieves pain and is his praise for food as well as not almost enough to describe as a medicament. "

In European aristocratic circles it quickly developed into a fashion drink, which was said to be particularly digestible and all kinds of healing and aphrodisiac effects. Crucial for the spread of cocoa as a luxury food was the discovery that it becomes more aromatic when sweetened with cane sugar and meets the taste of many Europeans. Cocoa was Louis XIV's favorite drink and many rulers, big and small, wanted to emulate it. In the 18th century, the use of a trembleuse became fashionable in order to drink the precious beverage without loss.

At that time there was no distinction between the production of cocoa powder and cocoa mass , as the technique of de-oiling was still unknown. Cocoa was sold pressed into bars, raw plates from which pieces were broken off and weighed and which contained neither sugar nor milk and were not intended for direct consumption. The drink was prepared with water and sugar according to taste and budget, because cocoa was expensive.

This description comes from Anthelme Brillat-Savarin : “To prepare chocolate, that is, to make it suitable for immediate consumption, take about one and a half ounces in the cup and let it dissolve gently in gradually warmed water by using a wooden spatula stirs; then they are left to boil for a quarter of an hour so that the solution is complete, and they are served hot. (...) Sir, the superior of the Convent of the Visitation in Belley told me more than 50 years ago, if you want to drink good chocolate, have it prepared in a porcelain jug the evening before and let it stand there. Standing overnight concentrates it and gives it a delicate taste which makes it much more pleasant. The good God cannot be angry about this little refinement, he is himself the highest excellence. ” (Quoted from Philippe Suchard , Neuchâtel 1885)

Later, cocoa was mainly used as a children's drink, which, after a large part of its nutritional value had been removed by the deoiling , was increasingly made with milk instead of water in order to increase its nutritional value again and to reduce its bitterness. The de-oiling of cocoa powder was patented by van Houten in 1828 and initiated the separation of the commercial forms into cocoa powder for beverages and chocolate bars for direct consumption.

Today, traditional chocolate can practically no longer be prepared because neither cocoa powder nor chocolate bars match the original ingredient. The best approximation should be dark chocolate with the highest possible cocoa content; certain shops also offer pure cocoa. The preparation with cocoa powder, milk and sugar has also been on the decline since there were instant cocoa drinks that, in addition to rather little cocoa and a lot of sugar , contain various flavorings , emulsifiers and sometimes milk powder . The Swiss company Nestlé with the Nesquik brand and Mondelēz with the Kaba and Suchard Express brands are among the market leaders for these instant products in German-speaking countries . Raw cocoa mass is widespread in industrial wholesaling because the manufacturing and trading qualities have changed little so far.

There are different types of preparation for beverages containing cocoa, which differ in ingredients but also in the preparation method. These are traditionally based and regionally shaped.

For all cocoa-containing beverages , they should only be heated, but not boiled, as otherwise the aroma of the cocoa will suffer.

Preparation based on whole cocoa beans

In Mexico and Jamaica, whole roasted cocoa beans, which are ground into a firm paste, are traditionally still used to prepare drinking chocolate. These are commercially available on site in spherical form (Jamaica) or tablet form (Mexico). Usually the drinks are whipped with water until they are frothy and spices such as cinnamon are added. The aroma differs from the cocoa drinks known in Europe.

The preparation with chocolate is usually a hot drink .

In many European countries such as France, Italy, Austria, Great Britain and Switzerland, preparations based on chocolate are common. Bitter or milk chocolate is used. Depending on the region, the chocolate is prepared with water, milk or a mixture of both and is often whipped until frothy. It is also customary in the region to alloy the drinking chocolate by adding starch (Spain), egg yolk (Austria) or additional cocoa powder (Italy) to achieve a rather thick consistency. In Italy, cocoa powder is also foamed into a pudding-like mass with the wet steam from the steam nozzle of the coffee machines ( espresso machines ) commonly used in catering . These types of preparation differ significantly in intensity and sweetness. 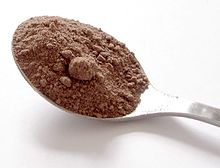 Spoon with instant cocoa powder, which contains around 80% sugar, for preparation with milk

Beverages based on cocoa powder , which is available in stores with low or high levels of oil, are prepared with milk, water or a mixture of both. Whipped cream (cream) is also added regionally to the liquid. Since cocoa powder without additives (in contrast to the usual instant products such as cocoa granules) is only sparingly soluble in cold liquid, it is first mixed with a little liquid to form a paste during preparation. This pulp can now be stirred into hot liquid (this method preserves the aroma best) or heated with the liquid.

All types of preparation mentioned can also be flavored. The traditional spices vanilla or cinnamon are common , but recently the preparation with chilli has also come into fashion in Europe (again) . In addition, cocoa drinks are also flavored with spirits . Often, brandy , vodka or rum used these mixed drinks are in German-speaking as Russian chocolate called. A well-known cocoa drink with rum is the Lumumba .

The color of the cup seems to have a proven influence on the taste experience of cocoa beverages: Research showed that hot chocolate tastes best when drunk from an orange cup, followed by the cream cup. The identical chocolate, however, was found to be less tasty when served in a white or red mug. The observation that the human perception of taste can be strongly influenced by colors corresponds to previous studies: it was shown that the color red makes spicy dishes appear hotter, whereas drinks from blue containers are perceived as more refreshing than from red ones.