Peter Ugelheimer even Ugelnheimer (* ca. 1442 / 1446 in Frankfurt am Main , † before 10. January 1488 in Milan ) was a Venetian- German merchant, bookseller and bibliophile. He is also known as the host of the German pilgrimage group around Bernhard von Breydenbach , Erhard Reuwich and Count Johann zu Solms on the way to Palestine. 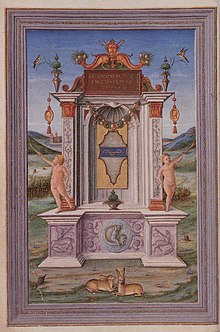 The Ugel (n) heimer family originally comes from the Palatinate, the name is derived from the spelling of Iggelheim at the time. Peter's grandfather Hans came to Frankfurt from Worms. His son Peter Ugelnheimer the Elder, who died in 1463. Ä., The father Peters d. J., has certainly already traded with Venice for the Blum company; his son of the same name is likely to have followed him in it from a young age. Alexander Dietz knew another source according to which the younger Peter became a partner in the Blum Society in 1468. As early as 1469 he acquired a copy of the Pliny edition printed by Johannes von Speyer in Venice and had it painted in the northern Italian Renaissance style. Perhaps he was a factor for society, at least a representative of the Blum Society.

By 1476/77 at the latest, he started his own business in Venice as a partner of the outstanding French printer Nicolas Jenson and the Frankfurt merchant Johann Rauchfass (d. 1478). He had a deep friendship with Jenson, who must have learned to print in Mainz. In 1480 Peter was instrumental in founding the printing company "Johannes de Colonia, Nicolas Jenson et socii". Before the end of 1480, after Jenson's death and the departure of Johann von Köln , he seems to have taken over responsibility for the company's printing up to around 1483.

In Venice, after a certain point in time, Ugelheimer no longer lived in the Fondaco dei Tedeschi but with his wife Margarete, nee. Molle, in what appeared to be a stately home in the municipality of San Paternian that also served as a warehouse. The pilgrims around Bernhard von Breydenbach stayed there for 22 days in 1483. Breydenbach later recommended Ugelheimer's house in his travel briefing as the ideal accommodation in Venice. In 1488 his widow is occupied in a house in San Bartolomeo.

In 1484 Ugelheimer largely gave up his book trade empire. Contrary to the older view, he never seems to have planned to leave Venice for good. In the summer of 1486 he announced the postponement of the trade fair to German merchants in Venice for the Frankfurt Council. On December 16, 1487, Ugelheimer drew up the will he received on site in Milan. He wanted to be buried in the newly built Dominican church of Santa Maria delle Grazie in Milan or perhaps in the associated cloister; his grave has not been preserved.

With the support of the Venetian administration, Peter's widow Margarete collected her husband's outstanding debts in Milan, while she sold the couple's real estate in Frankfurt. In Venice she acted as a long-distance trader and de facto publisher; Among other things, she had Aldus Manutius print the edition of the letters of Catherine of Siena in 1499 .

The family coat of arms is a blue bar with a gold fetter in silver.