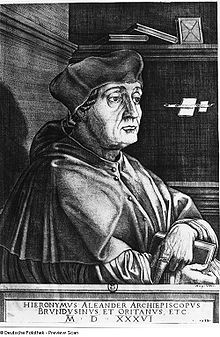 Aleander was the son of a doctor from a noble family and initially studied medicine, but then theology and ancient languages at the University of Padua . From 1499 he taught ancient and oriental languages in Venice . There he became one of the leading members of the group of scholars around the humanist printer Aldus Manutius . In 1501 Pope Alexander VI appointed him . to Rome and entrusted him with diplomatic tasks. During his travels he became acquainted and familiar with Erasmus of Rotterdam , among others . In 1508 he went to the University of Paris as a teacher of ancient languages ; there he introduced the systematic study of the Greek language. During his time as a philology teacher in Venice and Paris, he was the editor of ancient Greek authors and wrote a Greek grammar . His Lexicon graeco-latinum , which appeared in Paris in 1512, was groundbreaking . After a short stay in Orléans (possibly to avoid the plague ) he was elected rector of the University of Paris in 1513 . In the same year he turned back to politics: he entered the service of Louis XII. and became chancellor of the Liège prince-bishop and finally in 1517 (-1519?) head of the Vatican library in Rome .

In September 1520, Pope Leo X sent him to the court of Charles V as nuncio to mobilize the emperor and empire against the Reformation . He played a decisive role at the Reichstag in Worms . In a famous speech on Ash Wednesday 1521, he demanded that Martin Luther be given eight immediately . However, he was unable to enforce this demand: Luther was summoned. The draft of the Edict of Worms came from his pen (which led to a break with Erasmus). He then also caused the adoption of this document.

In 1524 Aleander became Archbishop of Brindisi and nuncio to Francis I in France. Together with this he was captured in the Battle of Pavia (1525) . Later he was also on several diplomatic missions on behalf of the Holy See, mainly with the task of preventing a peaceful settlement of the religious parties in the German Reich. However , he could not prevent the religious peace in Nuremberg (1532). 1538 Aleander was from Pope Paul III. elevated to cardinal . His titular church was San Crisogono . Four years later he died in Rome.

For the history of the Reformation (and the beginning of the Counter-Reformation ) his letters as well as his diaries are informative documents.