Johann (es) (von) Amerbach (Latin: Johannes Amerbacensis or Amorbachius , de Amerbach , actually Johannes Welcker called Amerbach ; * around 1440 in Amorbach ; † December 25, 1513 in Basel ) was a printer and publisher of the incunable period in Basel. 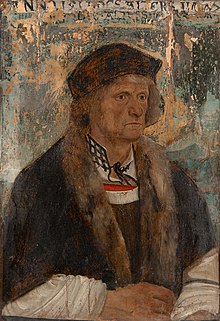 Amerbach was born as the son of Mayor Peter Welcker. He studied at the Sorbonne in Paris , where he was a student of Johannes de Lapide , who introduced printing in the French capital. There he acquired the academic degree of a Baccalaureus in 1461 and in 1462 that of a Magister artium liberalium . He then probably stayed for a short time in Venice , the center of humanistic printing. This is concluded from the fact that Amerbach was also called Johannes de Venetiis , Hans Venediger or Hans von Venice von Emrebach by contemporaries . It cannot be said with any certainty whether he has already trained as a printer or bookseller there. On the other hand, his presence in Basel has been guaranteed since 1477. Amerbach began working as a printer there shortly after his arrival. As far as we know today, his first print was a German almanac for 1478, which must have been published by the beginning of this year at the latest. The first major work should have been the Latin lexicon Vocabularius breviloquus written by Johannes Reuchlin .

In August 1481 Johann Amerbach became a member of the Basler Zunft zu Safran , which in addition to spice dealers included numerous other professions, and in May 1484 citizens of Basel. In 1482 he bought the house "zum Kaiserstuhl" in Kleinbasel near the Charterhouse, shortly after 1500 the house "zum Stuhl" in Grossbasel. The tax lists of that time show that Johann Amerbach quickly became extremely successful as a printer and businessman. The enterprising entrepreneur initially worked frequently with Jakob Wolff von Pforzheim , and later with Johannes Petri and Johann Froben . He had a close business relationship with the Nuremberg printer and publisher Anton Koberger as well as with Hans Grüninger in Strasbourg .

Johann Amerbach married Barbara in 1483, the widowed daughter of the Basel councilor Leonhard Ortenberg. From this marriage the sons Bruno (1484-1519), Basilius (1488-1535) and Bonifacius emerged. Only Basil practiced the father's profession for a short time.

In 1507 Johann Froben von Amerbach took over the printing works in the house "zum Stuhl" including all accessories. Johann Amerbach died on December 25, 1513 in Basel and was buried in the St. Margarethental Charterhouse .

His Parisian teacher Johannes Heynlin , who became a preacher at Basel Minster in 1484 and entered the Carthusian monastery of St. Margarethental as a monk in 1487, had a great influence on Johann Amerbach . Heynlin contributed to numerous editions, and Amerbach's project to publish the works of the great church fathers Ambrosius, Augustine, Pope Gregor and Hieronymus can also be traced back to him. Johann Amerbach maintained good personal contacts with other important humanists such as Johannes Reuchlin , Beatus Rhenanus and Sebastian Brant . These learned friends also worked closely with the Basel printer as proofreaders. It is considered to be a lasting merit of Johann Amerbach to have played a decisive role in establishing the links between humanism and printing, which were extremely fruitful for the intellectual life of Basel in the 15th and 16th centuries. Amerbach found the textual basis for many of his works in the rich manuscript holdings of the Basel Charterhouse. In return he used to give the first copies of his prints to the monastery library.

Amerbach's printing and publishing program was particularly shaped by the values ​​and goals of the humanistic mindset. He printed folio editions of the Latin Bible, scholastic writings, dictionaries and scholarly editions of the works of the Church Fathers (including Augustine and Ambrosius ). In addition, excellent editions of the antique classics came from his shop . Amerbach paid particular attention to the works of modern humanists. So he published u. a. Writings by Petrarch , Enea Silvio Piccolomini , Marsilius Ficinus , Baptista Mantuanus and Franciscus Philelphus . The number of his German-language prints was small.

Johann Amerbach had a rich inventory of different type alphabets . He owned half a dozen Antiqua fonts alone , mainly for printing by the Church Fathers and humanists. Through his printing work, Amerbach has contributed a lot to spreading the Antiqua in the German area.