This article is about Ephraim Chambers' encyclopedia. For further meanings see Cyclopaedia (disambiguation) . 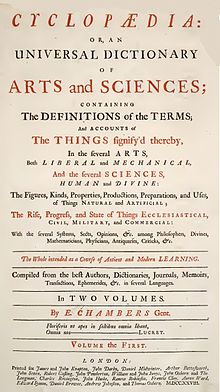 The Cyclopaedia is an encyclopedia by Ephraim Chambers . In 1728 in London he published the two-volume Cyclopædia, or, An universal dictionary of arts and sciences : containing the definitions of the terms, and accounts of the things signify'd thereby, in the several arts, both liberal and mechanical, and the several sciences , human and divine: the figures, kinds, properties, productions, preparations, and uses, of things natural and artificial: the rise, progress, and state of things ecclesiastical, civil, military, and commercial: with the several systems, sects, opinions, & c: among philosophers, divines, mathematicians, physicians, antiquaries, criticks, & c: the whole intended as a course of antient and modern learning .

It is considered the first English-language encyclopedia, and (presumably) the first to use cross-references. Three editions appeared during Chambers' lifetime, and after his death his work was continued: the seventh edition (1753) was accompanied by two supplementary volumes; 1778–85 and 1786 the most extensive edition appeared in five volumes.

Chambers 'work drew on John Harris ' Lexicon technicum from 1704 and was in turn the inspiration for the Encyclopédie ou Dictionnaire raisonné des sciences, des arts et des métiers , which was originally supposed to be just a translation and modest extension of the Cyclopaedia . It was only under Denis Diderot that the well-known independent work was created.