A dot matrix printer is a computer printer which, during the printing process, strikes a number of individually controlled needles on a - mostly black - ink ribbon , thereby bringing the other side of the ink ribbon into printing contact with the paper. A printed character consists of a large number of such color points.

In the 1980s, dot matrix printers were widespread in the home and small office sector ( SOHO ) and were later replaced by inkjet and laser printers , but are still found sporadically (doctor's offices, ticket printers ). Overall, due to their high noise level and low resolution, they are no longer up-to-date, but are still used and also still produced as a niche product (e.g. for copies and delivery notes in the transport and logistics sector).

Between 1952 and 1954 Fritz Karl Preikschat submitted five patents for his invention of a telex with 7 printing pins for a 7x5 dot grid. The device was offered to the Deutsche Bundespost in 1956 by his employer at the time, Telefonbau und Normalzeit GmbH (TuN) , which, however, showed no interest. Before Preikschat emigrated to the USA in 1957, he sold the exploitation rights for all countries except the USA to the TuN.

The dot matrix printer was introduced as a commercial product in 1968 by the Japanese company OKI and called OKI Wiredot . In 2013, OKI received the title of “Technologically Valuable Heritage” from the Information Processing Society of Japan (IPSJ).

A dot matrix printer belongs to the daisy wheel to the impact printers (English impact "impact, impact") because the printing of physical pressure is applied. This means that copies can also be made. Since the print image is composed of a matrix of dots, it counts, like most other printer types, to the matrix printer . 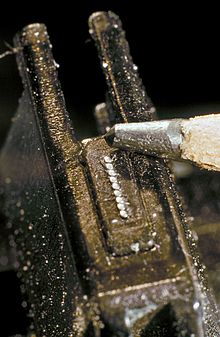 During the printing process , individually controlled needles (7, 8, 9, 12, 18, 24, 36 or 48 pieces) hit a ribbon between the paper and the print head , whereby the pixels that make up the characters are displayed. The higher the number of needles, the closer the dots can be and the better the printed image. With this technology, depending on the type and print quality, you can achieve a printing speed of between 30 and 1550 characters per second (also CPS for characters per second ) for devices with a movable print head, and up to 1000 characters per second for so-called line printers with a fixed print line . However, the higher the number of needles, the lower the quality of the copies. For this reason, nine-wire printers are often used for applications with up to six copies.

The principle of the dot matrix printer

In draft mode (German draft mode ) moving the print head at high speed. The needles are controlled line by line in a coarse matrix. As a result, the typeface can only be read appropriately. A font with a grid of only 8 × 9 dots is often used, even if the printer has 24 or more pins. However, the speed of printing is very high. 200-400 cps are typical. Some models have an additional high-speed draft mode, which is even faster, but also delivers an even worse print result. In many cases, however, the tradeoff between speed and readability is acceptable.

In NLQ mode ( Near Letter Quality , in English almost correspondence quality ) the print head is moved at half speed in order to double the horizontal resolution with the same stop frequency of the needles. At the end of the line there is a line feed of ½ needle diameter and the line is printed again. Thus, the gaps in the print image are now also filled (vertical resolution). A printout takes up to four times more time compared to Draft mode. The bidirectional printing process offers a possible optimization . 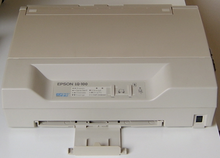 In LQ mode ( Letter Quality ), the print image corresponds to a page produced using traditional methods, in other words "correspondence quality ". This was previously only achieved by typewriters or type wheel printers, whose typeface had also been significantly improved by the use of carbon ribbons in comparison to textile ribbons soaked with ink. Today every commercially available laser printer achieves such a print quality. With a dot matrix printer, this quality is achieved through a very high horizontal resolution as well as very fast and precise control of the needles.

Simply put, the higher the printing speed, the less time is available for a print mark and the lower the print quality.

The first dot matrix printers only worked with eight needles. This meant that letters with descenders (e.g. "g" or "j") could only be printed to a limited extent. The standard character sets from the computer terminals were also used in the printer software. These had an 8 × 8 matrix. Underlined text was also a problem. Real descenders were only possible with the ninth needle. 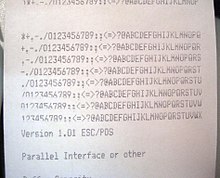 Typeface from a receipt printer (EPSON TM-U210) with original ribbon

Depending on the type, dot matrix printers can print both text and graphics in monochrome and color. In the latter case, the ribbon consists of the colors blue-green ( cyan ), purple ( magenta ), yellow and black ( key plate ) ( CMYK , see also subtractive color mixing ), which are arranged next to each other in tracks on the ribbon . The printer can select the respective color by shifting the ribbon vertically onto the corresponding track. To display a matrix point in a certain color, the needle must be activated one after the other with the respective color ribbon selection at the same point. Mixed colors that differ from the basic colors can only be displayed using a diffusion pattern ( dithering ). Due to the lack of resolution due to the technology and the inadequate repeatability, dot matrix printers with this method do not achieve the color fidelity of an inkjet printer by far.

While printing wheel printers are rarely used, the similarly reliable and robust dot matrix printer is still often found in companies, medical practices, land registries, law firms, notaries' offices, state chancelleries and in banks such as savings banks in the cash register business. Dot matrix printers are also used in ticket validators, department stores and parking machines because they require little maintenance and the printouts are durable. For these areas of application, however, thermal printers are also very often used, because with these devices the consumable ink ribbon is no longer necessary. Furthermore, because of their robustness, dot matrix printers are used in dusty factory halls or on construction sites.

By far the most common area of ​​application is still so-called log printers in large companies or in systems with high security requirements. The individual protocols, e.g. B. of switching states in switchgear are not only digitally secured, but also immune to subsequent changes as an immediate expression.