With thermal printing a number of printing methods based on selective heat exposure is known. Today, the process is mostly used for cash register printers, for parking tickets and travel tickets.

To print, the paper (or another medium) is moved past a thermal printhead or thermal line. This assembly, which consists of a field of small heating resistors, is called a thermal comb by the manufacturers . In particular, simple thermal direct printers that are integrated in medical measuring devices are therefore also referred to as thermal comb printers. A sufficiently small thermal time constant of these heating elements is achieved by a sufficiently high heat dissipation in order to be able to print a paper web with continuous movement with high resolution . The print density is specified here both in dots per inch ( dpi ) and occasionally in dots per millimeter (dpmm).

Usual print densities are 6, 8, 12 or 24 dpmm (corresponding to 150, 200, 300 or 600 dpi), but finer ones exist. The print heads are sensitive to soiling, especially from dust containing metal, the deposits of which can cause a short circuit between the thermal resistors.

As a cash register printer, many thermal and thermal transfer printers are specially prepared for printing barcodes. Most models have implemented a dedicated printer language. As such, ESC / P (print standard from Epson) can be found in almost every printer in cash register systems (other languages ​​are e.g. ZPL from Zebra, Easyplug from Avery Dennison, JScript from cab or TPCL from Toshiba ). The command sets contain special commands for printing barcodes. Therefore these devices are also known as "barcode printers".

There are essentially three printing techniques for thermal printers : 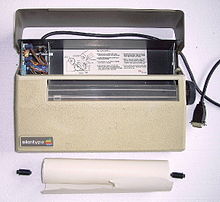 A thermal print head or a thermal strip is used to print directly onto a special thermosensitive paper , which blackens when heated. The printouts are mostly monochrome; Grayscales are usually rasterized because they can only be set to a limited extent through temperature control. If necessary, dichromatic paper with two different colors of different temperature sensitivity can also be used.

The first thermal (direct) printers were used for inexpensive fax machines . The areas of application that are widespread today include printing receipts , receipts, shipping labels, parking tickets, entry and travel tickets , scientific and medical measurement reports , barcode labels , price tags (e.g. on self-service fruit and vegetable scales) and many other types of labels . In the private sector, thermal printers are still used, especially in inexpensive fax machines, but were previously more common as printers for home computers or pocket calculators .

Classic thermal paper is sensitive to light and temperature, among other things. Therefore, tax offices in various countries require permanent copies of thermal print sales receipts. If suitable thermal paper is selected, the printouts are still legible even after many years if stored away from light and heat. Today's paper also shows significantly improved resistance to environmental influences. This is achieved in part by applying a protective layer (top coat), but also by means of improved formulations.

Direct thermal printing has the advantage that it can be used without color-producing consumables such as B. ribbons get by . Since the printer has only a few moving parts, its service life is significantly longer than, for example, B. those of dot matrix printers and inkjet printers . In addition, devices for paper roll use, apart from refilling the paper roll, reliably do without any maintenance. This means that it can also be used outdoors, which is almost vandalism-proof and weatherproof. In addition, very compact designs are possible. In this regard, it was for a long time an alternative to the metal printer , which was not able to establish itself in the long term due to the expensive special paper.

In the thermal copier , the original only needs to be irradiated with a powerful lamp. The dark colored areas heat up more and are shown on the same when they come into direct contact with thermal paper. Some thermal printers are suitable for both direct thermal printing and thermal transfer printing (see below) and can be switched between these two operating modes.

With the patented zinc printing technology , it has also been possible since 2008 with corresponding direct thermal printers to create any color prints (e.g. also color photos) by activating ("coloring") different white crystalline color particles for each basic color by thermal impulses of different temperatures and exposure times .

In thermal transfer printing, a special film coated with temperature-sensitive ink is passed between the paper and a thermal printhead, which has hundreds of computer-controlled heating elements that transfer the print image. If a heating element is activated and its head is heated, the layer of color in the film melts and is transferred to the paper. Their smooth surface ensures an exact color print and achieves a precise print quality. This type of print is easily recognizable by a higher surface gloss than most other printing methods. While direct thermal printing allows for grayscale in poor quality, halftones in transfer printing can generally only be transferred to the paper in a raster pattern, as the color layer can only ever be completely removed from the film.

Since all printouts on the used thermal transfer film remain permanently legible, there is a specific data security risk for security-critical applications in banks, industry and authorities.

With this method, the print medium does not necessarily have to be (normal) paper. Only the film and the temperature have to be adjusted to the medium to be printed, then most solid surfaces can be printed. The main restrictions are the availability of suitable transfer foils.

A thermal transfer printer is often used to print permanent labels, which are applied, for example, to long-lasting goods for part identification with serial numbers and which are intended to survive the entire service life of this part. Thermal transfer printing is also one of the most common printing processes for direct printing on three-dimensional objects. For the automated production process, suitable printers - often as part of industrial robots - are individually configured from standard components (assemblies).

A similar process is dye sublimation printing . The difference is that the dyes applied to the carrier film are evaporated by applying heat. The dye changes directly from the solid to the gaseous state ( sublimation ). The gaseous dye penetrates the material to be printed (in the case of paper) or is deposited on it (in the case of plastic). Depending on the amount of energy supplied to each printing point, the amount of color to be transferred (up to 64 gradations per color) is controlled, whereby a high color resolution is achieved and brilliant colors are created. However, the disadvantages are the slow printing speed, since only one color can be applied at a time per printing process, as well as high costs. In many cases the print image has to be covered with a transparent protective layer in the last pass in order to achieve the necessary durability and abrasion resistance. Since the process is particularly used for printing digital images , the same printing position must be precisely controlled up to four times for each (color) pixel in order to produce the desired color tone with the usual four standard printing colors (cyan, magenta, yellow and black) . Because the four colors are available separately from each other and periodically one after the other on the ink carrier film at exactly the same intervals, the carrier film is usually transported to the next frame with the next color after a single-color printout of a print line (or area - thus defines the color offset) and repeat the process with this until all four are done.

The print results are of the highest quality and very similar to a conventional color print from a negative. In the early days of digital photography, the main areas of application were photo studios, today they are mainly used for private use due to the excellent print quality combined with a compact and inexpensive design and are increasingly giving way to the cheaper inkjet technology. Some devices can be connected directly (via Bluetooth or infrared interface) to digital cameras and used as a mobile printing solution on the go.

Similar to typewriter carbon ribbons or carbon paper , color separation negatives of the printouts remain on the thin transfer foils . This is a problem for data security , because the used foils cannot be made illegible by conventional document shredders.

Due to the heating and cooling of the heating elements, the (edge) sharpness in the printing direction is less than in the transverse direction. When printing barcodes in particular , the manufacturers therefore recommend that you always arrange them so that the bars are output along the direction of printing. However, there is a risk that with one or more defective heating elements, white lines (flaws) appear parallel to the direction of the barcode lines, which in turn impair the barcode.

Direct thermal printers can only print black and white on conventional thermal paper; On paper preconfigured with “color zones”, however, monochrome prints in several colors are also possible, one color per color zone. It is suitable for pre-structured printouts such as B. Labels.

Thermal transfer printers can use several thermal transfer foils and thus print in multiple colors, but are limited to one color per printing process. Two-color printing is possible using either a synchronized printer or a printer with two printing units.