Ribbon spools in an old typewriter 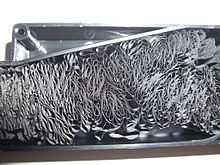 The ribbon is a carrier of printing ink. It is mainly used in typewriters , impact printers and calculating machines with a printing mechanism. Today, ribbons are a niche product for these devices, which have now largely been replaced by PC systems with other printing technology (e.g. inkjet and laser printers).

The first typewriter with a ribbon was designed by the Italian Giuseppe Ravizza from Novara in 1855 . After that, other manufacturers such as Remington or, in 1878, the Danish designer Malling-Hansen equipped their machines with color ribbons. B. Malling-Hansen's first models of the "writing ball" made the writing visible with carbon paper .

Ribbons are usually mounted open between two individual spools or in a cassette unit. When the assembly is open, only a single reel filled with a new ribbon is bought and the beginning of the new ribbon is hooked into the remaining empty reel. Then the ribbon is to be threaded correctly and carefully into the mechanical guide profiles. An automatic change of direction is activated at the end of the ribbon and the ribbon runs in the opposite direction. There are only a few spool sizes, so that almost all machines with consumables are supported. Ribbon cassettes are used on machines of more modern design . They already contain the required bobbins and can be changed as a unit without manual threading. Textile tapes usually run in an endless loop without spools. Cassettes are available in a wide variety of formats. For this reason, not all model series are supported in this shrinking market, and the bands for older models are only available in one color, if at all. While compact cassettes are usually used in typewriters, which are carried along with the printing unit and spooled character by character, for some calculating machines or dot matrix printers they are available in a longer design for a full line length and are spooled together with the return of the printing unit. As a special form, high-performance line printers in the EDP ​​are covered with colored or printing blankets up to 420 mm wide, depending on the number of possible stop positions .

The standard form of the color ribbon is a single color soaked textile fabric tape. Today it is mostly made of nylon , previously made of silk and cotton . The impregnation is set so that touching the paper without pressure does not lead to coloring. It is only when a type hits the raised areas that the dye contained in the fabric is released through pressure. So that the types do not take on any color themselves, they are often chrome-plated. The transfer onto the paper removes the dye locally, but the capillary action makes up for this local lack of color within a very short time. For the usual office typewriters, ribbons with a width of 13 mm (corresponding to half an inch) and a length of around six meters were mostly used. Cassette tapes are narrower because of the more precise mechanics, their length depends on the design of the cassette.

In order to emphasize or to express negative numerical values ​​in red, ribbons with a half black over a red impregnation are used. At the dividing line between the colors, the capillary effect is prevented by a weld in the fabric. In order for dot matrix printers to be able to produce prints with colored graphics, there were even ribbons with the four standard printing colors black, cyan, magenta and yellow on top of each other. When mechanical typewriters were still in use, fabric tapes came in different colors: black, black-red, green-red, blue, brown, purple, green, and possibly black-green. Purple ribbons were also used in the early years of the typewriter. Often, however, only black and black-red ribbons were used, which are now the closest to being available.

When correction aids for carbon tapes were already available on the market, correction options were also developed for tissue tapes. They cover false characters with an opaque white color. In the case of color ribbons with correction strips, half of the fabric tape was replaced by a colorless fabric with a layer of correction white. This color strip has an additional film that protects the types. There are also correction sheets with a similar opaque color that are held manually over the paper before the wrong type is repeated.

The imprint through a soaked fabric tape can never reach the quality of letterpress printing . The structure of the tissue can always be seen. So-called carbon ribbons remedy this deficiency. Carbon ribbons are very thin strips of plastic film coated with paint and a binding agent. The color coating is particularly fine-grained, comparable to a soot coating. Originally the paint consisted of fine carbon, today mostly synthetic resin-containing material mixtures are used without additional binding agents. In both cases the paint layer is very sensitive. External influences can easily smudge or partially peel off the paint. As a result, it is usually not document-proof . In addition to these single-coated tapes, there were multi-coated so-called multicarbon tapes. However, the best impression is obtained with just a single layer of coating. In addition to the cartridges for ball-head typewriters and type wheel typewriters, there were carbon ribbons on 13 mm ribbon spools. Different colors were also available for the carbon ribbons. Today only black carbon ribbons are usually available as consumables.

Simply coated carbon ribbons, which are not document-proof, enable an almost perfect correction of typing errors. These special ribbons are called carbon-C ribbons. The C stands for correctable . With a new type stop on the wrong character, a slightly sticky correction tape specially tailored to the color coating removes or lifts the color pigments of the wrong character from the paper (so-called lift-off correction). This correction is triggered by a delete key on the keyboard.

The carbon tapes, which were only coated in a single layer, represented an information security risk that hindered their universal use. Due to the lack of color coating in places after printing, the written documents can be reconstructed with a used carbon ribbon, albeit without spaces or formatting. In addition, the lift-off correction could theoretically change the text on documents afterwards without it becoming visible. For this reason, correctable carbon ribbons (C) must not be used in institutions with increased security requirements (e.g. banks, law firms, authorities). For this purpose, there was a bank lock that could be retrofitted for many machines , which prevented the insertion of an ink ribbon cassette with a correctable ink ribbon via a mechanical coding in the cassette. You can recognize these non- document- proof ribbon cassettes by the yellow knurled wheel with which you can transport the carbon ribbon by hand. However, there were also document-proof carbon ribbons . With these cartridges, in contrast to the correctable carbon-C ribbon cartridges, the ink penetrates into the paper and cannot, as described above, be removed from the paper with the "Lift off" adhesive tape (yellow core). Document-proof carbon tapes can only be corrected with a correction tape with a blue core. To recognize which cassettes go with which correction method, the multicarbon tapes also have a blue transport wheel. This correction method is called: "Cover up". The corrected point can be clearly seen here because, unlike the lift-off method described above, the character to be corrected is only covered with white paint, similar to the correction with the " Tipp-Ex " correction paper . This type of correction is also used for fabric color ribbons. Compared to the fabric color ribbons, a razor-sharp typeface can be achieved with a document-proof carbon ribbon. Even multi-carbon tapes (blue knurled wheel) cannot be corrected with lift-off correction tapes and are therefore considered document-proof, like fabric tapes.