Véhicule automatique léger ( VAL , German: "light automatic vehicle") is a particularly light-weight, driverless, lane-guided public transport system that can be used as a people mover e.g. B. is used in airports and as a rapid transit system. Originally developed by Matra , VAL is now a product from Siemens Mobility . 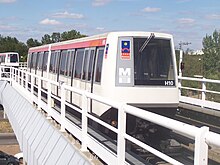 Val 206 of the Toulouse metro on line A. 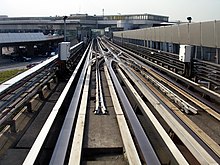 Guide rails take over the lateral guidance in a switch - here OrlyVAL.

Route at the final stop Terminal 1 of the CDGval 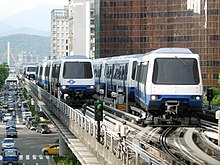 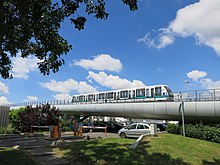 The system is based on an invention by Professor Robert Gabillard ( Université Lille Nord de France ) and was developed by Matra Transport in the early 1980s . Matra's traffic engineering department has been part of Siemens Transportation Systems since 2001 .

The VAL system was first used in 1983 at the then newly built Métro Lille . It is particularly suitable for medium-sized cities because of its lower cost. The acronym originally meant Villeneuve-d'Ascq à Lille (German: " Villeneuve-d'Ascq to Lille ") and referred to the two endpoints of the first route. Only later did it become véhicule automatique léger .

As with some other driverless passenger transport systems, the platforms in the VAL system are separated from the tracks by transparent glass walls with embedded platform screen doors. This is to prevent accidents caused by people or objects falling on the road and suicides . The platform screen doors open and close at the same time as the vehicle doors to switch passengers after a train has entered the station.

The automatic line 14 of Métro Paris and the fully automatic line D of Métro Lyon , on the other hand, are not VAL systems, and neither is the Lausanne Metro, which opened in 2008 .

Since 2004, Siemens has been developing the successor to the Val together with the French Lohr Group in the Neoval project. As with the Translohr system developed by Lohr, the trains in the Neoval system are continuously guided by a central rail with a hexagonal rail head cross-section and do not require any electrical supply between the stations . The side guide rails and the associated horizontal guide wheels are omitted. The aim is to reduce the costs for the infrastructure, since no additional power rails or overhead lines are required. The system will also be able to recover and use the braking energy through a regenerative braking system . Since March 2009, the Airval, the first Neoval pre-series vehicle, has been tested on the Lohr test track in Strasbourg. 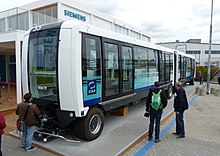 The Cityval system is based on the Neoval project. Line B of Métro Rennes will be the first use of this system. 19 two-part Cityval trains have been ordered for this line, which is scheduled to go into operation at the end of 2018.

On June 8, 2009, Siemens presented the Airval system at the UITP World Congress in Vienna. Airval is also based on the Neoval project and is the variant for use at airports as a people mover .

In December 2017, Siemens announced the order for an Airval system to connect the terminals at Suvarnabhumi Airport in Bangkok.

At Frankfurt Airport , a 5.6-kilometer Airval route will connect the new Terminal 3 with the existing terminals from 2023. The trains should run every 2 minutes and the travel time between Terminal 1 and 3 should be 8 minutes.

The designations for the vehicle types Val 206, Val 208 and Val 256 are derived from their width.

In Aachen the project was under Campus train investigated the use of the system Cityval. The steering committee spoke out in favor of it in early 2011. In a referendum initiated by the citizens' initiative “Campusbahn = megalomania” in March 2013, around 66% of the people taking part in the vote decided against the Campusbahn.