The airport complex, which currently has a total of eight runways, houses four large passenger terminals with 191 gates for national and international arrivals and departures. Terminals one to three are used for domestic flights, while terminal five is used for international air traffic. Terminal Four no longer exists after the old international departure lounge was converted into a Chicago city bus transportation hub. The Chicago Elevated Blue Line links the airport to the Chicago Transit Authority's local public transport system.

The airport is named after Edward O'Hare , who served as a pilot during World War II . Next to it there is another airport in Chicago , the Chicago-Midway Airport . A small airfield built on Lake Michigan, Merrill C. Meigs Field Airport , was demolished in 2003.

Chicago O'Hare International Airport is located 25 kilometers northwest of downtown Chicago . The airport is mostly in the area of ​​the city of Chicago, smaller parts are in the area of ​​the places Bensenville , Des Plaines and Schiller Park . In addition, a large part of the airport area is in Cook County , a small part is in DuPage County .

Chicago O'Hare International Airport is integrated into local public transport by the Chicago Elevated Blue Line, METRA North Central Service and two bus routes . The Chicago Elevated Blue Line only stops at the western terminal complex. The trains of the Metra North Central Service do not stop directly at the terminals, but at three train stations at the airport. The northern train station, the O'Hare Transfer Station , is located next to the O'Hare Multi-Modal Facility , which is connected to the terminals via the People Mover Airport Transit System . In addition, routes 250 and 330 of the bus operator Pace stop at car park E.

The airport was originally built during the 1942-1943 war as a works airfield for the Douglas Aircraft Company , which manufactured C-54 Skymaster machines here . The contract with Douglas expired in 1945 and plans to build civil aircraft here came to nothing. After the plant was closed, the airport was renamed Orchard Place Airport and formed the basis for the IATA code ORD, which is still valid today . In 1949, in honor of the naval aviator Lt. Cmdr. Edward "Butch" O'Hare changed the name to the name that is still valid today.

In the early 1950s, Chicago-Midway Airport, Chicago 's main airport since 1931, became too busy; Midway was not suitable for the emerging first generation jet planes. The city of Chicago and the United States Federal Aviation Administration set out to develop O'Hare as the future city airport. The first scheduled flights started in 1955, a terminal for international flights was built in 1958, but it wasn't until the expansion in 1962 that domestic air traffic shifted from Midway here. With around ten million air passengers annually, Chicago-O'Hare Airport suddenly became the busiest airport in the world and doubled the number of passengers in the two years that followed. In 2005 O'Hare counted around 76 million passengers. The new 09L / 27R runway was opened in November 2008. All slopes are equipped with CAT IIIb equipment .

In 2003, with the closure of runway 18/36, a major renovation began, which was originally supposed to be completed by the end of 2015 and the cost of which amounts to 8.2 billion US dollars. The runway system is to be changed in order to handle even more passengers. This had become necessary because the previous configuration had led to an intersection with another at each runway. In contrast, the new configuration is almost free of crossings. Three runways are to be demolished, four new ones built and two extended. In addition, the terminal configuration should change. This is intended to increase the possible flight movements from 2700 daily in 2011 to 3800 per day. The runway 9L / 27R was renamed to 9R / 27L in 2007.

The further conversion concerns the closure of runway 14L / 32R and the construction of the last planned further runway directly north parallel to 9R / 27L, as well as the reconfiguration of the terminals.

Chicago O'Hare International Airport has a total of seven runways , five of which run parallel to each other in an east-west orientation, the remaining two run in a parallel northeast-southwest orientation. All runways except runway 04L have instrument landing systems (ILS). Another runway is under construction, while three runways have been closed.

Map of the two airports in Chicago

Chicago O'Hare Airport has four passenger terminals with a total of 191 gates . Two or more terminals are possible on the west side of the airport when the runway expansion is complete. They serve the following airlines in the following configuration:

Terminal 1 - connecting tunnel for transit passengers in passenger areas B and C.

The original passenger terminal, which was built in 1955, was replaced in 1987 by the new Terminal 1, which was designed by Helmut Jahn . The terminal consists of two buildings (Concourse B and C) which are connected by a tunnel. Terminal 1 has 50 gates at two concourses:

Terminal 2 originally opened on January 17, 1962. It is to be replaced by a new terminal in the future.

Terminal 2 is primarily used for Delta and United Express flights. The latter airline operates from Terminal 2, but check-ins for these flights are carried out from Terminal 1. Terminal 2 has 41 gates at two concourses:

Terminal 3 originally opened on January 17, 1962. In 1984 it was expanded to include Concourse L, which was then used by Delta Air Lines . On May 10, 1990, American Airlines completed a renovation of the terminal. In 2018 American Airlines opened a building with five additional gates. It is located north of Concourse L and is known as the L-Stinger.

Terminal 3 serves as a hub for American Airlines and (for departures) also for other airlines within the Oneworld Alliance . In addition, domestic flights from non-affiliated low-cost airlines are handled in Terminal 3. Terminal 3 has 79 gates, spread over four concourses:

All international flights (with the exception of flights from pre-handling locations ) arrive in Terminal 5. In addition, a number of non-US companies and some low-cost airlines fly from Terminal 5. Terminal 5 has 20 gates and a concourse ( Concourse M ).

The old Terminal 1 was originally opened on October 29, 1955 as the airport's first passenger terminal. At last it consisted of three concourses with the designations A to C. It was demolished in the mid-1980s and the new Terminal 1 was built in its place.

The freight terminals are spread over a north-eastern apron and three aprons between the runways 10C / 28C and 10R / 28L in the south of the airport. 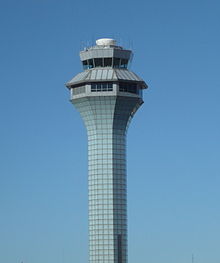 A control tower between the airport hotel and Terminal 2 was put into operation on May 4, 1971. At the time, it was the tallest control tower in the United States at 61 meters . In 1993 it was replaced by a new control tower.

Chicago O'Hare International Airport serves as a hub for American Airlines and United Airlines . In total, it is used by 46 passenger airlines. In addition, 30 airlines transport air freight .

In March 2019, non-stop flights were offered to 166 national and 62 international destinations. The following destinations are served non-stop in German-speaking countries:

Airports in the US state of Illinois