This article or section needs revision: This article is too imprecise. Detailed justification (s) on the discussion page. GWzffW ( discussion )
Please help to improve it , and then remove this flag.

The Ordnungsamt (often abbreviated as OA ) is the name for an organizational unit within local government in Germany and Austria , in which the task of averting threats to public safety or order is usually performed, unless these are assigned to special authorities by state law. A distinction must be made between the designations of the actual authority and the visible enforcement service, which do not have to appear under the same designation.

Situation in Germany and Austria

The regulatory office as an authority

Vehicle of the public order office in Bielefeld

In a broader sense, you can also

be assigned to the regulatory office to deal with.

According to the model administrative structure plan of the KGSt ( communal community center for administrative management ), it is assigned to the legal, security and regulatory administration area with order number 32.

The public order office as an enforcement service 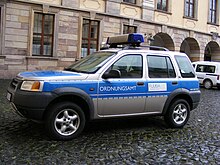 Vehicle of the regulatory office in Fulda

The structure of the municipal security services is very different. The powers are - at least in North Rhine-Westphalia (NRW) and in Baden-Württemberg - very far-reaching, but are sometimes exercised differently in the individual cities and municipalities. In many municipalities there is also close cooperation with the respective state police (double patrol, joint guard).

At the annual federal congress on communal order, the basic developments in this area (increase in tasks, armament, professionalization) are discussed.

There are no uniform standards in training, equipment, armament, performance of duties and uniforms, but there have been attempts in this direction. Since 2014 there has been a state-wide training for the KOD in Baden-Württemberg, which corresponds in the training content to the middle police enforcement service. The KOD training is divided into 5 training units (basic training, internship I, advanced course, internship II and a final course). Among other things, general and special police law , Owi law, criminal procedure law , criminal law , administrative law, road traffic law , political science, psychology , service law , gun law , operational training / access training, etc. both in theory and practice (SHT) are taught here. At the end of this training there is a corresponding written and practical exam.

The establishment of municipal security services can be seen as part of the current restructuring of the German police force. This reverses the unification efforts of the 1970s in police law, which have led to largely uniform police laws and police uniforms as well as to the de-municipalization of the police. Ultimately, this development may end with the restoration of the municipal police force in Germany.

The KOD of the cities and districts takes on the tasks in the context of public safety and order that the police of the federal states have previously performed on a subsidiary (subordinate) basis. This is the predominant part of the administrative offenses, such as B. disturbances of the peace, nuisance of the general public, which falls within the competence of the cities and counties. They are authorized to enforce their lawful measures with coercion, ie under certain circumstances also with force against persons. The regulatory authorities act in conjunction with the police act applies here, at least this applies to the state of North Rhine-Westphalia.

The situation in the countries

Police car of the KOD Mannheim

In the meantime, the municipal enforcement officers in various cities wear shoulder straps with white stars. The background to this is that they have completed training (municipal security service).

In North Rhine-Westphalia , municipal security services have been set up since the late 1990s, primarily in the larger cities of the state, as a reaction of the cities and municipalities to increasing security problems in the urban environment (open drug scene, neglect tendencies, street crime, insufficient city cleanliness) and at the same time dwindling presence of the state police can be assessed.

Service badge of the Graz Ordnungswache

In Austria public order offices are set up under this name, both as an authority and as an enforcement service, in only a few cities. As a municipal authority, the area of ​​responsibility is often divided into several departments, depending on the municipality . As an enforcement service, many cities prefer to set up city ​​police that also enforce city ordinances. These city police are on an equal footing with the federal police in the respective municipality and are armed.

Cities with a state police department as the security authority of first instance are not allowed to set up city police according to the provisions of the Austrian constitution . These are all state capitals except Bregenz and a few other larger cities that are forced to set up authorities with limited powers. The officers act as public inspection and may organ penal orders exhibit and displays. These are the following field service enforcement services:

In Linz the Ordnungsamt was not set up by the city administration, but as a GmbH and is called Ordnungsdienst ( Ordnungsdienst der Stadt Linz GmbH ). The 30 employees (as of 2019) are uniformed and some are armed with pepper sprays.

In Vienna , several security services were set up according to the responsibilities of the various municipal departments:

During Corona - pandemic in 2020, the officials of the PÜG were by the Federal Police temporarily to monitor the Federal Gardens In Vienna.

As a special feature, as it can neither be classified as a municipal police nor as a security service, the Rathauswache has existed in Vienna since 1927 as a special organizational unit of the Vienna professional fire brigade , which was founded as an armed task force as a result of the Palace of Justice fire . In addition to fire protection tasks, the town hall guard is responsible for protecting people and property in the town hall and in all of the municipal offices in Vienna. Another area of ​​responsibility is the issuing of “emergency passports”, i.e. passports that are urgently needed outside of the opening times of the passport offices.

In Great Britain the officials of the public order offices are called Warden (English for "overseer"). They enforce all regulations not to be implemented by the police.

In Poland , the Straż miejska (Polish for "city watch") takes care of public order. Their tasks include identity checks, prosecution of administrative offenses, writing parking tickets, towing wrongly parked vehicles and other offenses that do not directly require the use of the police. However, this can be called in by the city guard at any time.

rest of the world

The establishment of authorities to enforce local regulations is widespread in the member states of the Commonwealth of Nations such as Australia , Canada and New Zealand due to the British legal and administrative tradition. Similar to Germany, these are law enforcement authorities of a municipality, a district or a regional district, which are tasked with the enforcement of non-criminal ordinances, rules, laws, statutes or regulations issued by local governments.

The legal structure of the establishment of the regulatory authorities is incumbent on the provinces in Canada. A distinction must be made here between "normal" community officials and the (community) peace officer (English for "(community) law enforcement officers "), since only the sworn in "peace officer" may act in a sovereign manner.

In the United States , the term Code Enforcement Officer is common, but the responsibilities are much more limited than in Canada, for example, and more like the position of a clerk.

In 2002, a "Municipal Administration and Law Enforcement Office" was opened in every city in China , usually shortened to Chengguan (Chinese: 城管; pinyin: Chéngguǎn). This regulatory office is responsible for enforcing the city's ordinances. This includes the appearance of the city, the environment, sanitary facilities, occupational safety, control of pollution and pollution, health supervision and includes the enforcement of municipal regulations in industry and trade, environmental protection and water.