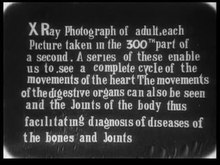 (Medical) radiology , also called radiation medicine in the narrower sense , is the branch of medicine that deals with the application of electromagnetic radiation and (with the inclusion of ultrasound diagnostics , for example) mechanical waves for diagnostic , therapeutic and scientific purposes.

In the early days of radiology, only X-rays were used and the doctrine of the application of X-rays was called radiology or radiology . In addition to X-rays, other ionizing radiation such as gamma radiation or electrons are also used. Since imaging is an essential application , other imaging methods such as sonography and magnetic resonance tomography (magnetic resonance tomography) are also counted as radiology, although these methods do not use ionizing radiation.

For diagnostic radiology include areas as part of the Neuroradiology and Pediatric Radiology. There are other areas of focus such as interventional radiology. Questions of radiation protection and the effects of radiation exposure on the human body are also of importance for the medical profession .

The imaging processes in diagnostic radiology, which has been used since 1895, include projection radiography and cross- sectional imaging processes : X-ray computed tomography , sonography and magnetic resonance tomography . In all of these processes, substances can be used that facilitate the representation or delimitation of certain structures or provide information about the function of a system. These substances are called contrast media . The selection of the procedure and the decision to use contrast media are based on the clinical question and a risk-benefit assessment. The annual costs of radiation diagnostics in Germany rose from around 4 billion euros in 1992 to more than 7 billion euros in 2008.

In radiographic processes (also known as "conventional X-rays"), areas of the patient's body are irradiated with X-rays from one direction. On the opposite side, the radiation is registered with suitable materials and converted into an image. This shows the tissue lying in the beam path in the projection: bones absorb more radiation than soft parts and therefore cast shadows; Air-filled tissues such as the lungs are relatively permeable, so that a higher radiation intensity is registered behind them. Since various structures usually overlap in the beam path, it is often helpful to produce several images from different projection directions.

The type of sensor material used for registration depends on the device and recording type. In conventional radiography, sensitive film material analogous to photography is used, which blackens when exposed to radiation and has to be chemically developed. The semi-transparent prints can then be viewed on a light box . Further developments of this principle allow digital readout of a detector instead of the development of film material. The simplest principle is a fluorescent plate , which is scanned in after the exposure. X-ray image intensifiers are traditionally used as sensors in order to assess moving images in real time ( fluoroscopy ) . In modern devices, CCDs are used as detectors for the direct digital acquisition of both still images and real-time moving images . Radiological recordings can be saved in digital form in DICOM format.

X-ray of the chest, the left lung has been removed and the cavity is completely filled with secretions 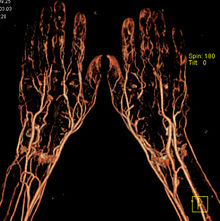 CT angiography of the hands in a 3D reconstruction

The most important examinations are listed below:

CT of a kidney tumor on the right kidney ("x" mark, left in the picture)

See sonography , the most frequently used imaging method in medicine, advantages: gentle, repeatable, real-time assessment, sometimes functional assessment; Disadvantage: not all tissues and areas are accessible, unsuitable for very obese patients. The examination is paid too badly, so that fewer and fewer doctors are familiar with it and more and more CT and MRI examinations are used. Smallest gas bubbles (microbubbles) are used as contrast media , which facilitate the structure and function representation of vessels and the liver, as well as water and gas-absorbing substances to improve the representation of the upper abdominal organs.

In order to acquire the title of specialist in radiology after completing a medical degree in Germany , a five-year training period is required. The following are eligible for further training: 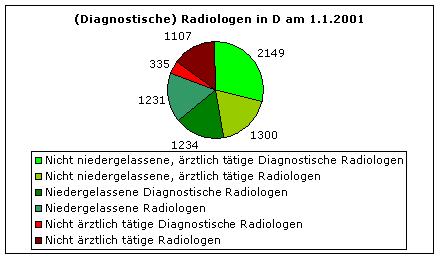 The content of further training to become a specialist is defined by the relevant medical associations: Proof of a certain number of independently carried out examinations in children, adults and in neuroradiology is required for admission to the specialist examination.

In Austria, a radiology technologist is a specialist in the application of imaging processes in medicine (x-ray, sectional imaging, nuclear medicine) and for the implementation of therapeutic treatments with ionizing radiation (radiation therapy). He carries out examinations and therapies on his own responsibility as directed by a doctor, is not subject to technical instructions, is authorized to use contrast media (in cooperation with doctors) and can set up a freelance work.

In Germany, a corresponding course of study will be offered from September 2014 at the Haus der Technik in Essen .

In Germany, radiology technologists are equivalent to medical-technical radiology assistants (MTRA). You will carry out examinations using conventional or digital radiology (e.g. CT, MRT) independently and assist with examinations such as fluoroscopy and digital subtraction angiography.

Radiographers in nuclear medicine work in the radionuclide laboratory and carry out examinations such as scintigrams, SPECT and PET. Radiotherapy technicians also participate in radiation therapy, help with radiation planning and carry out the individual therapy fractions independently. In radiation therapy, they are therapists and the intermediary between patient and doctor. Therefore, the special medical and caring moment plays a major role in this area. In X-ray diagnostics and nuclear medicine, the patient often appears only once without being noticed during the operational process. Activities in nuclear medicine and radiology tend to be more technical. The radiotherapy technicians in radiation therapy, on the other hand, accompany the tumor patient for several weeks, sometimes even for months. Therefore, they have to deal with the patient more comprehensively: with his illness, his general condition, but also with his character and his physical and mental situation. The training takes place in Germany at vocational schools or training centers. It requires a secondary school diploma and lasts three years.

At the moment, a change in training at university level is also being discussed in Germany, or a start is being made on offering the option of further academic training to MTRAs who have already completed their training with the part-time course in Medical Radiological Technology.

In Switzerland, the training is offered at higher technical schools and also lasts three years.

The Interventional Radiology comprises minimally invasive therapeutic measures to be carried out under permanent control means of imaging methods: for example, the distention of vasoconstriction ( angioplasty ) under fluoroscopic control (angiography). When using a vascular prosthesis (stent), this method is known as stent angioplasty . Further interventional radiology measures include: a .: tumor embolizations (~ sclerosing), the treatment of acute bleeding, elimination of duct stenosis in the gastrointestinal tract or in the biliary tract, tissue removal and the treatment of vascular dilatations (aneurysms) Interventional radiology is systematically not part of diagnostic radiology, but historically evolved from it and is mostly carried out by radiologists.

Since the radiation doses used in X-ray diagnostics are very low, but potentially harmful for the patient and the user, special emphasis is placed on radiation protection in radiology . The German Society for Medical Radiation Protection is an association of doctors and other competent persons who have set themselves the goal of exploring and minimizing these radiation risks in medicine.

With around 1.3 x-rays per inhabitant per year, Germany takes a top position. The medical application of ionizing radiation leads to an additional radiation exposure of roughly 2  mSv / a per inhabitant. Theoretically 1.5% of the annual cancer cases can be traced back to this.

Computed tomography has by far the largest share of medical radiation exposure .

A basic guideline for minimizing radiation exposure when using radiological methods is published by the working group "Orientierungshilfe Radiologie", the Federal Radiology Group of the Austrian Medical Association and the Austrian Radiological Society , as a non-binding reference work both in paper form and online. The German Radiation Protection Commission also offers such guidance.