The Federal Office for Radiation Protection ( BfS for short ) is an organizationally independent German higher federal authority within the portfolio of the Federal Ministry for the Environment, Nature Conservation and Nuclear Safety . The main tasks include the safety and protection of people and the environment from damage caused by ionizing and non-ionizing radiation. The office was founded on November 1st, 1989 and is based in Salzgitter ; Branch offices are located in Berlin , Bonn , Freiburg im Breisgau , Neuherberg near Munich and Rendsburg . The BfS has a total of around 660 employees. 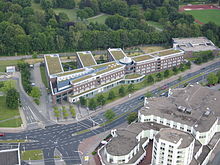 The BfS was founded against the background of the Chernobyl nuclear disaster in April 1986 and the so-called transnuclear scandal in 1987 with the aim of re-bundling competencies and responsibilities in the field of radiation protection. The following organizational units were incorporated into the BfS:

With reunification , parts of the State Office for Nuclear Safety and Radiation Protection of the former GDR were added after a short time .

In 1990 the BfS took over the management of the repository for radioactive waste of the former GDR in Morsleben . In the years that followed, it expanded the local dose rate (ODL) measuring network to monitor environmental radioactivity.

"Yellow cabin" in front of the BfS in Salzgitter-Lebenstedt

Between 2001 and 2003, the BfS issued the first permits for the construction of decentralized interim storage facilities for spent nuclear fuels at the locations of the German nuclear power plants. In 2009 the BfS was assigned the operation and immediate closure of the Asse mine . After a comparison of options, it was decided to recover the waste from the mine.

The new start in the search for a repository for high-level radioactive waste also resulted in a restructuring of the authorities involved in 2016: Tasks in the area of ​​disposal, storage and transport of radioactive waste and nuclear safety, for which the BfS was responsible, were on the one hand transferred to the Federal Office for the Safety of Nuclear Waste Management (BASE), and to the Federal Association for Final Storage (BGE). Among other things, BASE has taken on the task of keeping statistics on reportable events from the BfS . With the reorganization, the competencies of the BfS are concentrated on the state tasks of radiation protection, for example in the area of ​​nuclear emergency protection, medical research, mobile communications, UV protection or the measurement networks for radioactivity in the environment.

The office is subordinate to the Federal Ministry for the Environment, Nature Conservation and Nuclear Safety (BMU). The BfS is headed by a president. If she is absent, she is represented by a vice-president. After the handover in April 2017, nutritionist Inge Paulini is President of the BfS. Your deputy is the physicist Florian Rauser .

The BfS is divided into the Presidential Area (PB), which reports directly to the President, the Central Department (Z) and the following specialist departments:

BfS measuring station on the Schauinsland

The central task of the Federal Office for Radiation Protection is to protect people and the environment from the harmful effects of radiation and to provide information about possible radiation protection-related risks: This includes applications in medicine, radiation exposure in everyday life, for example from UV and mobile phone radiation, as well as the naturally occurring radioactive noble gas Radon , but also the protection of the population in a radiological emergency. For this purpose, the BfS operates a measuring network for measuring environmental radioactivity with a total of 1,800 measuring points. The measuring station on the Schauinsland is the only German one that also carries out a trace analysis of radioactive substances in the atmosphere in order to monitor the nuclear test ban treaty . The expansion of the power grids also brings with it numerous questions in the area of ​​radiation protection.

With the Radiation Protection Act , which was passed on June 27, 2017, the BfS has been given new tasks, for example in assessing new medical procedures or in emergency protection . The BfS plays a central role here. The law implements EU Directive 2013/59 / EURATOM into national law.

In the area of specific nuclear security (NGA) advises and supports the BfS as part of the mutual assistance by the competent authorities of the police and civil protection in the event that radioactive materials were discovered. The “Working Group on Nuclear Hazard Defense” (AG-NGA) is part of the Federal Central Support Group (ZUB).

Another important task of the BfS is research in the areas of radiation protection and radiation protection precaution. The BfS provides the Federal Ministry for the Environment, Nature Conservation and Nuclear Safety (BMU) with technical and scientific support in these areas.