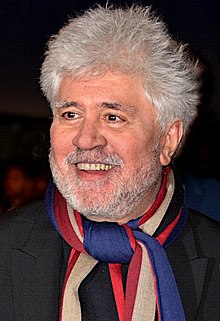 Almodóvar is considered to be the most internationally known Spanish director of contemporary cinema. His tragic comedy Everything About My Mother won an Oscar and a Golden Globe for best foreign language film in 2000.

Pedro Almodóvar was born in a small Spanish town in the province of Ciudad Real, part of the La Mancha region . When he was eight years old, his family moved to Extremadura . There he attended elementary school with the Salesians and secondary school with the Franciscans . The bad experiences with his religious upbringing made him lose faith in God. At that time, he became interested in film art to interest and regular cinema in the provincial capital Cáceres to visit.

At the age of 16, he moved to Madrid with no family and no money , where he got by with odd jobs. He was a short film maker, comic book writer, editor of photo novels, actor and musician before he accepted a position as an employee at Telefónica in 1969 . The simple work there allowed him to write stories and make his first serious cinematic attempts. During these years he wrote a serial column for the Spanish magazine La Luna about the experiences of Patty Diphusa, his literary alter ego.

Almodóvar began his film career as an underground artist of the Movida madrileña , which after the end of the Franco dictatorship wanted to experience everything shrill, exalted and hedonistic . With his first feature film Pepi, Luci, Bom and the rest of the gang (Pepi, Luci, Bom y otras chicas del montón) he became an important figure in the Madrid Movida and known beyond the borders of Spain.

Together with his brother Agustín Almodóvar he founded the film company El Deseo in 1985 , with which all Almodóvar films have been produced since The Law of Desire to this day. In addition to his own films, he also produces the works of other filmmakers with El Deseo , such as B. Lucrecia Martel , Álex de la Iglesia and Isabel Coixet . In April 2016 it became known that the Almódovar brothers were named in the Panama Papers in connection with possible tax and money laundering offenses .

In Germany, Almodóvar made his breakthrough with his Madrid city comedy Women on the Edge of a Nervous Breakdown. Except for the first film, Pepi, Luci, Bom , all films have now been dubbed into German. Overall, the German-language dubbed versions are characterized by a high degree of fidelity to the original, both in terms of the sound of the voices and in the dialogue books, which may also be related to the fact that the director has the last word in the casting and text.

From the beginning, Almodóvar's openly lived homosexuality was a thematic focus in his films. This soon made him a symbol of the lesbian and gay movement internationally . Arnaldo Gancedo, President of the Spanish Association of Gays, Lesbians and Transsexuals, criticized Almodóvar's longstanding reluctance to talk to the press about his private life and sexual orientation. The director "never supported us or any other gay movement," Gancedo said in 2005.

In an open letter to Russian President Vladimir Putin in 2014, Almodóvar and other members of the European Film Academy pleaded for the release of the imprisoned Ukrainian filmmaker Oleh Sentsov .

In 2017 he was selected as the jury president of the 70th Cannes International Film Festival .

Commenting on his upbringing in the monastery, Pedro Almodóvar remarked:

“At that time I was completely against religious education. I knew from the start that the priests had nothing to say to me. In 'The Cat on a Hot Tin Roof,' a Richard Brooks film that epitomized sin for the Church and based on the work of Tennessee Williams, I recognized myself completely and I said to myself: To this world of sin and I also belong to the degeneracy. "

“Pedro Almodovar doesn't just make movies. Almodovar is the movies. He revels in everything forbidden and forgiving that can transform life into art. "

“ Pedro Almodóvar doesn't just make films. Almodóvar is the cinema. He indulges in everything forbidden and forgiving that can turn life into art. "

Almodóvar counts the Nobel Prize laureate Alice Munro among the authors of short stories he admires most. Munro's collection of Heaven and Hell (originally: Hateship, Friendship, Courtship, Loveship, Marriage , 2001) is the background inspiration for his film Broken Hugs (2011). The protagonist of his film The Skin I Live In (2011) reads Tricks in Munro's book of stories (in the original: Runaway , 2004). The film Julieta (2016) is loosely based on the three short stories Decision (Chance) , Soon (Soon) and Silence (Silence) from Tricks.