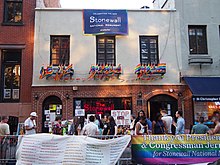 The "Stonewall Inn" in New York, decorated with rainbow flags in the summer of 2016

The lesbian and gay movement is a social movement whose emergence was catalyzed by the Stonewall riot of June 28, 1969 in New York City . Its immediate precursor was the homophile movement of the 1950s and 1960s. As the trigger of the modern lesbian and gay movement in German-speaking countries, the film Not the homosexual is perverse, but the situation in which he lives (1971) by Rosa von Praunheim is considered .

The lesbian and gay movement is an identity movement that tries to change the symbolic representation of homosexuality through its public appearance . In the USA, this was mainly done by appropriating terms that had no negative connotations such as gay and lesbian, which stood in contrast to swear words such as queer , but also replaced defensive self-names such as “homophiles”.

In Germany, the predominantly student gay movement of the early 1970s appropriated the term "gay" in order to remove the swear word character from this term, but also to provoke the public to confront their prejudices. A similar strategy has been followed in the USA since the 1990s through the appropriation of the term queer .

Main article: History of the lesbian and gay movement

In New York, the Gay Liberation Front (GLF) was formed immediately after the Stonewall uprising in June 1969 . As the first organization willing to stand up for the liberation of gays and lesbians in open confrontation , the GLF and the Stonewall uprising that preceded it marked a completely new quality. By making lesbians and gays visible, she laid a foundation for all subsequent liberalization, although her goals went far beyond the integration of a minority.

The establishment of lesbian feminism goes back to the second annual congress for the union of women on May 1, 1970 in New York, where the manifesto of women-identified women was distributed with a happening . The lesbian women, who confronted the final plenary with a series of resolutions, gave themselves the name Radicalesbians after the congress .

The separation from the gay movement initially provoked severe criticism from the GLF women. But the invisibility of lesbians in the GLF, at the end of the charge of sexism , of ignorance of the problems of women finally led to their departure. The lesbian-feminist movement said goodbye to the term gay and adopted the terms lesbian and dyke . In 1971 the Furies , based in Washington, D. C., developed the program of lesbian separatism and transferred it to the organization of their private lives.

In the 1970s the pink triangle became an international symbol of the gay movement. It deals with the identification of the prisoners in the concentration camps in the era of National Socialism back that was used for prisoners who were interned because of their homosexuality.

In the USA he found v. a. as a sign of the HIV / AIDS activism group Act Up with their saying "Silence = Death" and can also be found on works by Keith Haring . For this, however, it was turned 180 degrees to express the hope for a better way of dealing with AIDS in the near future.

Since the 1990s, however, the rainbow flag designed in the USA in 1978 has prevailed and replaced the pink triangle as the preferred symbol of the LGBT / LGBTTIQ movement. The pink angle can still be found in the Amsterdam Homomonument from 1987, on the Cologne memorial for the gay and lesbian Nazi victims and at many other memorial sites.

The Israeli gay and lesbian movement began in 1975 with the establishment of the Society for the Protection of Personal Rights (Hebrew: Agudah). This came about mainly thanks to British immigrants and in the early years served to support gays and lesbians. Today Israel is a very progressive country in terms of gay and transgender rights. In 1988 the Sodomy Law was repealed in the Knesset. In 1992 the same rights could be enforced on the labor market and a year later the discrimination in the army was lifted. After Dana International won the Grand Prix de la Chanson in 1998, transsexuals were included in the movement. In the same year, Michal Eden was the first officially elected gay man to receive a seat on the Tel Aviv City Council. In 2003 the Knesset decided that homosexual couples should receive further tax breaks.

In the Federal Republic of Germany

In Germany, the premiere of the film Not the homosexual is perverse, but rather the situation in which he lives (FRG 1970, director: Rosa von Praunheim , screenplay: Rosa von Praunheim, Martin Dannecker , Sigurd Wurl) at the Berlin Film Festival in 1971 was the trigger the gay movement. In the same year, the Homosexuelle Aktion Westberlin (HAW), the Rotezelle Schwul (RotZSchwul) in Frankfurt , the Homosexuelle Aktion Köln (HAK), after their dissolution (around 1974), the Schwule Aktion Köln (SAK) and the Gay were founded Liberation Front (GLF) in Cologne (December 1971). In the months that followed, similar groups were founded in other major and university cities, e. B. in Hamburg the Homosexual Action Hamburg (HAH), in Bremen the Homosexual Action Bremen (HAB).

In 1972 the first gay demonstration in the history of the Federal Republic of Germany was held in Münster.

In 1973/74 there was an important strategy discussion in the gay movement, the so-called queer dispute . The conflict broke out at the Pentecost meeting in West Berlin in 1973. When the gays who had come from France and Italy appeared in women's clothes at the final demonstration with over 700 participants, a scandal broke out, which eventually expanded into the HAW-internal strategy debate. The result was the split into an “integrationist” wing made up of orthodox Marxists and the radical feminist faction .

In 1975 the "rosa" was founded as a newspaper by the Hamburg HAH, under the responsibility of the artist Nicolaus Schmidt , then a student. From number 8 in 1977, the Bremen group Schwule Aktion Bremen joined the newspaper editorial team.

From 1977 onwards, various groups were formed around the Berlin AHA ( General Homosexual Working Group ) that wanted to influence large social organizations. The Ecumenical Working Group on Homosexuals and Churches (HuK) was created on the fringes of the Evangelical Church Congress in 1977, the Homosexuality Working Group in the Public Services, Transport and Traffic Union (today ver.di ), the Schwusos and the Federal Homosexuality Working Group of the then still FDP- near young democrats (1980). Also at the end of the 1970s, the gay teachers' group in the Education and Science Union was formed . On June 30, 1979, the first CSD parade took place in Bremen and West Berlin; organizing an annual Christopher Street Day commemorates the Stonewall uprising in New York, which sparked the rise of queer movements. The gay movement got a boost from the coverage of the first major event Homolulu in Frankfurt / Main by the NARGS group from July 23 to 29, 1979.

The 1980s in Germany were mainly characterized by the institutionalization of the lesbian and gay movement. Between December 1980 and May 1986 alone, the number of lesbian-gay emancipation groups increased from around 148 to 416. The first official party committee to be established in the FDP regional association in 1981 was a homosexuality working group, whose active members left the FDP in November 1982. In 1982 the lesbian ring was created as an umbrella organization for lesbian women and in 1986, as its gay counterpart, the Bundesverband Homosexualität (BVH). In the federal German student councils ( ASten ) from 1979/80 a large number of gay presentations were created. It was an important part of the self-image that the presentations were officially integrated into the AStA. This sometimes had to be fought for in several legal proceedings against the state university administration (for example at the universities of FU and TU Berlin). Later so-called autonomous lesbian and gay units were set up almost everywhere , which are elected by the lesbian and gay plenary assemblies at colleges and universities.

In 1981 Thomas Grossmann published his coming-out guide " Gay - so what?"

In the second half of the 1980s, the immune deficiency disease AIDS cast its shadow over the gay movement. On the one hand, numerous prominent activists died in the following years; on the other hand, it was now a matter of fending off a repressive health policy, such as the Bavarian domestic politician Peter Gauweiler in particular tried to promote. In 1986 he called for internment camps to be set up for AIDS sufferers.

Despite its successes in AIDS politics, which brought homosexuality to the general public as a topic and the immorality of homosexuality fell as a result of the AIDS debate, the gay movement got into a crisis of meaning towards the end of the 1980s, which it shared with almost everyone other social movements shared. Many withdrew from the movement in disappointment. Because of these trends, some former activists pronounced the gay movement dead in 1989.

In the early 1990s, the number of participants in the German CSDs exploded (around 500,000 people in Berlin). At the same time, active participation in traditional political emancipation groups dwindled. At the same time, however, the annual Transgeniale CSD was created in Berlin in 1997 as a political alternative to the big CSDs. In the early 1990s, numerous leisure clubs with an apolitical orientation also developed.

After the BVH was dissolved in 1997, the LSVD , which was founded in Leipzig as SVD, is now the largest homosexual civil rights organization in Germany with around 3000 members .

The history of the gay movement (especially that of the German gay movement) has been documented by the Gay Museum in Berlin since 1985 and has also been made available to the public since 2004 in a permanent exhibition.

Since the mid-1990s, efforts by gay and lesbian activists have led to gradual advances in legal equality for same-sex partnerships in several European countries, Canada and New Zealand. Several countries introduced the possibility of a registered partnership or allowed same-sex couples to marry .

Internationally, both the increasing network formation under the leadership of the International Lesbian and Gay Association ( ILGA ) and a radicalization of parts of the gay and lesbian community are observed. The latter found its expression in the formation of the Queer Nation and is described by the term Gay Nationalism . The gay and lesbian emancipation is also expressed in cultural terms, e.g. B. in the form of film festivals such as Enchanted .