Lidice (German Liditz ) is a municipality in Okres Kladno in the Czech Republic . It is located five kilometers east of Kladno and 20 km west of Prague in the Central Bohemian Region . During the Second World War in Lidice in 1942 almost all male residents were murdered by the security authorities of the National Socialist occupying power and the village was destroyed. This crime took place as part of the acts of revenge following the assassination attempt on Reinhard Heydrich in 1942. After the war, Lidice was rebuilt 300 m from the old town. In the place of the former Lidice there is now a memorial and a museum.

From the Middle Ages to the occupation

Lidice was first mentioned in a document in 1306 in the course of an inheritance and belonged to various Prague and Kuttenberg citizens at the beginning of the 14th century . The existence of a "castrum Luticz" is documented for the year 1309. In 1415 Petr Meziříčský acquired parts of the village from Prague's old town and gave them to his Makotřasy rule . During the Hussite Wars , Meziříčský's possessions were plundered by several thousand rebels from Louny , Žatec and Slaný when they moved to Prague to support their allies.

After Meziříčský's death, several changes of ownership followed. In 1470, Jetřich Bezdružický von Kolowrat acquired Makotřasy and later Buštěhrad . He united the property and until 1713 the whole of Lidice came under the rule of Buštěhrad. Franziska Sibylla Augusta von Sachsen-Lauenburg was one of the other owners . After the death of her daughter, the Bavarian Elector Maximilian Josef inherited the lands. During his reign, coal mining began in the area. In 1805 Maximilian handed over the rule of Buštěhrad to Archduke Ferdinand , who handed it over to Ferdinand the Benevolent in 1847 and thus became the property of the imperial courts. Until the replacement of patrimonial in 1848, Lidice belonged to the Buštěhrad estate.

The place in the valley basin of Lidický potok was dominated by the parish church of St. Martin the Elder, whose baroque redesign in 1732 was directed by the builder Václav Špaček. With the industrial boom of Kladno , many of the residents made their living there as miners and smelters from the middle of the 19th century. After the German occupation of Czechoslovakia, Lidice belonged to the Protectorate of Bohemia and Moravia from 1939 . In 1942 Lidice consisted of 102 houses and had 503 inhabitants. There were 14 courtyards, a mill, three grocery stores, three taverns, two butchers and the church. 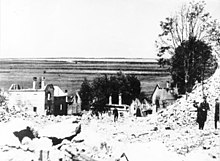 Lidice after being destroyed in 1942

The memorial in spring 2009

On May 27, 1942, Reinhard Heydrich , head of the Reich Main Security Office and Deputy Reich Protector of Bohemia and Moravia, was so badly injured on the way to his office on the Hradschin in Prague by an assassination attempt by Czechoslovak resistance fighters on behalf of the Czechoslovak government in exile that he was injured on May 4. June 1942 died. As a result, the National Socialists initiated massive retaliatory measures against the Czech civilian population. The claim that the villagers housed the assassins later turned out to be false. The only point of reference of the Gestapo were the two officers Josef Horák and Josef Stříbrný, who came from Lidice and who had served in the Royal Air Force in exile since the beginning of the occupation . However, there was no connection between the two and the attack at any time.

On the evening of June 9, 1942, German police forces (members of the Gestapo , the SD and the Schutzpolizei under the command of SS officers of a special commission and the commander of the Sipo in Prague) surrounded Lidice with the support of the Czech gendarmerie and blocked all access roads there Those involved in the attack were suspected. The following night the villagers were rounded up. All 172 men over the age of 15 were taken to the Horák family's yard, where they were shot on the morning of June 10th. With a fourteen-year-old boy taken by his father, the number of those murdered on June 10th was 173. The mayor František Hejma was one of the last to be murdered because he had to confirm the identity of the victims.

According to the historian Stefan Klemp , the shootings were primarily carried out by members of the security police, with Horst Böhme in command . 195 women, after being separated from their children in a gym in Kladno , were deported to the Ravensbrück concentration camp , where 52 of them were murdered. On June 16, 26 other Lidice residents were executed at a shooting range in Prague Kobylisy, including 7 workers who worked the night shift on the night of June 9-10, as well as two 15-year-old boys and the Horák and families Stříbrný. Six pregnant women were brought to Prague, separated from their newborns after delivery and also deported to the Ravensbrück concentration camp.

Lidice was set on fire, blown up and then leveled by trains of the Reich Labor Service to completely wipe it off the map. The SS and Police Leader Karl Hermann Frank ordered the "evacuation" of the village . The complete destruction of Ležáky by the occupying forces a few days later was comparable to this “retaliatory measure” .

Female survivors returned from captivity and were able to live in the newly built place from 1949.

Fate of the Lidice children

After separating from their mothers, the children were deported to the “Umwandererzentrale Litzmannstadt” camp at Gneisenaustrasse 41 in Litzmannstadt and segregated according to racial criteria. Seven of these children were brought to a Lebensborn home for Germanization , three more had previously been sorted out in Kladno. The other 81 children were deported to the Kulmhof extermination camp and gassed there in an SS car. One of the children segregated in Kladno was later murdered in the same way along with the 11 children from Ležaky .

The other nine children who had been singled out for “Germanization” were found again after the Second World War, as were two of the six who were born after June 10, 1942; the other four had died. Seven children under a year old were also placed in a children's home, six of whom survived the war. A total of 17 children were found.

Monument to the Children of Lidice, 2001

From 2000, the existing memorial was extensively renovated: the sculptor Marie Uchytilová created a bronze group of 82 people. It is intended to commemorate the children from Lidice who were killed after their deportation and at the same time represent a memorial for all children who are victims of war. The existing rose garden was replanted with 25,000 rose bushes.

In 2019 there was a conflict between memorial staff and descendants of the victims of the massacre, which made waves in the Czech Republic. The historian Vojtěch Kyncl, an employee of the Academy of Sciences of the Czech Republic , announced that shortly before the massacre, a woman from Lidice reported her Jewish lodger, who had been able to hide in the village, to the police. The betrayed Jew was murdered in Auschwitz . Martina Lehmannová, who has headed the memorial since 2017, suggested that we also remember the denounced Jew. Through the announcement of the denunciation and the suggestion of the director of the memorial, some of the descendants of the victims of the massacre saw the honor of their murdered parents and grandparents tainted and declared that they would no longer cooperate with the memorial. In January 2020, Minister of Culture Lubomír Zaorálek gave Martina Lehmannová the choice of resigning or being dismissed. The director of the memorial then resigned. Ten employees went with her.

When the horrors of Lidice became known, several municipalities adopted the name Lidice (or Lídice in Spanish ). So one finds

There are districts with the name Lidice in Lima (Peru), Caracas (Venezuela), Regia (Cuba) and Gan Yavneh (Israel).

Heinrich Mann , who in the United States in exile was, the events of Lidice in 1942 processed in his novel Lidice . After some difficulties, this was first published in 1943 by the Mexican publisher El Libro Libre, which had been founded a year earlier by German authors in exile.

The Czech composer Bohuslav Martinů wrote a memorial for Lidice during his stay in exile in the USA in 1943 . It is a one-movement work for large orchestra and quotes Beethoven's 5th Symphony , among other things .

The composer Max Brand , who emigrated to the USA, wrote the ballad for Lidice for voice and piano in 1942 .

The Argentine composer Juan María Solare wrote the piece Lidice for cello and piano in 2011 , with versions for viola and piano as well as clarinet and piano.