Zlonice lies at an altitude of 223 meters above sea level. NN. on the road between Slaný and Litoměřice , in a scenic area near the legendary mountain Říp and the Bohemian Central Mountains ( České Středohoří ). 2279 inhabitants live on an area of ​​1605 hectares (as of 2006).

In 1318 the village with the church and festivals was first mentioned in writing. In the economic development of the agricultural village, the noble family Walkaun von Adlar had the largest share in the period from 1544 to 1707 and the counts and later princes Kinský from 1721.

The Walkaun von Adlar family temporarily joined the Reformation ; Bohuchwal Walkaun von Adlar (Czech Bohuchval Valkoun z Adlaru) converted again from the Bohemian Brothers to the Roman Catholic Church and some time afterwards he was responsible for the arrest of 22 of his peasants who had returned to the Protestant faith; this mass arrest took place on May 5, 1629 in Zlonice. He reported the lay preacher Georg Balthasar from the Tmáň district as the leader of the peasants , who was executed in Prague on August 14, 1629 and is now considered an evangelical martyr. It was also Bohuchwal Walkaun von Adlar who had the old German fortress Stauf (Štáf in Czech) converted into a Renaissance castle at the beginning of the 17th century . He also rebuilt the parish and school and had a hospital built for the poor. It was thanks to him that the village was elevated to a town in 1705. Wenzel Johann Adalbert Walkaun von Adlar sold Zlonice in 1707 and instead acquired the Hokov estate .

The Kinský family brought economic and cultural growth to the place. She had factories built, renovated the Church of the Assumption of Mary from 1727 to 1744, built a hospital for the poor in 1745 and built a new parish from 1750 to 1753 based on plans by Kilian Ignaz Dientzenhofer . Since 2007 Zlonice is again a Městys . 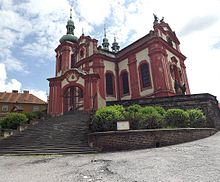