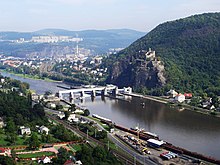 The Hazmburk , the symbol of the Bohemian Central Uplands

The Bohemian Central Uplands ( Czech České středohoří ) is a low mountain range in the Czech Republic . It is located in northern Bohemia on both sides of the Elbe . It extends over a length of 80 km between the North Bohemian Basin in the west and the Lusatian Mountains (Lužické hory) in the east. In the north it merges almost seamlessly into the mountain landscape of Bohemian Switzerland . In the south are the extensive lowlands of Eger and Elbe. The Bohemian Central Uplands have been under landscape protection as ChKO České středohoří since 1976 .

The striking conical shapes of the mountains in the south-western part of the mountains, which rise from an almost flat, treeless landscape, are particularly worth seeing in the Bohemian Central Uplands . In the central part of the mountains, the mountains literally come together to form shield-like ridges. Further north, the landscape becomes more mountainous, with often gorge-like valleys and elevations between 600 and 700 meters. Equally characteristic of the landscape is the deeply cut river course of the Elbe, which in the past was often compared to the Rhine valley on the Loreley . The narrowest section at the beginning of the Elbe breakthrough is called Porta Bohemica (Bohemian Gate).

The following text can be found in a travel guide from 1912:

"In the whole chain of basaltic elevations, which stretches from the Sudetes across Germany to the High Eifel, the low mountain range represents the most richly developed link. Its Klingstein and basalt heights go through all levels of the cutest dimension (barely 10 m high) to that enormous size that we encounter in the Thunder Mountain; sometimes they meet us individually, sometimes in larger groups, 'like a crowd of children gathering around a handsome father'; Their form is extraordinarily varied; sometimes they appear as gently rounded peaks, sometimes as steep cones or jagged, prong-like tips, sometimes as broad ridges with an attached summit. This variety is mainly due to the picturesque charm of the North Bohemian landscapes. The same is, however, increased considerably by the addition of the romantic element. 'No mountain shape,' says Cotta, 'was more suitable for the construction of knight's castles and chapels, for the erection of crosses and images of saints, from which it is then crowned many times'. "

The area was first geologically examined in the middle of the 19th century by Ferdinand von Hochstetter on behalf of the Imperial and Royal Geological Institute. The geological recordings were continued by Josef Emanuel Hibsch , who was the first to create detailed geological maps of the Bohemian Central Uplands. In his honor there is a small museum in his birthplace Homole (Hummel) . The mineral hibschite bears his name.

Like no other mountain range in Central Europe, the Bohemian Central Mountains are shaped by volcanism in the Tertiary . Huge basaltic lava flows and magma masses , volcanic ashes and tuffs were deposited. In the North Bohemian Basin near Most , the influence of the scorching magma flows partly led to slagging, but partly also to better coalification of the lignite deposits there .

The subsurface of the mountains is often formed by orthogneiss , migmatite and migmatized paragneiss - rocks that are also known from the neighboring Ore Mountains . At Roztoky (Rongstock) , the ore veins contained therein were the subject of poorly profitable medieval silver mining .

Analog neighboring areas ( Elbe Sandstone Mountains , Lusatian Mountains , Daubaer Switzerland ) are found in the subsoil and sandy, clayey and calcareous sediments of the Cretaceous , which in the Cretaceous sea have been deposited. Sandstones and limestone are characteristic, especially on the southern flank of the mountains . In Čížkovice a Cretaceous is Kalklagerstätte for cement production reduced.

The occurrence of the Bohemian garnet ( pyrope ) on the south side of the mountains near Podsedice and Třebenice (Trebnitz) , which is found there in loose tertiary sediments, is famous . The discovery of some diamonds in Podsedice caused a sensation ; This makes the Bohemian Central Uplands one of the few places where this rare gem was found in Europe.

Since 1976, almost the entire area of ​​the Central Bohemian Uplands covering an area of ​​1063.17 km² has been protected as Chráněná krajinná oblast České středohoří . The protection purpose is the preservation of the landscape relief, which is unique in Europe, with the volcanically formed elements and the protection of the unique flora and fauna . The protected area is of particular importance in the production of genetically perfect seeds for forestry. Particularly valuable landscape areas are also placed under special state protection as nature reserves and national nature reserves . The seat of the landscape protection area administration is in Litoměřice (Litoměřice) .

Despite the strict protection status, the landscape of the Bohemian Central Uplands is more endangered than ever. Like the neighboring Ore Mountains, the Central Bohemian Uplands have been particularly affected by the pollutant emissions of the North Bohemian lignite power plants in the past few decades. It is only thanks to the completely different type of forest with well-mixed hardwood stands and the soils that are more alkaline on volcanic rocks that the forests did not die off over a large area. The Bohemian Central Uplands has always been a center of the stone industry. Particularly in the last few decades there has been a comprehensive expansion of the quarry operations . In the meantime, entire mountain tops have fallen victim to them.

The planned closing of the gap on the Dresden – Prague motorway between Ústí and Lovosice through the landscape protection area, for which a special ministerial permit was obtained, was seen as particularly problematic . Despite widespread protests from citizens and environmental organizations, the Czech government stuck to the (cheaper) above-ground variant, which, according to opponents, threatened to destroy or impair the landscape on the left bank of the Elbe with its unique biotopes . Legal disputes delayed the start of construction until October 2007.

Overgrown orchard on the Oblík with a view of the Raná 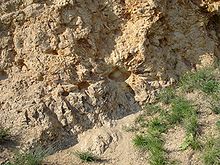 The first travelers visited the wonderful mountains in the north of Bohemia as early as the 19th century . This is how the early world traveler Alexander von Humboldt came to the Bohemian Central Uplands. He described the view from the 835 m high Milešovka (Milleschauer or Donnersberg) , the highest point in the Bohemian Central Uplands, as the third most beautiful on his extensive and varied journeys.

Crossing at the Schreckenstein by Ludwig Richter

Painters captured the landscape in romantic pictures. One of the most famous paintings is the picture Überfahrt am Schreckenstein by Ludwig Richter , which the artist created in 1837 during a stay in the Bohemian Uplands. As is customary with romantic paintings of the time, it shows a composition of various motifs from the area, which does not appear in nature. Caspar David Friedrich too often stayed in the Bohemian Central Uplands; His masterpiece Bohemian Landscape (around 1810) is best known . The Aussig painter Ernst Gustav Doerell also left many rather unknown paintings , whose pictures can be seen today mainly in the town museum of Ústí nad Labem . 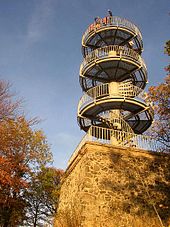 Lookout tower on the Varhošť

With tourism developing at the end of the 19th century, mountain inns and hiking trails emerged. The paddle steamers of the Saxon-Bohemian Steamship Company no longer only carried locals, but also an increasing number of day trippers on Sundays. In 1905, a path was created with the cone path from Milešovka to Ještěd (Jeschken) , which opened up many of the cone mountains to hikers like on a string of pearls. Should be mentioned also the former LA-way between Litoměřice and Usti ( L eitmeritz- A lockingly), which to date is one of the most beautiful trails in Bohemia.

After the expulsion of the German population from 1945 onwards, many of the tourist objects that were once laboriously created by the mountain associations fell into disrepair . However, the dense network of hiking trails has stood the test of time. Only the private commitment of the tourist association in Lovosice , for example, the preservation of the historic Black Mountain cottage on the Lovoš owe. The construction of the observation tower on Varhošť represents the only significant investment in tourism in 40 years of socialism .

This negative development did not come to an end until the political change in Czechoslovakia in 1989. Since then, a new tourist infrastructure has slowly developed. 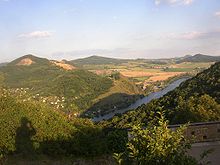 The railway line from Prague to Dresden has been running in the Elbe Valley since 1850/51. It was once planned as part of a long-distance connection from Vienna to Central Germany and is still one of the most important railways in Europe today. In addition, the former Austrian Northwest Railway runs on the right bank of the Elbe and is now mainly used as a transit route for goods traffic from Scandinavia to Southeast Europe.

The North Bohemian Transversal Railway, once designed as the main line between Teplice and Liberec , runs through the Bohemian Central Uplands in a west-east direction . Because of the unfavorable route with steep gradients and narrow curves, this route is only of regional importance today; continuous traffic no longer takes place today.

Since 1938 there have been plans for the construction of a Dresden – Prague motorway through the Bohemian Central Uplands, which is to replace trunk road No. 8 currently serving as European route 55 . By 2006 this route should be completed as the D8 motorway through the Bohemian Central Uplands. For reasons of nature conservation, the realization was delayed because the route cuts through valuable, protected natural areas and financial means for the construction of a longer tunnel were not available. Land necessary for the construction of the motorway was acquired by various environmental groups and individuals (such as the chairman of the Děti Země civil association , Miroslav Patrik ) in order to prevent this route. In April 2007, opponents of the planned route failed with an objection to the Czech Ministry of the Environment. Construction of the controversial section began in October 2007. This was officially put into operation in December 2016 - but initially with only one lane in each direction, as there had been movements in the geologically difficult subsoil near two valley bridges in the area of ​​the municipality of Prackovice nad Labem , which made further work necessary to secure it. The autobahn has been open to four lanes since September 2017.

According to the responsible motorway and trunk road administration, the subsoil at the level of the bridges is monitored for movement at 100 measuring points. Further securing construction work is to follow on the section in 2018. The 149-kilometer-long motorway connection between Dresden and Prague took 25 years to complete, including planning, until December 2016.

The Elbe has been used as a shipping route and an important trade route since ancient times . Shipping on the Elbe was once of enormous importance, especially for the export of coal from North Bohemia. Even today the extensive facilities of the Elbe port in Ústí (Aussig / E.) Testify to a time when it was the largest inland port in Europe . The Äppelkähne , which once brought fruit from the Bohemian Central Uplands to Central Germany, have become almost proverbial .

→ Main article : List of mountains in the Central Bohemian Uplands 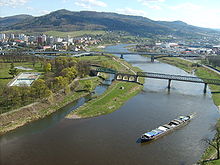