A The ([ daɪ ], English for "dice", "flakes", dt i plural A. "This"; English plural.:. Dice or the [ daɪs ] and the [ daɪ ]) is in the semiconductor and micro-systems technology the name of an individual, unpackaged piece of semiconductor - wafer . Such a die is usually obtained by sawing or breaking the finished wafer into rectangular parts ( dicing ). Usually there is a component on a die, e.g. B. a transistor, light emitting diode, or a complex assembly, e.g. B. Integrated circuit , a microsystem . In order to benefit from parallel production on the wafer for as long as possible, the dicing takes place last in the normal production process, directly before installation in a housing or attachment to a circuit carrier (see direct assembly ). These are then called " chips " or " naked chips ". Even if a wafer (planned) is divided (even unstructured) before the component or assembly is completed, the sections are referred to as dies.

The one of the NE555 with bond wires 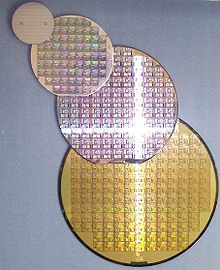 Wafers from 2 inches to 8 inches

The term “ die ” comes from kitchen English: “ slice and dice ” means - for example a cucumber - “first cut into slices and then dice”. Accordingly, one begins with the production of integrated circuits with a - cucumber-like - silicon bar , this is then "cut into slices" - from this the " wafer " = "waffles" - and then "chopped up" - from this then the " dice " = "Cube". Since the wafers are very thin, the “ dice ” do not look cube-shaped, but rather correspond to very flat cuboids in their shape.

" Bare chip " or " bare die " (German "Nacktchip") are integrated electronic components that are not conventionally built into a plastic or ceramic housing, but are processed without a housing. They are applied directly to a circuit board or a ceramic substrate and electrically connected to surrounding components by means of wire bonding .

That of an AMD Opteron Six Cores microprocessor

As integration progresses, more and more assemblies that were previously attached as individual chips next to each other on a circuit board are combined on a common chip. Meanwhile, several hundred million transistors for CPUs , GPUs or RAM are housed on a die with an area of ​​around one square centimeter .

Digital and analog signal circuits can increasingly be accommodated on a chip with power electronic elements (e.g. BiCMOS technology).

A combination of two complementary assemblies, such as CPU and cache , on the same chip can be described with the term “ on- die ”: The CPU has the cache “ on- die ”, which enables higher clock rates and bus widths and thus the exchange of data significantly accelerated.

The assembly and connection technology (AVT, packaging ) deals with the further processing of the dies - housing and integration into the circuitry environment .

A known good die (KGD) is a semiconductor chip that has been tested according to the specifications and found to be good, which, depending on the product , can contain a single component, for example a transistor , or a complex circuit such as a microprocessor . Good or defective data can also be determined in the wafer assembly using electrical needle testers. Defective components used to be identified by a colored dot ( inked ) and are excluded from the subsequent process of contacting and housing (cycle II, packaging ).

The ratio of useful to the total number of all available on a wafer as this will yield (engl. Yield ) and is an important indicator for evaluating the manufacturing process and the efficiency of a production line.