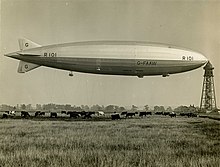 The R101 was built by the state-owned Royal Airship Works in Cardington in rigid airship design and was intended, among other things, to connect the United Kingdom with its overseas colonies . When the airship crashed near Paris on the night of October 4 to 5, 1930, the fire roller of the hydrogen explosion killed 48 of the 54 people on board, including the then British Aviation Minister Lord Thomson and the designer of the R101 Vincent Richmond . At the state funeral of the victims, Hugo Eckener and Hans von Schiller were also present as representatives of the German airshipmen . Hugo Eckener was called in as an expert in the investigation into the cause of the accident. 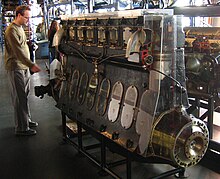 The R101 was powered by five Beardmore diesel engines , each with an output of 485 kW . It had facilities for the transport of 100 people, including two passenger decks with a dining room for 60 people and a smoking room for 20 passengers. The R101 outperformed the only other rigid passenger airship in existence at the time, the LZ 127 Graf Zeppelin , in almost all respects. The German airship captain Hugo Eckener also visited the ship on a visit to England.

The revised ship was filled with hydrogen gas on September 26, 1930 and was to be retired on the same day. However, the wind was very strong, so that the airship was not stopped and put to the anchor mast until October 1st .

At 4:30 p.m. on October 1, the R101 left the anchor mast for a final 24-hour test drive. The engines and other systems should be checked. If the tests go well, the journey should be stopped earlier. The ship left Cardington south for London and then headed east following the Thames . The ship spent the night over the North Sea. Due to the failure of a cooler on the front starboard engine, it was not possible to run a maximum speed test. All other tests were rated as successful and it was noted that the flight characteristics had improved significantly as a result of the extension. The ship returned to its anchor mast in Cardington at 9:20 a.m. the next morning after about 17 hours in calm flying weather.

The subsequent evaluation showed no defects or leaks. The necessary maximum speed test should be made up for during the upcoming India trip.

Plans for a transcontinental connection

The British Empire needed a reliable means of transport that was as fast as possible in order to be able to transport at least administrative officials and military personnel quickly to the focal points of the colonial areas in upheaval. In addition, business travelers and tourists were discussed as a target group for the aviation and operating companies to be founded.

On October 4, 1930 at 6:24 p.m., the R101 took off under Captain Raymond Hinchcliffe and pilot H. Carmichael Irwin in a drizzle for a demonstration drive to Karachi , which at that time belonged to the colony of British India . After the continental crossing (the passage through the Rhone Valley was chosen to bypass the Alps to the west) and the Mediterranean crossing, a stopover should be made in Egypt to refuel.

Among the passengers was the British Aviation Minister Lord Thomson, accompanied by other airship experts, Major George Herbert Scott , who had carried out the test drive of the R100 to Canada, and Air Vice-Marshal Sir Sefton Brancker, who was considered an experienced airship from the time of the First World War and was friends with Hugo Eckener. However, most of the 50 passengers were civilians.

The airship crossed London shortly after 8 p.m. The outer shell was already damaged by a storm over the English Channel and some of the 16 gas cells were exposed. From October 6th, the European daily newspapers reported the following details about the following events: After crossing the French Channel coast, visibility increasingly deteriorated. The passengers and off-duty crew members went to bed early because there was no longer any view. The radio operator made radio contact with the French airfield Le Bourget in order to keep himself constantly informed of the position and course of the ship by means of cross bearings. The last radio contact by the radio operator on duty Disley, who survived, took place at 1:43 am. Three minutes earlier, the ship had lost about 500 m in height due to violent turbulence, and a downwind tore the ship down. The flight engineer on duty, Leach, confirmed the information and added that strong gusts of wind had seized the ship, visibility was minimal and the pilot no longer had any information about the flight altitude, so he ordered all engines to be switched on in order to gain altitude again with maximum thrust . The ascent attempt failed, apparently the elevator no longer responded. The bow of the airship had already touched some trees on the ground, which woke the passengers, and at the same time the crew members, including the radio operator, were thrown from the rigging. The radio operator fell from the airship, which at that moment was only a few meters above the ground. The stern of the airship rammed a hill about 100 to 150 m further, causing the explosion. The impact triggered a pressure wave that caused further damage to the ship. A ruptured water tank spilled over a middle cabin, ensuring the survival of the passengers there, who only suffered severe burns and fractures. Flight engineer Lead managed to cut through the cabin wall with a knife; with him other people were able to escape from the cabin. The flames ignited the supplies of fuel and everything combustible; the airship burned for two more days until all the flames were extinguished.

The wreck of the R101 - probably two days after the crash, before the accident site was cordoned off by military units.

On the ground, the residents of Beauvais and the neighboring towns to the north had been roused from their sleep by the loud noise of the engines running at full load. When the airship exploded, people immediately ran to the site of the accident to help. The gendarmerie informed the French interior minister, who informed the French aviation minister Laurent Eunac, who arrived at the scene of the accident from Paris in the early hours of the morning. He was followed shortly after by other military officers and the British ambassador in Paris. The search of the area had started in the night, the majority of the dead had been burned beyond recognition. On the basis of the passenger list, three people were still considered missing even days later, their remains are believed to be in the ashes of the completely burned-out cabins. At least eight survivors were immediately rescued and taken to the hospital in the city of Beauvais, where two members of the crew died. Only six people survived the disaster.

The German airship designer Hugo Eckener was informed of the disaster by radio during a test flight from Lake Constance to Berlin. He broke off the flight in Leipzig, where he was interviewed. In his opinion, a combination of coincidences and the unfavorable weather led to disaster: Eckener stated that at the time of the disaster - just five hours in the air - the ship still had full ballast and fuel tanks. Presumably the ship was overloaded because they wanted to make as few interruptions as possible in order to arrive quickly in Egypt. The trip should add to the prestige of the UK aviation industry. The overloaded airship was too sluggish for the prevailing gusty weather conditions and the size of the ship was his undoing when it was hit by strong winds near the ground. Eckener saw the main cause of the catastrophe in the lack of information about the actual flight altitude, otherwise the impact could have been prevented by emptying the ballast tanks. It could not be determined whether the elevator was already defective before the impact, as this area of ​​the ship was deformed when it came into contact with the ground.

The wreck remained at the site of the accident until 1931. Sheffield scrap dealers who specialized in stainless steel were hired to recycle it. The purchase of 5,000 kg of duralumin is recorded in the books of the Zeppelin company .

After this event, England gave up building more large airships .

The British heavy metal band Iron Maiden processed the story of the R101 in their song Empire of the Clouds on the album The Book of Souls from 2015. The stanza contained therein “She's the biggest vessel built by man / A giant of the skies / For all you unbelievers / The Titanic fits inside “is a lyrical trick: While the R101 was 237 m long , the RMS Titanic was 269 ​​m long. If the word "vessel" is interpreted as a hollow body, however, the enclosed space of the Titanic with 46,329 GRT (approx. 131,000 m³) was already well below the lifting gas volume of the R101.