The R38 was a rigid airship that was built in Great Britain in 1921 for the US Navy . The American designation ZR-2 was already attached to the fuselage during the test drives over Great Britain.

The construction was based on a German design for a light, ramping up war airship, which was designed less for high speeds or good maneuverability, but more for high altitude to avoid enemy aircraft. For example, the ring spacing was 15 m.

In the following weeks, three more test drives were undertaken to test the ship and to brief the delegation of the future crew who had come from the USA. 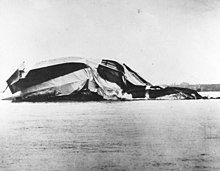 The wreck of R38 on the Humber

The fourth test run began on August 23, 1921. After a night over the sea, full load and maneuvering attempts were made the next day . The skeleton of the airship broke in the air. The hydrogen gas ignited in the front part; this part fell into the River Humber near the town of Hull . All the crew members who were in it perished except for Captain Wann. The rear part fell on a sandbar, in which four crew members survived. Overall, only five of the 49 English and American crew members survived the crash on August 24, including one American. 16 members of the US Navy, and thus almost all experienced US rigid airmen, died. R38 / ZR-2 was equipped with parachutes for all crew members who were at different stations, but most of the users of these parachutes landed in burning kerosene .

This disaster meant the end of British military airship travel and interrupted British airship construction for about 10 years. It was only continued with R100 and R101 . In 1922, the US Navy in Germany ordered the Zeppelin LZ 126 to replace the lost ship, which, under the name ZR-3 "USS Los Angeles", was to become America's most successful rigid airship.