LZ 130 was the last large zeppelin put into service before the Second World War . It was christened “Graf Zeppelin II” after Ferdinand Graf von Zeppelin in 1938 and provisionally approved in the same year. The very successful LZ 127 already bore the title "Graf Zeppelin" .

LZ 130 was a sister ship of LZ 129 "Hindenburg" and the last large rigid airship . The two ships were largely identical, but many new findings were applied in the design and development of the LZ 130. For example, a ballast water recovery system was installed from the outset for the first time in a zeppelin . It was used to condense water from the exhaust gases of the engines to compensate for the weight loss caused by the fuel consumption. The connecting cords between the shell and the metal skeleton were given a conductive graphite coating in the winter of 1937/38 in order to avoid a disaster like the one with the Hindenburg.

After the Lakehurst disaster and the end of the transatlantic airship era, the LZ 130 was scrapped on the orders of Hermann Göring in April 1940.

The most striking visual difference between the LZ 129 and LZ 130 was the arrangement of the propellers . While the "Hindenburg" had pusher propellers at the rear of the engine nacelles, the LZ 130 pull- type propellers were used. This change was intended in particular to ensure that the exhaust gas cooler of the ballast water recovery system on the machine nacelles was better flown by the propeller wind. 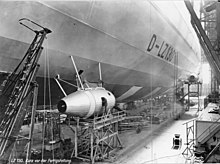 The airship was powered by four 16-cylinder Daimler Benz diesel engines , each with 588  kW (799  hp ) continuous and around 735 kW (999 hp) maximum output. This type of engine, LOF 6 , was later developed into a standard engine for naval ships and manufactured by MTU under the designation 672 until the 1970s . The motors were reversible, so they could run forwards and backwards. Their speed was around 1400 / min, that of the propellers around 700 / min, as they were driven with a reduction ratio of 2: 1. Different propellers were tested. Including a three-bladed all-metal screw, the angle of which could be set before the start of the journey. Before that, rigid two-part four-blade wood propellers were used.

Just like the LZ 129 "Hindenburg", the LZ 130 was also designed for the use of helium as a lifting gas. Negotiations with the government agencies of the United States dragged on for a long time. Political, but also massive foreign exchange and profitability problems on the part of the Deutsche Zeppelin-Reederei (DZR) torpedoed all consultations. (A detailed description of the problems can be found in the chapter "The problem of the helium question in Germany and in the USA" in the book "LZ 130 'Graf Zeppelin' and the end of airship travel" by Manfred Bauer and John Duggan.) In total there were a number of factors that ultimately prevented the United States from shipping helium. As early as January 1938, helium containers (large gas bottles ) had been unloaded from the German freighter Dessau in the Texan port of Galveston . The American Navy had made their helium tankers available for filling these containers. Only the American Interior Ministry under Harold Ickes refused the export permit against the background of the political situation in Germany. Safeguard clauses for the intended use of the lifting gas were also required. Helium was never exported. The 16 gas cells of the LZ 130 were also filled with hydrogen again.

The keel was laid on June 23, 1936 - one main ring and three skeleton rings were tipped and attached to the roof of the hall. The longitudinal beams were attached to this, so that a "nucleus" was created.

On February 14, 1937, the bow was installed. From February onwards, the covering began to be applied.

On August 15, 1938, the ship began to be filled with hydrogen. Starting on August 20th, testing of engines and electrics began, and the radio system was tested on August 22nd.

The baptism took place on September 14, 1938. In contrast to the festivities on the occasion of the christening of the "Hindenburg", this time only the staff of Luftschiffbau Zeppelin GmbH and the crew of the Deutsche Zeppelin-Reederei were present. No government representatives had come, only a brief telegram of greetings from the Reich Minister of Aviation Field Marshal Göring to Hugo Eckener conveyed congratulations. Hugo Eckener gave the baptismal address.

The Reich Ministry of Aviation approved LZ 130 on November 14, 1938 for one year until September 1, 1939 "for air traffic without passenger transport and outside of tropical regions ".

1. Voyage: The maiden voyage took place on September 14, 1938 immediately after the christening from 7:50 a.m. to 5:30 p.m. under the leadership of Hugo Eckener . It led from Friedrichshafen via Munich , Augsburg and Ulm back to the starting point. 925 kilometers were covered. There were 74 people on board , including representatives from the Reich Aviation Ministry, the German Aviation Research Institute , Luftschiffbau Zeppelin GmbH, the German Zeppelin shipping company as well as test technicians and engineers. The engines were only started after the airship had reached a height of about 100 meters. Hugo Eckener described the trip as "satisfactory" and "successful".

2. Voyage: The second voyage of over 26 hours was also a test drive under Hugo Eckener and Captain Hans von Schiller with a total of 85 people on board. It started at 8:08 a.m. on September 17, 1938. The morning was spent with various measurements over Lake Constance. The flight to the north began around noon (12:15 pm Stuttgart - 1:15 pm Frankfurt am Main - Eisenach - Eisleben ). Berlin was reached towards evening . After several laps at a low altitude, the journey towards Hamburg was continued. Further votes and tests were carried out over the Outer Elbe. Then it went on a direct course via Minden towards Frankfurt am Main, then towards Lake Constance . There, a large loop had to be made over Friedrichshafen because the harbor was covered in fog. At 10:17 a.m., after a distance of 2,388 kilometers, LZ 130 landed and was back in the Löwenthaler Halle shortly before 11 a.m.

4th voyage: September 25, 1938, departure at around 11 am under Captain Hans von Schiller (duration approx. 7 hours, 764 km, 40 crew members, 34 passengers and technicians). Tests were carried out at maximum altitude. Almost the entire journey took place at an altitude of around 2000 meters without having to let off much gas. Air-electrical tests were also carried out.

5th trip: September 27, 1938, eleven hours trip , on behalf of the Reich Aviation Ministry (RLM). A radio beacon was set up at the Rhein-Main airport and airship port . An attempt should be made to carry out radio loading. The hazy air made the experiments difficult despite the good weather conditions. The radio feed did not work perfectly - these problems also occurred in later attempts. There were also initial successes with the ballast water recovery system. 3.5 tons of ballast water could be obtained and the engines ran much more quietly due to the soundproofing effect of the system.

6. Voyage: September 28, 1938, another test drive on behalf of the RLM under Captain Sammt . Among other things, it should be investigated whether electrostatic charges led to the accident of LZ 129 "Hindenburg". This trip was carried out especially in thunderstorm weather conditions. Driving in normal weather conditions did not produce any useful results. The ship was driven in a crash front in order to avoid the escape of hydrogen gas through the pressure relief valves . The journey lasted almost 26 hours; over 2500 kilometers were covered. The ballast water recovery system met the engineers' expectations by producing about nine tons of water.

7. Voyage: October 31, 1938, start at 2:15 a.m. under Captain Sammt. This was the last acceptance run of LZ 130 and at the same time the transfer to the airport and airship port in Frankfurt am Main . The landing took place after almost 25 hours and over 2100 kilometers at 3:10 p.m. The airship and the crew were greeted by Gauleiter Sprenger at the new home port. After this voyage, LZ 130 received the “airship permit” on November 14, 1938. It was approved for air traffic and was entered in the German aircraft register, but with the restriction that it was not allowed to transport passengers.

8. Trip: “Sudetenland trip ” - This trip was carried out on the instructions of the Propaganda Ministry. After the referendum with a large majority in favor of Hitler and the NSDAP , a lot of propaganda means were exhausted, including a zeppelin ride over the "liberated areas". There were 62 crew members and 7 passengers, including German military, on board. The start took place on December 2, 1938, shortly after 10 a.m. Small parachutes with swastika flags and leaflets were dropped over Reichenberg , the capital of the Sudetenland , over which LZ 130 was hovering exactly at the time of Hitler's visit. Music and National Socialist election propaganda for the upcoming elections on December 4th could be heard from the loudspeakers of the LZ 130. Then LZ 130 drove to Reichenberg airfield and dropped 663 kg of mail. The onward journey was made more difficult by the deteriorating weather, so after a while it was decided to turn back. After leaving the Sudetenland, the ship got into low clouds and snow showers. There was also icing. Later, pieces of ice breaking off the propeller blades penetrated the outer skin of the airship. However, the damage was immediately repaired by the crew. At 5:46 p.m. the zeppelin touched down without any problems in a gusty wind and was brought to the airship hangar.

10th trip: Start: April 13, 1939. Among other things, radio and scouting basket tests were carried out. The trip lasted around 30 hours and covered almost 2,700 kilometers.

"Graf Zeppelin" in Bad Neustadt an der Saale in June 1939

24th trip: The "spy trip " was the longest trip that LZ 130 undertook with a duration of over 48 hours and a distance of 4203 kilometers. The main aim of this trip was to collect information about the English radar system ( Chain Home ). To do this, the airship drove north to the Shetland Islands and back relatively close to the British east coast . There were 45 crew members and "28 people for the measurements" on board. Start was on August 2, 1939 at 8:53 p.m.

In Albert Sammt's memoirs (“My life for the Zeppelin”, written by Ernst Breuning), this trip is described in the chapter “With the LZ 130 Graf Zeppelin on radio listening and radio tracking”.

At the end of August 1939, the ship was taken out of service on the grounds that there was a threat of war. The gas cells were emptied on September 1, 1939 and the ship was prepared for a longer layover in the airship hangar. Work was carried out to preserve the ship and to keep it ready for recommissioning. These were discontinued in January 1940.

After Hermann Göring's visit to Frankfurt on March 1, 1940, during which he showed himself to be very hostile towards the airships, on March 4 and 6, 1940, the general airman Ernst Udet issued an order to “scrap LZ 127 , LZ 130 and LZ 131 and utilization of the hangars at the Rhein-Main airfield ”.

Work had started on March 8, 1940, and on April 27, the report that the scrapping had been completed was announced. 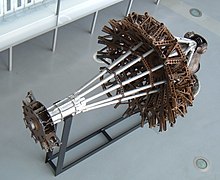