The Zeppelin LZ 7 Germany was the seventh of the airship Zeppelin GmbH in Friedrichshafen on Lake Constance built transport airship . It was operated by Deutsche Luftschiffahrts-Aktiengesellschaft , but crashed nine days after the maiden voyage on June 28, 1910 during a storm on Limberg near Bad Iburg in the Teutoburg Forest after one of the engines failed.

Landing of the airship “Deutschland” LZ 7 intended for passenger traffic on June 22, 1910 on Golzheimer Heide near Düsseldorf

LZ 7 “Germany” was 148 meters long, had a diameter of 14 meters and a lifting gas volume of 19,300 cubic meters. This made the Zeppelin larger than its predecessor models. Three engines developed a total of 275 kW (375 hp). One was accommodated in the driver's gondola, the other two in the rear gondola.

For the first time in the history of airship construction, Goldschläger skin was used in LZ 7 to construct the gas cells. A seven-fold layer of this bovine caecal skin was put together for this purpose.

The crew consisted of a guide, a driving engineer, two helmsmen and four to five machinists.

The passenger cabin installed in the middle of the airship offered space for 24 travelers. It was luxuriously lined with mahogany wood, ceiling beams and columns were adorned with mother-of-pearl inlays, and the floor was covered with a carpet. The furniture consisted of elegant wicker chairs and small tables. The occupants had a clear view through large sliding windows. During the journey, they were served food and drinks. The menu of the day included foie gras pate, Malossol caviar, lobster, cold French broiler chicken, pralines, French fruits as well as Deinhard Cabinet, Rhine and Moselle wine, cognac and Grand Marnier cordon rouge.

The construction of LZ 7 took place at a time of great enthusiasm for airship travel in the first decade of the 20th century. The accident at LZ 4 had n't changed that. After an emergency landing near Echterdingen on August 5, 1908, the airship was torn from its anchorage in a storm and went up in flames. Rather, the accident led to the “ Zeppelin donation of the German people ”, a fundraising among the population. It brought in more than six million marks , which flowed into the Zeppelin Foundation and enabled the establishment of Luftschiffbau Zeppelin GmbH . In November 1908, the Deutsche Luftschiffahrts-Aktiengesellschaft (DELAG) was founded, which was dedicated to passenger aviation . LZ 6 was the first zeppelin built for commercial passenger aviation in 1909. 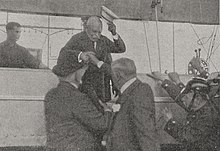 LZ 7 was built in Friedrichshafen the following year and named "Germany". The construction cost 550,000 marks. LZ 7 undertook its maiden voyage under the command of Count Ferdinand von Zeppelin on June 19, 1910. On June 22, LZ 7 arrived in Düsseldorf. The first round trip from there took place on June 24th. It caused astonishment among the 20 passengers, among them five women and three British, at the quiet ride and the view of the landscape from 200 to 300 meters above sea level.

Telegram from a passenger home, posted in Wellendorf (today at Hilter am Teutoburg Forest ): “Luftschiff Teutoburger Wald baeume geraten. nothing happens to me greetings - franz " 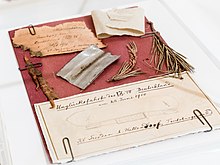 Devotional objects from the Zeppelin crash: branches and fragments

LZ 7 undertook the next voyage on June 28, 1910 under Captain Kannenberg. On board were Hugo Eckener and Alfred Colsman , the director of Luftschiffbau Zeppelin GmbH. In order to promote passenger transport in airships, DELAG invited 19 journalists, including two reporters from major British daily newspapers, to the tour, which was intended as a pleasure trip.

After taking off from Düsseldorf, the airship initially set course for Solingen. At 8:35 am, the guests were served a champagne breakfast with caviar . At 8:45 a.m. the port aft engine failed . An hour later the airship reached Remscheid . Due to increasing winds, the attempt to get back to Düsseldorf via Elberfeld failed . So they tried to go north-northeast in the direction of Dortmund to land there. Heavy rain set in at 11 a.m. and the zeppelin was driven north-northwest. The crew decided on Münster as the next landing site . When the airship was over Lüdinghausen at 12:15 p.m. , a storm came up. Now they wanted to cross the Teutoburg Forest in order to land north of the mountain range in Osnabrück .

At 1.30 p.m. , the third engine was restarted via Kattenvenne . Now the crew decided again in favor of Münster. The "Deutschland" was in storm over Ostbevern until 4:30 pm. The fuel lasted only two to three hours. Osnabrück was the last resort. An eyewitness reported: “There was a sulfur-yellow wall of clouds above the Teutoburg Forest. When the ship plunged into the clouds, it was torn from a height of 300 m to 1050 m. Snowflakes swirled around the 'Germany'. The passengers were calm the whole time and weren't even aware of any danger. ” Shortly after 5 p.m., the zeppelin appeared under the clouds. Then the front engine cut out. The "Deutschland" crashed into the coniferous forest near the town of Bad Iburg , Limberg . The airship stuck in the branches of the trees eight meters above the forest floor.

The crew members lowered a rope ladder and passengers and crew left the wreck. The accident did not claim any human life; one crew member suffered minor injuries while leaving the airship.

Graf Zeppelin arrived in Osnabrück the next morning by express train. A crowd gathered at the hotel where he was staying to cheer him. Zeppelin appeared several times at the window and thanked him. He no longer drove to the difficult-to-access accident site on the Limberg, a good 15 kilometers away, because the clean-up work was largely over. Initially, 50 workers from an Iburg wire rope factory, fitters and soldiers from Osnabrück and Münster took part.

The accident attracted widespread attention, but did not affect the further development of the Zeppelins. The engines from LZ 7 were later installed in LZ 8 .

The first press reports about the accident appeared shortly after the crash on June 28, 1910. Because reporters from national newspapers also came along, numerous eyewitness reports appeared. The population in the nearby city of Osnabrück was informed about the event through special leaflets.

The Osnabrücker Zeitung reported on the scene of the accident on June 29, 1910: “Just a few more steps through the forest and you were standing in front of the front part of the gigantic one and a half hundred meters in length and yet almost transparently light airship body. […] There were gaping cracks everywhere, the shell was ripped open by the trees. […] The front fork was still more or less intact, and the cabin had not suffered any significant damage either. But then suddenly a break from top to bottom! The rods were splintered, the shell completely torn here, the pieces lay all over the floor. The interior of the airship was open. Thick fir trees towered up inside and had destroyed the Bolconets. "

The crash had already attracted the curious en masse to the mountain on the day of the accident. The Osnabrücker Zeitung reported: “What the disaster of the 'Zeppelin' means for the population is soon to be recognized here as well, how the people from Bielefeld, from all sides, by train, on horse-drawn vehicles, with automobiles, bicycles and Münster, Osnabrück etc. came over. Then it came to life on the narrowest forest passages of the otherwise lonely mountain. " 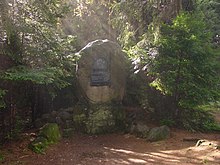 The memorial stone on Limberg 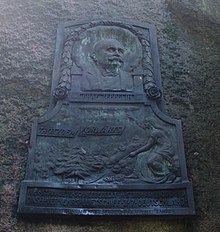 Detail of the memorial stone; Relief panel by Heinrich Wulfertange

In the collective memory of the people of Bad Iburg and the surrounding area, the memory of the accident is still alive today. On the Osnabrück plateau, Heinrich Künne from Iburger described what his father told him about the accident:

“ I still weet like van Daage, siär use cardboard, os ik de mighty cigars, wondering about the friar for the gloomy clouds in the air. Up eenmol sackede he nau unnen weg and you couldn't see anything else - Et duerde garnich long do germinate de Lüe met Fahrriäer, met Piärd and Wagen un also to Foote, and se röpen: 'De Zeppelin is unnergaun, do buorben up' n Limbiärge mot he liggen. "

"I still remember today," said our father, when I saw the mighty cigar standing in the air at an angle above the Freeden in front of the dark clouds. All of a sudden it sagged and you couldn't see anything. - It didn't take long before people came by bicycles, by horse and cart and on foot, and they shouted: 'The zeppelin has crashed, it must be up there on the Limberg. "

In 1911 the Teutoburg Forest Mountain Association erected a memorial stone at the site of the accident . The bronze plaque bears the inscription "The first airship Z 7 'Germany' was stranded here, covered in snow in a storm on June 28, 1910 - nevertheless forward -" . The relief panel was created by the Osnabrück woodcarver, modeler and sculptor Heinrich Wulfertange (1854–1924), father of Rudolf Wulfertange .

In 2010, on the occasion of the 100th anniversary of the zeppelin accident, the special exhibition “Zeppelin and airship travel” was shown in the local history museum of Averbeck's warehouse in the Glane district of Bad Iburg .