Chiba-Ken is a redirect to this article. For the rock band of the same name, see Chiba-Ken (band) .

The Chiba Prefecture ( Jap. 千葉県 , Chiba-ken ) is a prefecture of Japan . It is located in the Kantō region on the southeast edge of the island of Honshū . The seat of the prefecture administration is the city of the same name, Chiba .

It borders on Ibaraki Prefecture to the north and Tokyo and Saitama Prefectures to the west . The prefecture extends largely over the Bōsō peninsula with the Bōsō hill country ( 房 総 丘陵 Bōsō-kyūryū ) whose highest point is the 402 m high Atago-yama. The northern part of the prefecture is largely formed by the Shimousa Plateau ( 下 総 台地 Shimousa-daichi ), while the fertile Kujūkuri Plain ( 九 十九 里 平野 Kujūkuri-heiya ) extends in the northeast of the prefecture .

The prefecture of Chiba is mainly known because the international airport of Tokyo is located here, near Narita , and also the Tokyo Disneyland in the area of Urayasu .

The prefecture of Chiba consists of the three former provinces of Awa , Kazusa and Shimousa and emerged, after several administrative reforms, on June 15, 1873 from the prefectures of Kisarazu and Imba, which had previously been formed .

The name Chiba means thousand leaves in German and was the name of a ruling family residing in this region between the 12th and 16th centuries.

Chiba is home to the Shinsho-ji Temple , a sprawling complex from the 10th century belonging to the Buddhist Shingon-shū , who are known for their strict asceticism. 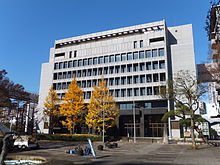 The Parliament Building in the Prefectural Administration Building Complex in the Central District of Chiba City
Political groups in the prefecture parliament (as of April 30, 2019)
A total of 94 seats

Kensaku Morita has been governor of Chiba since 2009 , a former actor and member of the national parliament. He was re-elected for a third term in the March 2017 gubernatorial election. In the 94-member parliament which remained Liberal Democratic Party in the elections of April 2019 45 seats clearly the strongest party and holds non-party / acceding Group members its absolute majority.

In the national parliament Chiba is by 13 directly elected MPs in the lower house represented - in 2017 went twelve constituencies of Liberal Democrats, only in the constituency 4 remained without party nomination nominee Yoshihiko Noda of the Minshintō victorious - and the upper house , the prefecture elects three MPs per constituency and represented in the KDP parliamentary group by four Liberal Democrats and two MPs after the 2016 and 2019 elections and party reshuffles since then (as of August 2019) .

Chiba has partnerships with the state of Wisconsin in the US and the state of Pará in Brazil. Exchange relationships have also existed with the city of Düsseldorf in Germany since 2005 , which led to a partnership being concluded in 2019.

In the table below, the districts are shown in italics, below each (indented) the municipalities within them. The first two digits of the authority code are, as everywhere, the prefecture key of Chiba, the third digit indicates the type of authority as everywhere. The six districts have not had any significance as administrative units since the 1920s, but are still used for geographical division; they were therefore assigned round keys (divisible by 20); the 17 municipalities belonging to the district received consecutive keys; however, due to mergers / incorporations / upgrading to -shi, gaps have arisen in many places. The independent cities are at the beginning of the table. Among them, the capital Chiba, has been a “ major city by government ordinance” since 1992 . Funabashi has been a "core city" since 2003 , Kashiwas followed in 2008.

Traditionally, the prefecture of Chiba is the partner region of the Japan Day in Düsseldorf , which takes place once a year in early summer - a German-Japanese festival with over a million visitors.

Chiba meibutsu ( "known thing") are peanuts. Most of Japan's peanuts are harvested here and also processed into peanut oil.