Sika deer in summer dress, the antlers are still covered with bast skin 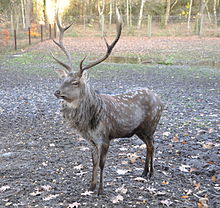 Dybowski deer in winter dress. The elongated mane of the neck and the stain markings that are still visible in winter clothing are clearly recognizable

The Sika deer ( Cervus nippon ; from Japanese 鹿 shika for "deer") is a deer from East Asia that is now naturalized in many parts of the world.

Sika deer are significantly smaller than a red deer and are roughly the same size as the fallow deer . In male specimens they reach a head-trunk length between 95 and 140 centimeters. The withers - / shoulder height is 64 to 100 centimeters, the tail is 7.5 to 13 centimeters long. They weigh up to 80 kilograms. Female animals reach noticeably smaller dimensions and weights.

The sika deer's summer dress is usually red-brown and has numerous white spots that are arranged in seven to eight longitudinal rows. These spots fade in winter and are sometimes barely noticeable, while in summer they are in clear contrast to the rest of the coat color. In winter, a thick mane of neck forms in both sexes. The head is a bit lighter than the mane and the rest of the body. Individual subspecies are darker than the nominate form . The Dybowski deer ( Cervus nippon hortulorum ), which is now very rare in the wild and lives in eastern Siberia, has a particularly dark color. Even in his winter dress, the stain markings can still be made out indistinctly. Sika deer usually wear their summer dress from the end of May. They show the winter dress from September.

All subspecies have in common that the back of the thigh is clearly different from the rest of the coat color. This so-called mirror is whitish and framed by darker hair. The tail end is also white, with a dark line in the middle. This mirror has a signaling effect: excited animals spread the hair of the mirror and thus visually enlarge it.

In the Sika deer, the sense of smell and hearing play a major role. Ten different vocalizations are distinguished, which is significantly more than with most other deer species. This includes a soft, whistling sound made by the female and a bleating sound from the calves. During the rutting season, the male lets out a loud whistle that ends with a loud hum.

Sika deer have large metatarsal organs on their legs, which are always white in their fur. However, it is not known when and how these scent glands are used. During the rut, the males scratch large hollows in which they urinate and then wallow in them.

It can be confused with the fallow deer, which also has a reddish-brown summer dress with a markings on it. However, the shade of red in the most common fallow deer color morph is a rust-colored shade. Older fallow deer can be distinguished from male sika deer by their antlers, as fallow deer develop shovels.

The original range of the Sika deer included the eastern part of the People's Republic of China , Southeast Siberia , Korea , Japan , Taiwan and the extreme north of Vietnam (for details see subspecies ). With the exception of the Japanese Islands, they are threatened almost everywhere in their natural range.

Sika deer have been introduced by humans in numerous areas of the world, for example in Europe, Morocco , northern Mongolia near Süchbaatar , New England , Texas , Australia , Madagascar and New Zealand . In the latter, sika deer were introduced in 1883 and 1885 by an acclimatization society from Great Britain; however, the animals were soon shot down by farmers who feared damage to their cropland. Twenty years later, in 1905, sika deer of two different subspecies were released in another New Zealand region, and they reproduced and spread very rapidly in the region. These animals represent the founding population of New Zealand. Since sika deer shoved very large antlers in this region and thus offered hunters large trophies , a strong hunting tourism developed here. As a result, there have also been illegal reintroductions in other regions of New Zealand's North Island. Today, sika deer are the most important and numerous hairy game on the North Island after the red deer.

In Germany, the sika deer is a neozoon : the first sika deer were introduced as park game in 1893. Since the mid-20th century, escaped and abandoned animals have evolved into wild populations of Sika deer, which are concentrated in the following five areas:

The occurrence on the Upper Rhine (Waldshut district) has also expanded into Switzerland and settles there in the areas of Südranden and Rafzerfeld in the cantons of Schaffhausen and Zurich .

Sika deer are a very adaptable species of deer. They prefer forests with dense undergrowth and also occur in wetlands. Since they are good swimmers, they flee into the water, similar to the barasinghas , to escape their predators.

Sika include the Äsungstyp ago to grazing livestock , they eat in addition to grasses, dwarf shrubs, leaves, crops and tree bark as well as buds and shoots, berries, fruits and acorns. In wetlands they also eat reeds, rushes and aquatic plants. In the regions where their range extends to the coastline, they also eat washed-up seaweed . They also graze on arable land and can cause considerable damage there. Due to their eating behavior, they also cause considerable damage in forests when there is a high population density.

Sika deer are mostly nocturnal. In regions in which they are largely undisturbed, they can still be observed in the morning hours on the awning areas and return to them again in the late afternoon hours.

Adult males are solitary for most of the year, while females and juveniles form associations of mother families of two to ten, rarely fifty animals. Middle-aged deer also form deer troops. In early autumn the males become territorial and begin to gather a harem of twelve females on average. If other males get into the area, they are driven away, which can lead to fierce fighting. Their natural enemies are wolves , Asiatic wild dogs , tigers and leopards .

In its East Asian homeland there are numerous subspecies of the sika deer. In Europe it is usually no longer possible to determine which subspecies the introduced Sika deer belonged to; Most go back to Japanese sika deer, but often different subspecies are likely to have mixed with each other, and in some places there are even interspecific crossings with red deer. A distinction is made between the following subspecies:

Sika deer have been introduced to various regions of the world because they are attractive game game and can survive in regions where the red deer does not thrive. The game on the sika deer is considered a special challenge because sika deer are very attentive.

In New Zealand there have been several attempts to keep the sika deer similar to the red deer in a livestock-like manner, but only a few such herds have existed for a long time. Sika deer are more susceptible to disease than red deer and are more difficult to handle in the gates. Although the meat yield is lower with them than with the red deer, the slaughter costs are the same. Sika deer therefore do not play a major role in New Zealand game meat production.