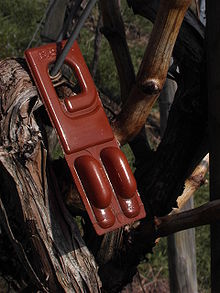 The pheromones are applied in special dispensers . These are often liquid-filled, brown or white plastic ampoules that are attached to the fields or cultivated areas on plants in the shade . Another form are so-called spaghetti dispensers, in which the pheromones are incorporated into the plastic itself and which are tied to the plants like a piece of wire . A spray method is also being experimented with, in which the pheromone is contained in small plastic balls.

The use of pheromones only leads to success if the farmers of several cultivated areas join forces and agree to use this pest control method. In addition, the exact application date must be coordinated with the first flight of the male moths. It is usually determined by the official service using the temperature sum method. The aim of all types of application is to keep the pheromone concentration high enough in the field for several weeks without applying too much pheromone. The pheromone concentration in the air is determined, for example, by means of an electroantennogram .

In Germany this method has been used in viticulture since 1985 to combat grape moth .

The process is considered ecological , as the amount of chemical insecticides can be reduced through the use of pheromones . A positive side effect is the promotion of the population dynamics of the beneficial insects.

Areas of application for the confusion method include:

The confusion method is not to be confused with the attractant trap as used in bark beetles . These traps are covered with glue and attract insects with pheromones.