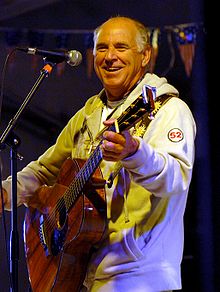 James William "Jimmy" Buffett (born December 25, 1946 in Pascagoula , Mississippi ) is an American country and pop singer, songwriter and author . His best known hit is Margaritaville from 1977.

Buffett was born in 1946 to James Delaney Buffett Jr. and Mary Loraine Buffett near Pascagoula, Mississippi and grew up in Alabama . He graduated from Auburn University and the University of Southern Mississippi in Hattiesburg, Mississippi, where he graduated in 1969 with a degree in journalism. In the same year he married Margie Washichek; the couple divorced in 1972. Buffett has two daughters and an adopted son with his second wife, Jane.

Buffett decided to become a country musician and moved to Nashville , where he first wrote articles for the music magazine Billboard . Through the contacts made there, his first album Down to Earth was released in 1970 and Highland Cumberland Jubilee in 1972 , with moderate success with critics. After his divorce, he moved to Key West , Florida . In 1973 the album A White Sport Coat and a Pink Crustacean was released , a respectable hit that tells of life in the Florida Keys . Buffett's breakthrough came in 1974 with the single Come Monday , which placed 30th in the US charts. Buffett's music mix of country, Caribbean sounds and catchy pop melodies was well received by the audience; more successful publications followed. In 1977 he released his biggest hit Margaritaville from the album Changes in Latitudes, Changes in Attitudes , followed in 1978 by the single Cheeseburger in Paradise from the album Son of a Son of a Sailor .

In 1979 Buffett turned more to mainstream rock with the album Volcano , which he had a few more albums follow in this direction in the following years; he could not build on the success of the previous records. In 1985, Buffett opened the first Margaritaville restaurant in Key West . In 1988 he made a name for himself again when he brought guest musicians such as Rita Coolidge , the Neville Brothers , James Taylor and Steve Winwood into the studio for his album Hot Water . In the early 1990s he founded his production company Margaritaville , followed by the Mailboat Records label in 1999 .

In 2003 Buffett's duet It's Five O'Clock Somewhere together with Alan Jackson achieved the first number one position in the country charts, the song was awarded a Country Music Award and a Grammy . Jimmy Buffett's 39th album License to Chill rose to # 1 on the US pop charts in July 2004. In 2006, in addition to a live DVD called Live at Wrigley Field , Buffett's album Take the Weather With You was released , which reached number 1 in the American country charts in October of that year and was also briefly at number 4 on the pop charts. In December 2009 the album Buffet Hotel was released . It rose to number 17 in the pop charts, number two for rock albums and number one for “independent albums”.

In 2010 Buffett released another double live CD: 22 pieces can be heard on Encores , which were played at the concerts of the 2008 and 2009 tours as the last encores - mostly by Buffett solo or in a small cast. The CD was released on April 20th and is only available on his own website and in the US at Walmart. Encores reached number 7 on the Billboard charts. His 27th studio album Songs from St. Somewhere was released in August 2013. The first single was "Too Drunk to Karaoke", a duet with Toby Keith . Also represented as guest musicians are Mark Knopfler and Emilio Estefan, Gloria Estefan's husband , as well as the Colombian singer Fanny Lú. So far the last studio album was the Christmas album Tis the Season (2016); In 2017 Buried Treasure: Volume 1 was released , a compilation of previously unpublished recordings from the musician's early days.

His live performances are still successful. Buffett has a loyal fan base he calls "Parrotheads" (parrot heads) or "Landsharks" (land sharks). According to an evaluation of the "Top Touring Artists of the Decade" by the US magazine Billboard , he achieved gross sales of more than 215 million US dollars between 2000 and 2009 and is therefore in 22nd place. A calculation by the ticket agency Pollstar puts him in 10th place in the whole of North America with a turnover of 285.8 million dollars. During this time he gave almost 200 shows with more than 4.5 million viewers. Buffett gives most of the concerts in the USA. In Europe he has only appeared in London (1997 and 2009) and in Paris, where since 2007 he has played between one and four concerts almost every year in September. Concerts in Dublin (Ireland), London and Paris are planned for September 2019.

Career as a book author

Buffett is a successful author in the English-speaking world. In Germany only two of his works have so far been published by Ullstein: Cuba Libre (1993, original: Where is Joe Merchant? ) And Margaritaville (1996, original: Tales From Margaritaville ). Both were at the top of the US bestseller lists for months.

He also wrote A Salty Piece of Land (2004) and Swine Not? (2008), the children's books The Jolly Mon (1988) and Trouble Dolls (1991) together with his daughter Savannah Jane Buffett, as well as his 1999 autobiography entitled A Pirate Looks at Fifty . This reached number 1 on the New York Times non-fiction list ; Buffett became the sixth author to take the top spot in both non-fiction and novels (with Where is Joe Merchant? and Tales From Margaritaville ). Before him, Ernest Hemingway , John Steinbeck and Irving Wallace, among others, succeeded in doing this .

In 1996 Buffett was shot at with his seaplane The Hemisphere Dancer (a Grumman HU-16 Albatross ) shortly after landing in the sea near Negril in Jamaica by the Jamaica Constabulary Force . Authorities mistook the flight for a drug shipment. Also on board were U2 singer Bono with wife Ali and their children, as well as Chris Blackwell , the founder of Island Records . All occupants were uninjured, the plane had a few bullet holes; it can be seen today at the Margaritaville Cafe in Orlando . Jimmy Buffett wrote a song about the incident: Jamaica Mistaica , released that same year on the album Banana Wind .

On January 26, 2011, Buffett fell headlong off the stage at the Hordern Pavilion after performing in Sydney . When he wanted to say goodbye to his fans after the last encore, he was blinded by the sudden flare of the spotlights and overlooked the edge of the stage. After the fall, he had to be hospitalized with head and arm injuries. A concert scheduled in New Zealand three days later had to be canceled.

On April 6, 2011, the Florida House of Representatives passed resolution 9063. This declares April 16 to be the official "Jimmy Buffett Day" for Florida. On April 16, the first Jimmy Buffett Day was celebrated with the start of the 2011 "Welcome to Fin Land" Tour in Tampa, Florida.

In season 2, episode 10 of the Hawaii Five-0 TV series (title: Wrong track, in the original: Ki'ilua), Buffett made a guest appearance as helicopter pilot Frank Bama , who is part of the Hawaii Five-O team in North Korea helps. Buffett invented a character named Frank Bama for his book Cuba Libre , but there Bama is an airplane pilot. The Hawaii-Five-O episode first aired in the US on November 21, 2011 on CBS ; in Germany it was to be seen on April 1, 2012 on Sat.1 . In the following years Buffett impersonated the role of Frank Bama in six other episodes.

Buffett made a cameo in the movie Jurassic World .

Before the 2018 NFC Championship Game between the New Orleans Saints and the Los Angeles Rams , he sang the American national anthem .