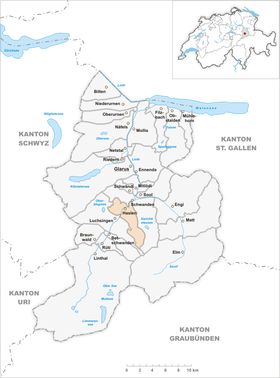 Haslen is a former political municipality in the canton of Glarus in Switzerland .

In honor of Rudolf Stüssi , the colors of Zurich can be found on the left side of the coat of arms. The right side, a lion with a hazel tree in its paws, is reminiscent of the hamlet of Leu.

The approximately two and a half kilometer long village of Haslen is located in the Glarus hinterland, in the Grosstal, on the right side between Hätzingen and Schwanden at the foot of the Freiberg Kärpf . The hamlets Büel, Oberhaslen, Leu, Zusingen and Mülibächli belong to the community. Of the community area, 45.5% is agricultural land, 43.9% is forest, 2.8% is settlement area and 7.8% is unproductive.

Since July 1, 2006, the area of ​​the formerly independent municipalities Leuggelbach and Nidfurn belonged to the political municipality Haslen , before it was incorporated into the municipality of Glarus Süd .

Old coat of arms of Haslen

Haslen is first mentioned in a document as Hasla around 1350 . The Säckingen monastery owned large estates in Haslen until 1395. Until the construction of the church in Schwanden in 1349, the Haslers were part of the church in Glarus . In 1528 the inhabitants converted to the reformed faith.

In 1896 the separation from Diesbach took place , so Haslen became an independent municipality.

On July 1, 2006, the previously independent municipalities of Haslen, Leuggelbach and Nidfurn merged to form the new municipality of Haslen. At the same time, the new overall community received a new coat of arms.

Rudolf Stüssi's birthplace , the Stüssihaus, is in the hamlet of Zusingen. Stüssi was mayor of the city of Zurich at the time of the Old Zurich War . He fell defending the Sihl Bridge in 1443.