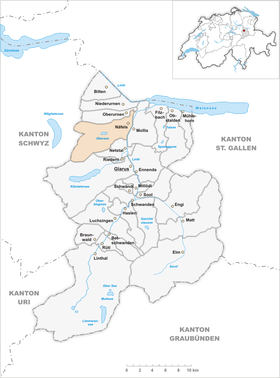 Näfels (in the highest Alemannic local dialect [ˈnæfəls] ) is a town in the municipality of Glarus Nord in the Swiss canton of Glarus .

The mill stream reaches of Netstal , community Glarus , coming in Schneisigen the village. Then it meanders and flows into the Rauti in the Rautifeld .

The place name is first mentioned in 1240 in the phrase Fridericus et Ulricus fratres de Nevels . It goes back to the Romanesque settlement: it is based on the Latin novālis « fallow field ; New land, land newly won by culture ”or its plural novāles . Näfels is a clearing name .

In 1388 the battle of Näfels took place, in which the Confederates defeated the Habsburgs . A memorial and the annual Näfelserfahrt commemorates this battle.

During the Second World War and the Cold War , the Näfels barrier with the Niederberg and Beglingen artillery works had the task of closing the Reduitz entrance towards the Klausen Pass .

The municipality was merged with the municipalities of Bilten , Filzbach , Mollis , Mühlehorn , Niederurnen , Oberurnen and Obstalden to form the new unified municipality Glarus Nord on January 1, 2011 as part of the Glarus municipality reform . Until then, it was the second largest municipality in the canton with almost 4,000 inhabitants.

Näfels is on the Rapperswil - Uznach - Linthal railway line . Thanks to the station in the neighboring Ziegelbrücke , Näfels is also well connected to the main railway line Basel - Zurich - Sargans - Chur .

The A3 motorway (Zurich – Sargans – Chur), which can be reached via the Niederurnen / Glarus junction, runs nearby .

The only confetti factory in Switzerland is in Näfels ; it produces 200 tons of confetti annually.

The modern infrastructure, the diverse range of jobs, the cultural offerings, the proximity to the main town, but also the fact that you can get to Zurich , Chur or St. Gallen via the motorway in a short time , motivated young families to settle in Näfels. The newly created districts Neuweg, Grüt Ost and Erlen Süd bear witness to this development.

Ski areas such as Elm , Braunwald and Filzbach can be reached in a few minutes from Näfels.

The sports center linth-arena SGU and a large sports facility with indoor and outdoor pools are located in Näfels.

As the location of the linth-arena sgu, Näfels has a large number of sports clubs. The arena is also home to the serial champion in men's volleyball, Volley Näfels.