The title of this article is ambiguous. Further meanings are listed under Confetti (disambiguation) . 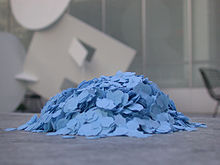 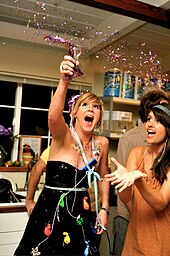 Confetti (in Basel also Räppli , in St. Gallen Rheintal also Punscherli, in Austria Koriandoli ) are small, colorful scraps of paper that are thrown into the air or at people, especially during Carnival parades , but also at other celebrations - such as children's birthdays or weddings . Sometimes a confetti cannon is also used.

The word confetti , which has been attested since the 18th century, is borrowed from the Italian confetti (plural of confetto ) . It denotes prepared, prepared, sugar stuff in the meaning of confectionery . Both words go back to the Latin noun confectum , which is derived from the past participle con-ficere in the sense of getting ready, preparing .

Confetti originally referred to those sweets that masked carnival participants threw at each other, namely sugared almonds , nuts and imitations of ice cream . Consequently, many people associate the term confetti with the events of carnivals, festivals and award ceremonies.

In the paper industry, confetti is a waste product from the perforation of continuous paper , but it is also manufactured as an independent product by some specialized companies. The only confetti factory in Switzerland is in Näfels ; it produces 200 tons of confetti annually.

For the confetti rain, special confetti, so-called slow-fall confetti made of tissue paper or foil, is used, which stays in the air up to ten times longer than conventional paper confetti . Sometimes a hole punch is used to punch out confetti and make it yourself.