The title of this article is ambiguous. Further meanings are listed under Linth (disambiguation) . 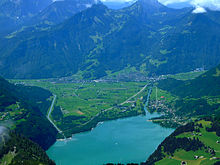 The confluence of the Linth in Lake Zurich near Schmerikon. The dredged former delta now forms the Bätzimatt nature reserve

The Linth is a river in the Swiss cantons of Glarus , St. Gallen and Schwyz .

The Linth is considered the upper reaches of the Limmat . It supplies over two thirds of the water of all the tributaries of Lake Zurich , whose outflow is the Limmat. The Linth rises in the Tödi massif. It takes its name from the confluence of the Limmerenbach and Sandbach, the significantly larger source stream. It rises as Oberstafelbach below the Claridenfirn . In the source area, among others, are the Linth-Limmern power plants with Nordostschweizerische Kraftwerke AG as the majority shareholder. The Linth flows northwards through the Glarnerland and unites in Schwanden with the Sernf , which comes down from Elm . Then it flows through Mitlödi , Ennenda , Glarus , Netstal and Näfels . At Netstal, she records the deletion on the left .

Since the Linth correction, the Linth has flowed in the Escherkanal into the Walensee , which it leaves again at Weesen in the Linthkanal, flows through the Linth plain and flows into the upper Lake Zurich at Schmerikon . At Ziegelbrücke , the industrial canal irrigated by the Rauti and Niederurner Dorfbach flows into the Linth Canal on the left. About 130 meters above the Ziegelbrücke ‒ Siebnen-Wangen S-Bahn bridge in Ziegelbrücke there is a strong rapids. From Ziegelbrücke, a hiking trail, a lateral drainage canal, the 380 kV Tavanasa-Breite and Sils-Fällanden lines (with V-shaped insulators) and other energy routes run parallel to the Linth Canal .

Before the Linth correction by Hans Conrad Escher and Johann Gottfried Tulla , the Linth (then around 32 m³ / s) merged with the Maag (then around 23 m³ / s), the former outflow of Lake Walen , at Ziegelbrücke . From there the Linth meandered strongly and was only partially navigable due to the deposits of sandbanks.

The Linth before the correction

When the Linth still flowed from Mollis across the valley to Niederurnen and Ziegelbrücke, the plain between Näfels, Weesen and Ziegelbrücke was regularly inundated by devastating masses of water from 1762 onwards. The shore regions of the Walensee were not spared either. The trigger was the systematic deforestation of the mountain slopes in the Glarnerland that began in the 18th century. The felled wood was needed as building material, made into charcoal, or served as cheap fuel in the tiled stove or stove. When it rained, debris flows broke loose on the clear-cut steep mountain slopes . This led to a strong increase in bed load in the Linth. In places where the river flows more slowly due to the slight gradient, the sediment carried along is deposited in the river bed. In 1762 the deposits in the Linth plain near Ziegelbrücke were so high that the Maag, which drains Lake Walen over the Linth into Lake Zurich, began to flow backwards. As a result, the lake's water level rose and flooded the areas near the shore. With every major rainfall, areas around the lake and in the Linth plain were flooded regularly. This led to swamping and thus to the destruction of large areas of cultivated land . Due to the frequent floods and high humidity, tuberculosis and malaria increased

The affected cantons of Glarus, Schwyz and St. Gallen consulted the Federal Diet . This commissioned the Bernese engineer Andreas Lanz to renovate the Linth. The estimate of around 90,000 guilders deterred the daily statute.

The Linth is an example of Swiss water corrections . In 1783 the Tagsatzung commissioned a project for the correction of the Linth, which, however, did not lead to concrete construction plans until 1804. The project envisaged the canalization of the Linth from Mollis. The canal should first be led into the Walensee, which was intended as a catchment basin for the debris. The river bed between Lake Walen and Lake Zurich was to be straightened. Construction work under the direction of Hans Conrad Escher began in 1807 thanks to his good political connections. The part of the canal near Mollis, known today as the Escherkanal, was opened in 1811. In 1816 work on the canal between Walensee and Grynau was finished. The tributaries from the Gaster and the March were collected in two canals to the left and right of the main canal, the Linth side canals, which kept the canal free from debris. After the death of Hans Conrad Escher in March 1823, the Zurich government council granted his family the right to use the suffix “von der Linth”. The other work was supervised by the engineer Richard La Nicca from Graubünden . The construction of the canal up to Lake Zurich did not begin until 1866.

The Linth correction lowered the water level of the Walensee by 5.5 meters. The reed and swamp areas between the two lakes continued to be irrigated in a controlled manner until the Second World War to obtain litter. The drainage through drainage only took place through the Linth improvement after 1938 as part of the so-called " cultivation battle "

Linthwerk is the name of the Linth flood protection system created in the 19th century between Mollis / Näfels and Lake Walen (Escherkanal) and Lake Walen and Lake Zurich (Linth Canal). The Linthwerk includes the Linth, all dams, the adjacent side waters (backdrops), forest reserves and meadows in the Gäsi am Walensee.

The responsible management of the flood protection systems is also referred to as the Linthwerk. The Linthwerk is a public institution with its own legal personality

During the floods of the Linth in 1999 and 2005, the dams could only just barely be prevented from breaking. A total renovation of the Linth works was necessary and was implemented with the Linth 2000 flood protection project. The planning period lasted from 1998 to 2008, the execution took place from 2008 to 2013.

The most important goals of the project were to secure flood protection for another hundred years and a partial renaturation of the Linth river. The Federal Law on Hydraulic Engineering, which came into force in 1993, was implemented for the first time in a major project at the Linthwerk . The technical planning was based, among other things, on model tests at the Institute for Hydraulic Engineering, Hydrology and Glaciology (VAW) at ETH Zurich. In addition to construction experts, ecologists, representatives from agriculture, environmental associations and fisheries were also involved in the planning process

The Linthwerk after the renovation

The construction period on the Escherkanal began with the groundbreaking on September 25, 2008 and was concluded with a ceremony on May 14, 2011. The work included strengthening and, in some cases, increasing the flood protection dams between Näfels / Mollis and Lake Walen and relief measures in the event of a flood. With the "Chli Gäsitschachen" widening, the Glarner Linth was given its original width and free run on one section of the route. Alluvial forests can also develop in this new natural area. Various forest areas on the Escher Canal have been given the protection status of reserves.

The construction work on the Linth Canal lasted from 2008 to 2013. In order to protect the Linth area from a 100-year flood, various measures were taken: The dams of the Linth Canal were widened and thus strengthened over long stretches by adding material. In tight spaces, the existing dams had to be removed in parts and rebuilt using material with more favorable geotechnical properties. The widening of the dam resulted in the relocation of the lateral waters.

With the construction of the widening in the «Hänggelgiessen», the Linth got more space to develop. An emergency relief weir was also built here as a safety precaution for extreme floods. In an emergency, it diverts the excess water masses into the enlarged back ditch in a controlled manner and thus prevents overflows or dam breaks on the Linth Canal.

The "Hänggelgiessen" expansion is an ecologically important habitat for plants and animals. This is networked with a forest on the opposite bank of the Linth. A new wildlife corridor under the A3 motorway creates the connection. In parts, the previously hard-built banks of the canal have been redesigned to flat banks and thus upgraded in favor of nature. In these zones, the dams are protected from erosion by a concealed sheeting. Because no green areas at the Linthwerk are fertilized, a great variety of plants and animals is developing on the meadows. Professional maintenance and regular controls ensure the flood safety of the facilities and sustainability for nature at the Linthwerk.

The new Linthwerk is a local recreational area for the population and attracts many walkers and cyclists on around 70 kilometers of routes along the canals. There are bathing areas, a campsite, waterways that can be navigated by boats and riding areas. In order to prevent conflicts between visitors and nature conservation, “rules of the game” apply, which are recorded on information boards. Numerous panels and steles provide information about the history, construction and special features of the Linthwerk. Individual bunkers from the Second World War are furnished with pictures, two can be used as panoramic terraces. All sources of information together form an “open-air museum” on the Linth.

Use of the lith channel

The Linth Canal is an official shipping route and is accordingly signposted with shipping signs. Anyone who has a license from the Linthwerk that is subject to a fee can take a motorboat from Lake Zurich to Lake Walen or vice versa.

Despite the strong but steady current, the Linth Canal is popular with water sports enthusiasts. There are several public river baths along the canal . The Linth Canal is also well suited for dinghy , stand up paddling or kayaking . Divers practicing in Linthkanal like the drift diving .

Over 70 bridges cross the Linth.