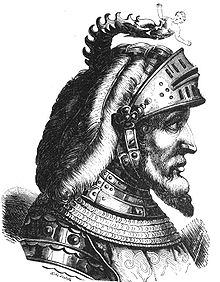 Luchino Visconti (not contemporary representation around 1858)

As a young adult he worked as a military leader . In 1315 he was wounded in the battle of Montecatini . He often fought alongside his brother Marco Visconti . In 1339 he led troops to victory in the Battle of Parabiago . After the death of his nephew Azzo Visconti , he and his brother Giovanni Visconti were proclaimed Signor of Milan in 1339 .

Luchino made peace with the church in 1341, bought Parma from Obizzo III. d'Este and brought Pisa into its dependence. Although he was an able general and regent, he was also jealous and cruel; he was poisoned in 1349 by his wife Isabella Fieschi.

His first wife was Violante von Saluzzo, daughter of Thomas I , Margrave of Saluzzo ; his second wife was since 1318 Caterina Spinola, daughter of Oberto Spinola ; Isabella Fieschi, his third wife, was a daughter of Carlo Fieschi. Lucchino had descendants from these marriages, but they were not taken into account when he died in his successor in Milan.