The title of this article is ambiguous. For the asteroid of the same name, see (1512) Oulu .

While Oulu used to be famous for wood tar and salmon , today the city is best known as a center of the Finnish IT industry and for its distinctive wellness culture . Other important industries are wood processing and papermaking. Within a radius of 200 km there are two integrated steel works (in Raahe and Tornio), a ferrochrome mine (in Kemi) and a pulp mill (in Kemi). The Oulu Airport is the second most frequented on the country and is located about 15 kilometers south, in Oulunsalo . The University of Oulu is the largest in the country outside the greater Helsinki area and is located six kilometers north of the city center.

Oulu is famous for the annual air guitar world championship, the Mieskuoro Huutajat ( The Screaming Male Choir ) and a wide range of cultural opportunities. The Qstock rock festival has been held annually in Oulu at the end of July since 2003.

The name (originally Owla or Oula ) of the city comes from the Sami languages and means something like flood or flowing water .

Oulu was on April 8, 1605 by King Charles IX. founded by Sweden. Just five years after it was founded, the place received city ​​rights . In 1776 the city became the capital of the province of Oulu . After it was almost completely destroyed by a major fire in 1822, it was rebuilt according to plans by Johan Albrecht Ehrenström . In the 19th century, Oulu was one of the most important northern European ports for the export of timber tar, along with Arkhangelsk . This was produced in large quantities in the hinterland, transported in tar barrels across the Oulujoki River and then shipped from Oulu to all of Europe . In 2005, Oulu celebrated its 400th anniversary.

For some years now, due to the technology companies based in Oulu, the number of inhabitants and the city have grown rapidly, so that Oulu is now referred to as the “ boom town ” of the north. In addition, the high birth rate in the Northern Ostrobothnia region, where Oulu is by far the largest city, is contributing to growth. It is 2.38 children / woman, which is more than the 2.1 children necessary for a stagnant population.

The Liberal Center Party is the strongest party with 24.2% of the vote. It has 17 seats in the local council, to which 67 members belong. It is followed by the conservative rallying party, which received 19.9% ​​and received 13 seats. The left alliance has eleven seats, the Green Bund 10 seats, and the Social Democratic Party eight. In addition, the Basic Finns (6 seats), the Christian Democrats and the ASY group (1 seat each) are represented in the municipal council.

Description: The coat of arms is divided into red and silver. Above is a golden tinned castle with two blue open passages on top of which there are golden towers with similar colored pennants pointing to the left and each has a blue window. Below is a red-flooded blue salmon with a red eye swimming to the right .

The city of Oulu has twinned cities with the following cities:

The Turkansaari Open-Air Museum is located 13 kilometers south-east of the city and features 27 historic wooden buildings and a church. Ainola Park, north of the city center, houses the local history museum for the city and province of Oulu, as well as an art museum and a maritime museum.

As in Helsinki , the architect Carl Ludwig Engel also has a share in the historical building fabric in Oulu . After the city fire of 1822, he took over the reconstruction of the cathedral (Tuomiokirkko), which was built between 1771 and 1776 . Above the door to the sacristy is the oldest oil painting in Finland, the portrait of Johannes Messenius . Oulu is also home to the Trinity Orthodox Cathedral .

Southwest of the cathedral is the Neo-Renaissance town hall from 1886. It has a beautiful reception room with Bohemian crystal chandeliers.

Oulu regularly hosts the International Theater Festival for Children and Young People at the end of February .

In the middle of June each year, the Tar Burning Week takes place, an insight into the time when wood tar made Oulu famous.

Since 1996, the air guitar world championship has been held in Oulu as part of the Oulun Musiikki Video Festivaalit ( Oulu Music Video Festival ).

The two-day rock festival Qstock takes place annually at the end of July and is the largest summer event in Northern Finland. 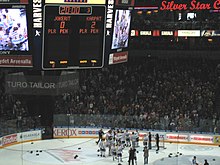 The most important sports facility is the Oulun Energia Areena , home of the ice hockey team Oulun Kärpät and Laser HT . Kärpät is a seven-time Finnish ice hockey champion and was twice runner-up in the IIHF European Champions Cup .

The Terwahölkkä Marathon takes place at the end of May every year , a running event in which over 1,000 running enthusiasts take part.

In addition, there are various events in the areas of winter sports, water sports and fun sports, such as B. the wooden tar rowing in mid-June on the Oulujoki.

The fastest train connection is the Pendolino from VR , it takes 5 hours 44 minutes to cover the 680 kilometers between Oulu and Helsinki. The speed on this route Oulu – Helsinki is different. From Oulu to Seinäjoki (approx. 350 km south of Oulu) it is 140 km / h. From Seinäjoki to Tampere (approx. 180 km) there is a fast connection with 160 km / h. From Tampere to Helsinki (approx. 175 km) the speed is mostly 200 km / h. The reason for these speeds was linked to the goal of getting through Finland as quickly as possible - something that is still being worked on with new lines.

There are direct flights to Helsinki and flights to holiday regions within Europe from Oulu Airport in the neighboring municipality of Oulunsalo .

Oulu has a very well developed network of cycle paths, very often with underpasses under large streets and up to two meters wide. Oulu manages the high cycling share of 12% of the routes in winter and in 2013 is hosting the world's only congress on cycling in winter.

Oulu is an internationally known location for high technology, especially for telecommunications and IT . More traditional industries such as paper and steel are also well represented in Oulu. The focus of today's, future-oriented development work in IT, media technology , bio and environmental technology, as well as in the wellness industry are strongly promoted in Oulu. The production of wood tar that made Oulu famous has largely lost its importance.

Oulu endeavors to encourage the settlement of high-tech companies and ensures this with the availability of building space and good infrastructure .

The University of Oulu , founded in 1958, is one of the largest universities in Finland with almost 17,000 students. It is located five kilometers north of the city ​​center in the Linnanmaa district . The university is divided into faculties for humanities, natural sciences, medicine, education, technology and economics, the largest of which are the faculty of natural sciences and the faculty of technology. Historically, the university played a major role in the boom in the IT industry in the 1990s.

There is also a university of applied sciences with various departments spread over the entire city area and a conservatory. 9000 students take advantage of the opportunity to study in various departments. The Diakonia University of Applied Sciences, which is affiliated with the Protestant Church, offers higher education on its campus in the city center.

Cities and municipalities in Northern Ostrobothnia