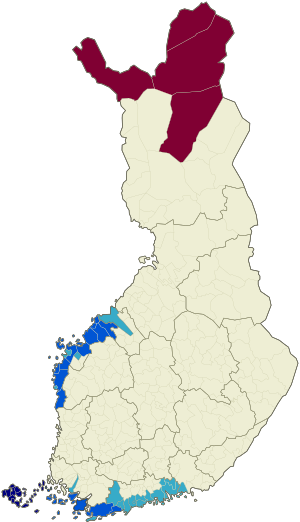 This list contains all Finnish cities and municipalities where Swedish has official status at the municipal level.

In Finland, 90.0 percent of the population speak Finnish and 5.4 percent speak Swedish as their mother tongue (December 31, 2009). Both languages ​​are official languages . At the municipal level, a municipality can be Finnish, Swedish or bilingual. According to the Finnish Language Act, it is bilingual if both languages ​​are spoken by at least 8 percent of the population or at least 3000 people as their mother tongue. A previously bilingual congregation will retain its status until the proportion falls below 6 percent. However, a municipality can also decide to keep bilingualism if the proportion has fallen below 6 percent. Lohja is the only municipality that makes use of this special regulation. The 3,000 person rule was introduced when the percentage of Swedish-speaking residents of Turku (around 9,000 people) fell below 6 percent. In addition, the 3,000-person rule currently applies in Vantaa (around 6,000 Swedish-speaking residents); in the other municipalities, bilingualism results from the percentage.

The language law does not apply to the autonomous province of Åland (Finnish: Ahvenanmaa). The entire province is monolingual Swedish.

According to the current classification, valid until 2022, 16 of the 310 Finnish municipalities are Swedish-speaking (all in Åland). 33 municipalities are bilingual, of which 15 are mostly Swedish-speaking and 18 are mostly Finnish-speaking. The other communities are purely Finnish-, with the exception of 4 communities in Lapland , the bilingual Sami are to Finnish, the language variants North Sami , Skoltsamisch and Inari Sami be used.

In addition to Åland, the Swedish-speaking areas are concentrated on the west coast in Österbotten , the south coast of the Uusimaa region and the archipelago of Varsinais-Suomi .

Bilingual municipalities with Swedish as the majority language

Bilingual municipalities with Finnish as the majority language