Kauniainen [ ˈkɑu̯niɑi̯nɛn ], Grankulla in Swedish , is a town with around 9387 inhabitants in southern Finland . The smallest city in Finland in terms of area (six square kilometers) is a villa suburb of the nearby capital Helsinki .

At the Gallträsk lake in Kauniainen

Kauniainen is located in the southern Finnish countryside of Uusimaa in the suburbs of the capital Helsinki . The cities of Helsinki, Vantaa , Espoo and Kauniainen together form an agglomeration known as the “ Capital Region ”. In fact, they have now grown together into a single large city with around one million inhabitants, and the four cities are still politically independent.

Kauniainen is completely enclosed by the neighboring city of Espoo. Kauniainen is located 15 km west of Helsinki city center. Kauniainen is officially divided into three numbered districts, these have no practical significance in everyday life. The only part of Kauniainen that is generally regarded as an independent district is Kasavuori in the west of the city. 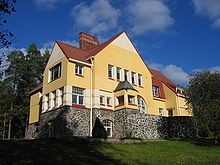 Villa Vallmogård is an example of villa architecture from the early 20th century.

Kauniainen was founded in 1906 under the Swedish name Grankulla as a villa suburb of Helsinki. The quiet place in the middle of coniferous forests was well connected to the capital by the railway line opened in 1903 and soon developed into a preferred residential area for wealthy Helsinki residents. In 1920 Grankulla was raised to a market town . The majority of the then 1300 inhabitants were still Swedish-speaking. The community was not given the Finnish name Kauniainen until 1949. In the 1970s, Kauniainen's population had risen to over 6,000. In 1972, Kauniainen was given city status at the same time as Espoo and Vantaa, and the following year there was a Finnish majority for the first time.

Description of the coat of arms : In the blue shield with three silver-backed golden roses beam as the head of the shield over a golden squirrel hands with red claws and a black thong.

Kauniainen had 8444 inhabitants on January 31, 2007. The population density is thus 1433 inhabitants per square kilometer.

The Finnish Swedes are disproportionately strong in Kauniainen. Until 1973 the city was mostly Swedish-speaking, with the influx from other parts of the country, the proportion of the Swedish-speaking population has declined. Today, 57% of the population speak Finnish and 41% speak Swedish as their mother tongue, which is still significantly more than in the other cities in the capital region. Officially, the city is bilingual with Finnish as the majority and Swedish as the minority language.

The strongest political force in Kauniainen is the Swedish People's Party . In the 2008 local elections, almost half of voters voted for the traditional Finnish-Swedish political representation. In the city council, the highest decision-making body in local affairs, it has 17 of 35 seats. The conservative-liberal collection party is also strongly represented with 14 seats. Left parties are marginal in Kauniainen: The Greens have two MPs, the Social Democrats only got one seat on the city council with an election result of less than three percent. The Christian Democrats are also represented by a member of the city council .

Kauniainen is twinned with the Swedish municipality of Danderyd . Danderyd has a very similar history to Kauniainen, since it was founded as a villa suburb of Stockholm in the early 20th century .

Kauniainen has remained a near-natural garden city to this day, with villas and single-family houses predominating. Due to its attractive location and surroundings, Kauniainen is a popular residential and villa suburb for people in the capital region. The city has the lowest local tax rate in Finland at 16%.

Cities and municipalities in Uusimaa