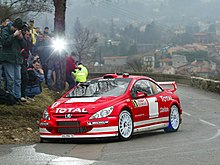 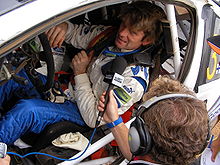 Marcus Grönholm at the 2006
Rally Australia 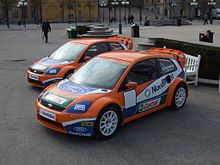 From 1981, Grönholm initially drove motocross for five years until a knee injury prevented him from continuing. Influenced by his father Ulf "Uffe" Grönholm , a Finnish rally driver from the 1970s, who died in an accident in 1981 during training for the Finnish Hankiralli (German snow rally ) in Kirkkonummi , Marcus himself began motor racing .

1987 Grönholm drove its first rally. From 1989 he took part in the races of the World Rally Championship and won a total of 30 World Championship rallies, placing him in third place in these statistics, and he is also the most successful non-French rally driver. In 2000 and 2002 he was world rally champion with Peugeot .

In October 2005 he signed a contract with Ford - factory team . He started for this team in 2006 and 2007 . At the 2006 Monte Carlo Rally , he celebrated the only victory on tarmac. He was thus promoted to the ranks of those pilots who could win rallies on all road surfaces.

Marcus Grönholm announced on September 14, 2007 that he would end his active career as a rally athlete after the World Cup season finale in December 2007 in Wales. Grönholm's long-time co-pilot, his brother-in-law Timo Rautiainen, also announced his resignation.

On April 16, 2008, Grönholm announced at a press conference in Stockholm that he would be participating in at least five of the eleven races of the FIA European Rallycross Championship in the team of his Swedish ex-rally driver colleague Andréas Eriksson, including a 560 hp four -wheel drive Ford Fiesta Mk6 will drive. Ultimately, however, Grönholm only contested three of the five planned races. He was able to conclude his rallycross debut in Höljes ( Finnskogen ), Sweden, with a surprising overall victory. After 2008, the Finn drove other rallycross races, including in the USA at the 2011 Global RallyCross Championship . He also took part in the X-Games 17 in Los Angeles with a Ford Fiesta Mk7 , where he won the silver medal in the rally category behind the Briton Liam Doran and the bronze medal in the RallyCross class behind the two Americans Brian Deegan and Tanner Foust . The Finn had a serious accident at the X-Games in 2012 and had to be cut out of his Ford Fiesta Mk7 by the rescue workers. Many months of recovery followed.

In 2009 Grönholm took part in the Rally Portugal with a Subaru Impreza WRC from Prodrive and in 2010 in the Rally Sweden for the Stobart VK M-Sport Ford Rally Team.

Grönholm took part in the legendary Pikes Peak International Hill Climb in a Ford Fiesta Mk7 with over 800 hp . His team-mate, the Swede Andréas Eriksson, drove a second Mk7 Fiesta. Both pilots decided to mark a new course record on Pikes Peak and to undercut the 10-minute limit for the first time. Grönholm failed due to a technical problem (turbo damage 5 kilometers from the finish, still fifth place with 11: 28,963 minutes) and Eriksson due to a driving error that led to a rollover. 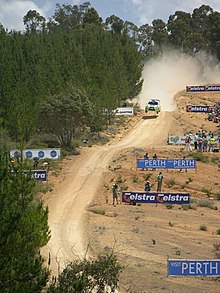 Marcus Grönholm at the 2006 Rally Australia