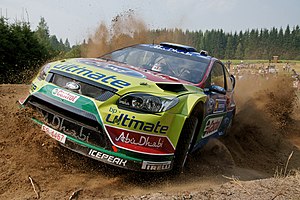 The rally has existed since the 1950s . Originally it was only held as a national event, but it has been the Finnish run to the FIA World Rally Championship for three decades . The rally is known for the high average speeds, its many jumps and the beautiful location of the sections in the middle of the Finnish forests and Lakes.

The rally experienced one of its low points in 1981, when the Austrian Franz Wittmann with his Audi quattro collided with the timekeeper's car in an accident behind the finish line of Special Stage 4 - Ehikki, caught a small group of officials and the President of the Finnish Automobile Sports Association AKK Raul Falin was fatally injured. His compatriot Boris Rung (then President of the European Rallycross Association [ERA] and member of the FIA Off-Road Commission ) and the Greek FIA observer Costas Glossotis got away with the horror.

The most famous special stage of the rally is Ouninpohja , mainly due to its spectacular and long jumps. In 2003 Markko Märtin set the (successful) record of jumping 57 meters at a speed of 171 km / h on this test with his Ford Focus WRC. However, the absolute long jump record of Rally Finland holds since 1975 the Finn and former Rallycross -Pilot Jussi Kynsilehto , who with his co-driver, the rally journalist Martin Holmes from England , in the former SS23 - Raikuu with a Ford Escort far RS1600 72 meters flew - whereupon the car overturned four times and both occupants had to be freed from the destroyed vehicle. Holmes had read the route notes and announced a crest with "full over crest" that was only to come 300 meters further. In 2004, the Norwegian rally driver Petter Solberg exceeded the FIA maximum average speed of 130 km / h, whereupon the 2005 Ouninpohja test was divided into Ouninpohja-West and Ouninpohja-East . For 2008, Ouninpohja was no longer driven for safety reasons. In 2012, the special stage will return to the program of the Rally Finland and will be held as the final power stage.