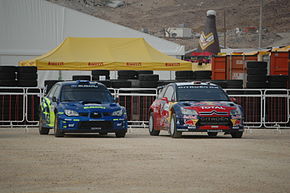 The Jordan Rally was first held in the Middle East Rally, starting from the season 2008 World Rally Championship included in the ranking. This season the rally was also included in the JWRC for the first time . The following year it was not part of the World Rally Championship. For 2010 (also SWRC and PWRC ) and 2011 it was re-included in the World Rally Championship calendar. The former rally pilot, chairman of the Jordan Motorsport Association , Lieutenant General of the Armed Forces of Jordan Prince Faisal bin Al Hussein , who has also been a member of the IOC since 2010 , is a sponsor of this event. In 2008, for example, the “Dead Sea Center” was built out of nowhere in the desert, a 50,000 m² area for the paddock, with the help of the Jordanian Army and the Ministry of Transport, Building and Housing, from where a beautiful one can be built Has views of the Dead Sea . Prince Faisal bin Al Hussein and the rally organizers tried very hard to make the rally a fixed point on the World Cup calendar in the years that followed. This rally is the largest sporting event in the country and it is hoped that it will attract international media interest. Since tourism accounts for around 10% of the gross domestic product and is thus the second most important source of foreign exchange, one hopes for the PR value of the event.

The paddock with the service zone is located around 50 kilometers south of the capital Amman near the Dead Sea, close to the deepest point on earth (which is not covered with water). The special stages will be held in the Jordan desert around the Dead Sea, sometimes at over 40 ° C in the shade. The highest passage of a special stage is just over 1000 meters above sea level. Most parts of the rally take place below zero sea level down to the Jordan Rift (a good 420 m below sea level). This makes the rally an unusual addition to the list of World Rally Championship races. Since all the special stages are comparatively close to the service park, it is also one of the more compact rallies of the world championship. The route itself is quite demanding, however, in 2008 around a third of the vehicles that started retired due to accidents or defects. Two years later, at the 2010 event, the teams and crews had prepared themselves better for these conditions and only five vehicles did not reach the finish line for such reasons. In that year, some special stages were replaced, for example, on the first day they drove north of the capital in the forested mountains of Jordan before heading back into the desert.