The Rallye Deutschland is a motorsport event organized by ADAC . In 2001 the Rally Germany was merged with the Hunsrück Rally. Since the 2002 WRC season , it has been one of the annual races of the FIA World Rally Championship .

The first Germany rally was held back in 1982, the starting point at that time was Frankfurt am Main . Mainz , Koblenz , St. Wendel and Adenau were also the venues later . Trier has been the official start and finish point since 2000. The rally has been part of the World Rally Championship program since 2002 . In 2009 it did not take place due to the FIA's rotation procedure applied that year.

The first winners were German rally driver Erwin Weber and co-driver Matthias Berg with an Opel Ascona 400 . In 1983 he was followed by Walter Röhrl with his co-driver Christian Geistdörfer on a Lancia Rally 037 . Michèle Mouton was the first and so far only woman to win the 1986 rally with co-driver Terry Harryman. This year she also won the Peugeot 205 T16 , the German Rally Championship . In 1997 Dieter Depping scored his third victory at the Rallye Deutschland and is the second most frequent winner after Sébastien Loeb , who won the rally eight times in a row. In 2011, Sébastien Ogier was able to end Loeb's winning streak, making him the second driver to win the Rallye Deutschland as a world championship run.

Spectators at the WP Panzerplatte 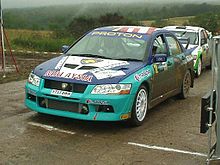 The different routing makes it a "three in one" rally. After the so-called shakedown and traditional show start in front of the Porta Nigra on Thursday, the first stage takes place on Friday in the vineyards. The courses are characterized by short, fast straights followed by sharp branches and switchbacks on a slope.

At the beginning of the second day, the route shifts further south to the Baumholder military training area . The special stage “Panzerplatte” with the “Gina” jump top is on the agenda here. The profile of this day is characterized by medium-speed routes on a mixture of asphalt and concrete slabs. So-called "menhirs" line the route in numerous places. Originally intended to delimit the route for military vehicles, they represent a dangerous obstacle during the rally, so that driving errors can quickly lead to accidents and thus breakdowns.

The third stage consisted mainly of fast tests on the country roads in the region around St. Wendel . In the last few years, the special stages of the third day were set near Trier in the vineyards on the Moselle. The event ends with the award ceremony in front of the Porta Nigra on Sunday afternoon or afternoon. In addition to the changing characteristics of the route, the weather is another challenge.

Since 2007 there has been a Super Special in Trier on Sundays . It bears the name "Circus Maximus" . Here, the participants have to deal with three laps in groups of three over an approx. 3 km long route through narrow streets in the center of Trier. Before 2007 the Super Special was driven through St. Wendel.

The rally center is regularly located in Trier.

The service park was in a different place every day in 2001 (first day in Trier, second day in the Aulenbach camp in Baumholder and on the third day on the shores of the Bostalsee in the municipality of Nohfelden in Saarland), in 2002 only in two places (in Trier and at the Bostalsee), from 2003 to 2006 at the Bostalsee on an area that proved to be problematic, especially in bad weather and because of narrow access roads. Since 2007 he has been back in Trier.

The parc ferme is furnished with one exception in 2004, on the Trier cattle market.

In recent years, the rally has regularly seen well over 200,000 spectator movements. Coping with the flow of spectators is one of the most complex organizational challenges for the organizer every year.

Close to the Parc Fermé on the Trier cattle market, fans can end the evening at the annual brewer festival, for example. In 2006 there was also the chance to take part in the Roman festival "Bread and Games" during the entire rally weekend.

In the event calendar for the World Rally Championship, Rally Germany is characterized by extensive environmental management. As early as the approval process, the organizer primarily examines issues relating to nature conservation law (protected areas are also affected) and water law (e.g. the service park is located in the water protection area) and submits suitable management concepts to the approval authorities. During the event itself, environmental management measures take effect in the organizer, spectator and participant areas.