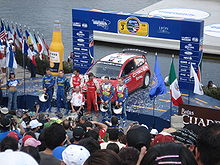 Award ceremony of the Rally Mexico 2008 in the destination León

The Mexico Rally is a classification run for the FIA World Rally Championship and takes place in the country of the same name .

Rally Mexico is based on Rally America, which was launched in 1979 . It has been held as a World Championship run since 2004 . From this point on, the numbering of the rally events began again. The start and end point is the city of León in the state of Guanajuato . It is the first 100 percent gravel rally of the World Cup season. In the special stage from Ortega to La Esperanza, the drivers drive up to an altitude of 2737 meters. This also represents the height record of the World Rally Championship season.