from Wikipedia, the free encyclopedia
This is the spotted version , flagged on August 26, 2019 . There are still template and file changes that need to be viewed. 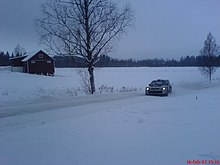 The Rally Norway , which takes place in the area around Hamar , leads over gravel, snow and ice. Their special stages are not quite as fast as those of their partner rally in Sweden . In 2006 the Rally Norway experienced its maiden voyage as a test run for the World Rally Championship and was won by local favorite Henning Solberg . In 2007 she had an FIA World Championship title for the first time .