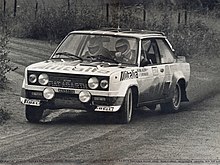 1974 and 1975 Alén drove several podium places with the Fiat 124 Abarth Rally . In 1975 he won the first World Rally Championship round with the Rally Portugal .

In 1977 he won the Manufacturers ' World Rally Championship for the first time with Fiat .

Alén had become the unofficial world champion in 1978 , a year before the official World Rally Championship for drivers was introduced . From 1978 to 1980 he won the Rally Finland three times in a row and again twice in 1987 and 1988 . His most successful career year, 1987, brought him victories at the Rally Sweden and the Rally Greece . His long-term co-driver was, with a few exceptions, Ilkka Kivimäki.

In 1995 Alén drove a few races for Alfa Romeo in the ITC / DTM . However, without any notable success. He competed in the Trophée Andros in 1996 and 1997. In addition, he repeatedly took part in the Dakar Rally . Together with his rally colleague Juha Kankkunen , Alén contested the races for the Finnish Rallycross Championship in a BMW M3 in 2004 and in the end he was runner-up ahead of Kankkunen.

On his 50th birthday, in 2001, Markku Alén entered the Rally Finland again . He finished 16th with a Ford Focus WRC. This was the last World Rally Championship run he contested.

In March 2010, Luca di Montezemolo hired Alén as a Ferrari test driver. Among other things, he did snow tests with a Ferrari 458 Italia.

The young Finnish rally driver Anton Alén is the son of Markku Alén.

The first official driver world title was awarded in 1979.