Juha Matti Pellervo Kankkunen  [ juhɑ kɑŋkːunɛn ] (* 2. April 1959 in Laukaa , Finland ) is one of the most successful rally driver of Motorsport credit history.

Juha Kankkunen's father drove national rallies and ice races . He taught Juha how to drive a car on ice. Kankkunen owned his first car when he was 12 years old. He made his debut in 1979 in the World Rally Championship in Rally Finland . Kankkunen was trained in a Ford Escort RS2000 by Timo Mäkinen , a friend of the family . Timo Jouhki took over the management, who also looked after other Finnish rally drivers like Tommi Mäkinen and later Mikko Hirvonen . Kankkunen won a total of 23 World Championship rallies, finished 75 times on the podium and was world rally champion four times in 1986 , 1987 , 1991 and 1993 . The first round of the World Championship was won by Kankkunen in 1985 , the safari rally in Kenya with a Toyota Celica Turbo TC. He celebrated his last victory in 1999 , the Rally Finland with a Subaru Impreza WRC.

In 1988 Kankkunen won the Dakar Rally with Peugeot . Also in 1988 he won the first event of the Race of Champions . He was able to repeat this success in 1991.

Juha Kankkunen ended his rally career in 2002 with a ninth place in the Rally Great Britain .

Like his rally colleague Markku Alén , Kankkunen took part in rallycross races in Finland for some time in a BMW M3 . Kankkunen finished third overall in the 2004 Super Rallycross Series behind Alén.

In 2010 , Kankkunen made a comeback in the World Rally Championship and competed in Rally Finland with a Ford Focus from the Stobart team. He finished the rally in eighth place and secured four championship points.

Kankkunen grew up on a farm in central Finland. Today he lives in Monaco , but still spends a lot of time on the family farm in Laukaa . He has a large car collection with several Ferraris and all four racing cars with which he was world rally champion. Kankkunen and his wife Pirjo divorced in 2008. 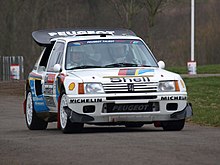