The Audi quattro (also known as the Ur-quattro by Audi ) is a sports coupé from the Audi brand that was produced between spring 1980 and mid-1991. With 11,452 units built, it was one of the first road vehicles with permanent all-wheel drive to be produced in large numbers and was decisive for the success story of Audi's quattro drive and for the use of permanent all-wheel drive in road vehicles in general.

In the mid-1960s, a few road vehicles were equipped with permanent all-wheel drive from Ferguson . These included the Jensen FF presented in 1966 , of which only 320 vehicles were produced, as well as the Ford Zephyr with Ferguson all-wheel drive, of which 22 vehicles were experimentally manufactured for the British police. Because of the high production costs, the latter project was not pursued any further. The production of the Jensen FF was also stopped in 1971.

In the fall of 1971, Subaru launched the L-series, an all-wheel drive road vehicle that was equipped with a switchable all-wheel drive. In September 1979 American Motors introduced the AMC Eagle , whose permanent all-wheel drive worked with a viscous coupling .

Quattro GmbH was founded in 1983 , from then on permanent all-wheel drive was optionally available for more and more Audi vehicles.

Audi itself describes the Audi Coupé S2 model as the official successor to the original quattro .

The word quattro ( Italian for four ) is written in lowercase letters throughout. The original quattro logo also shows only minuscules .

During test drives in Scandinavia in 1977, during which Audi sedans were to be tested, the test manager Jörg Bensinger found that the support vehicle he was driving - an all-wheel-drive VW Iltis ( off-road vehicle , potential successor to the DKW Munga for the German armed forces ) 55 kW (75 PS) - was by far the fastest vehicle in the test fleet under winter conditions. After his return, he reported on his experiences to Ferdinand Piëch , then head of the vehicle development department at Audi. He convinced him to have a prototype with a five - cylinder turbo engine and four - wheel drive based on the Audi 80 produced with a small group of employees .

In 1978 this prototype with 118 kW (160 PS) was so developed that it could be presented to the VW Board of Management . This presentation took place during a test in Austria where winter tires and snow chains were to be tested on other vehicles on a snowy, steep incline. The quattro prototype mastered the incline without any problems - on summer tires . Another demonstration took place in the summer of 1978 in which the quattro prototype was supposed to drive up a steep, heavily watered meadow. Of all the comparison vehicles available for this test, only the quattro prototype mastered the task. A short time later, the VW board gave its approval for the construction.

In February 1979, another prototype, disguised as the Audi 80, was presented to some international journalists in Turrach , Austria. Paul Frère was among them . Two vehicles with winter tires with front-engine and rear-wheel drive and an Audi 100 with front-engine and front-wheel drive were available. While Frère only got around 150 meters on the snow-covered slope when driving the limousine , he even had to slow down in the quattro prototype because the speed reached was too high for this route. When he reached the top, he turned around, drove back and was asked by the development engineer Walter Treser whether he would like to carry out the experiment again on winter tires. Again the vehicle only had summer tires on. During another attempt that day - this time the vehicle was fitted with winter tires - Frère stopped on an enormous slope of 28% with a thick layer of snow and drove on without any problems. It seemed to have impressed him so much that he wrote a book about the Audi quattro and wrote down his experiences in it.

In March 1980 the Audi quattro was presented to the public at the Geneva Motor Show . The vehicle was celebrated as a sensation by the trade press around the world using numerous superlatives.

The body of the Audi quattro is based on that of the Audi Coupé . This in turn was a modified Audi 80 with two doors and hatchback . Externally, the quattro differed from the coupé in that it had widened fenders , more voluminous bumpers , sills and a larger rear spoiler . Some sources claim that the body was partially galvanized in the last few years .

The Urquattro received permanent four-wheel drive with a middle and rear differential lock . Up until the end of 1981, both locks could be operated manually and independently of one another with two claw clutches using cables. From 1982 up to and including 1987 both or only the rear lock could be switched on and off manually electropneumatically.

The quattro has been further revised over the years. In particular, its all-wheel-drive system was refined a little from the 1987 model year with a Torsen medium differential . The rear differential remained manually electropneumatic. These vehicles were ideally suited for winter drives or for other difficult operations on slippery roads (rain, dirt, autumn leaves, etc.).

There were different engine variants for this vehicle, but all quattros had a five-cylinder in - line engine with an exhaust gas turbocharger .

A special variant was the Audi Sport quattro , also known as “the short one” , which was available from autumn 1984 , a significantly more powerful model with 225 kW (306 hp) and 350 Nm torque that has been shortened to 4.16 m body length and is the base vehicle for the Group B cars depicted. The body modification made the wheelbase 32 cm shorter. The dimensions of the body changed to: length 4164 mm, width 1790 mm, height 1345 mm.

The Sport quattro was until the summer of 1985 in a number of reportedly 220 copies (for the FIA - homologation of Group B were prescribed at least 200 pieces mandatory) built and a road version of the then exorbitant price of first 195,000  DM , later 203,500  DM in free Sale offered. However, there is different information about the production figures of the Sport quattro. Audi itself (logically) speaks of 200 vehicles produced, as required by the regulations, and of 20 more cars as evolutionary models. Graham Robson, an internationally recognized British trade journalist, writes, however, that no more than around 160 vehicles were actually produced, some of which, at least less than 20, were modified into evolutionary models contrary to the regulations.

The Audi Sport quattro S1 emerged from the Sport quattro. It was produced in 1984 as the first so-called evolution model in an edition of 20 exclusively for racing purposes. 1985 came the E2, also known as "the wing monster", which was not based on the 20 previously built S1 versions, but was again produced in a number of 20 Sport quattro units as required by the FIA. All of these rally vehicles were not intended for free sale, but were reserved exclusively for the Audi Sport factory department . Only after the FIA banned Group B from the World Rally Championship at the end of 1986 could a few privileged motorsport enthusiasts buy them there.

A particularly extreme variant of the Audi Sport quattro E2 is the "E2 Pikes Peak", with which Walter Röhrl set a new course record on Pikes Peak in 1987 and which is said to have an engine output of at least 441 kW (600 hp). When Auto Racing Rallycross there was the late 1980s and early 1990s some S1 and E2 Rallycross ideas who possessed engines with more than 478 kW (650 hp). The E2 Pikes Peak is still in racing condition and is occasionally shown at representative events, such as the international Arosa ClassicCar 2012 hill climb .

Tuning variants on a quattro basis

The very rare conversion of the Audi quattro Roadster from Treser

The Treser company, which was founded by the engineer Walter Treser , who played a key role in the development of the Audi quattro , converted a few examples into convertibles with a fixed roof, whereby the technology of the roof is comparable to that of the Mercedes SLK .

Audi quattro A2 with Walter Röhrl during the Rally Portugal 1984 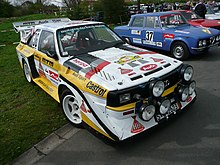