The S4 is the sports version of the Audi A4 . The RS4 is an even sportier variant .

The predecessor of the S4 was the sports version of the Audi 80, this was called the Audi S2 and was manufactured as a coupé , sedan and avant.

The first S4, however, was the sports version of the Audi 100 C4 . When the model names were changed to Audi A x in 1994, the sport versions of the A4 were then accordingly called Audi S x . 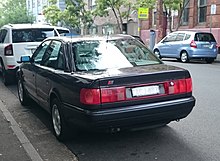 The body of the Audi S4 is largely based on that of the Audi 100 C4 . The front section has been redesigned, the fenders have been widened and thus the front bumper has also been added to this additional air inlets for the flow of air to the charge air and oil cooler. The headlights were replaced by triple ellipsoid headlights. A continuous strip of rear lights was used at the rear. The S4 emblems on the front grille and on the rear of the vehicle also identify the S4.

Standard equipment includes, among other things, the security system Procon-ten and ABS , central locking and electric windows. Inside are sports seats and a three-spoke sports steering wheel with an integrated S4 emblem. In addition, there are three additional instruments in the instrument cluster on which the time, oil temperature and oil pressure can be read. These instruments had a light gray background.

The AAN engine is a revised version of the 3B engine 162 kW (220 PS) that was installed in the Audi S2 . The trunk engine has generally remained the same. Instead of distributor ignition (3B), a single ignition is installed in the (AAN), with this ignition the engine now developed 169 kW (230 PS).

The trademarks of the S models are the logos on the radiator grille and rear, the modified bumpers and the aluminum exterior mirror housings. The latter, however, were only installed towards the end of the B5 series.

Formally presented for the first time at the Mondial de l'Automobile 2002 on the B6 platform and came onto the market in early 2003. The 4.2-liter V8 - induction engine based on the engine of the Audi S8 (D2) and makes the S4 a maximum of 253 kW (344 hp). It was shortened by 52 mm in order to be able to accommodate it in the engine compartment of the mid-range car. For this purpose, the camshaft drive was relocated to the clutch side and the camshafts were driven by chains instead of toothed belts .

Externally, the vehicle differs from the normal A4 variants in terms of modified front and rear bumpers, exterior mirrors in aluminum gloss, protruding door bumpers, S4 emblems and larger tailpipes. From the factory, this S4 rolls on 18-inch wheels and 235/40 ZR 18 tires and is 20 millimeters lower.

The S4 has door sills with S4 lettering, a modified instrument cluster with white pointers, sports seats and xenon headlights as standard .

The car in the version with six-speed manual gearbox accelerates from 0-100 km / h in 5.6 seconds (Avant: 5.8 s; Cabriolet: 5.9 s), according to the factory. The automatic transmission variants need between 0.2 and 0.3 seconds longer for this. The top speed is electronically limited to 250 km / h.

Like its predecessor, the vehicle is equipped as standard with Torsen all-wheel drive ( quattro ) with symmetrical torque distribution (50:50) between the front and rear wheels. It is shifted with a fully synchronized six-speed manual gearbox or with an optional six- speed automatic gearbox ( Tiptronic ), which can be switched using rocker buttons on the steering wheel.

From the B6 generation, the S4 was available as a convertible in addition to the sedan and station wagon.

The S4 B7 was again presented at the Mondial de l'Automobile in October 2004 for the facelift of the Audi A4 B6 as a sedan and avant. The cabriolet appeared in early 2006, which is why the construction time for the B6 and B7 also overlapped.

Compared to the B6, the design and chassis components have been revised. As in its predecessor, the engine has a maximum output of 253 kW (344 hp) and is offered with a six-speed manual transmission as standard. An automatic transmission was available as an option.

Externally, this S4 looks like the "normal" A4 at first glance thanks to the identical front and rear bumpers of the S line exterior package. Only the modified radiator grille, the aluminum-look exterior mirrors, flared door bumpers and four oval tailpipes set this S4 apart from the other models.

In 2005, on the occasion of the 25th production anniversary of the Audi Quattro, Audi sold a special edition of the Audi S4, limited to 250 pieces, which was fitted with the bumpers of the special model known in Europe as the Audi A4 DTM Edition. The drive, however, remained identical to the rest of the Audi S4 of the model year.

Based on the A4 B8 , the fifth S4 generation was presented in October 2008 at the Mondial de l'Automobile in Paris as a sedan and station wagon (Avant). The S4 could be ordered from November 2008, while delivery of the models began in March 2009.

The engine used is a 3.0-liter V6 engine with direct fuel injection and supercharging . This provides a maximum of 245 kW (333 hp) and a maximum torque of 440 Nm at 2900 min -1 . In contrast to the 8 kW (11 PS) more powerful 4.2-liter V8 engine from the previous model, consumption was reduced by up to 3.9 liters per 100 kilometers. A six-speed manual transmission is available as standard, or the new seven-speed S tronic dual clutch transmission is available as an option . There is also a rear-emphasized quattro - four-wheel drive with optional sport differential . The main difference between the S4 and the A4 is its 20 millimeter lower body with sports suspension, silver-colored exterior mirror caps, modified aprons and four-pipe tailpipes.

Production ended in mid-2015 because the model change to the B9 was imminent.

The sixth generation of the Audi S4 based on the A4 generation B9 was presented at the IAA 2015 in Frankfurt as a sedan and station wagon.

As in the predecessor, a 3-liter V6 engine is used. In contrast to the previous engine, the new engine from the VW EA839 series is charged via a turbocharger instead of a compressor. The unit has a maximum output of 260 kW (354 hp); the maximum torque is 500 Nm. A newly developed eight-speed automatic transmission (tiptronic) is used as standard. LED headlights and taillights are also standard.

During the facelift of the Audi A4 B9 carried out in summer 2018, the S4 remained unchanged. He received this in May 2019. In the course of this second facelift, V6 diesel engines were introduced for the versions offered in Europe ; outside Europe, the petrol engine , which has been available since 2016, remains. The diesel engines have a displacement of 3 liters, are turbocharged and also charged with an electric compressor, have a maximum output of 255 kW and a maximum torque of 700 Nm.